It is three years since Hurricane Irma hit Barbuda, the smaller of the two-island state of Antigua and Barbuda. Instead of being allowed to start rebuilding their homes Barbudans were forcibly evacuated to camps on Antigua for 30 days. Despite significant fund-raising, they would have to wait a further year to see education, health, running water, banking and waste management services fully restored. Yet from day one after Hurricane Irma private commercial developments pushed ahead with the support of Prime Minister Gaston Browne. Suspicion that mischief would be done proved well-founded. This disaster capitalism is now delivered as philanthropy, a few jobs sold to Barbudans as worth surrendering their collective island ownership for.

This unique heritage in the Caribbean has allowed Barbudans to hold collective control over the island’s land and resources since the abolition of British slavery in 1834 and Barbudans refusal to pay rent to the island’s owner by the 1870s. Communal possession was formalized in a colonial enactment of 1904 and lasted through the 20th century. This was reinforced by the Barbuda Land Act in 2007. While the Crown remains the symbolic owner of the soil, the law vested exclusive collective possession of the land in Barbudans. As legal land administrator the Barbuda Council allocates exclusive occupancy and use rights for house plots, businesses and farms in and around the single village of Codrington. Under the law the Council may veto requests for land to external investors following full public consultation with the owners – the community.

This arrangement irks Prime Minister, Gaston Browne. He showed his determination to turn his country into what he calls a powerhouse in a deal he made with a Chinese investor immediately he was elected in 2014. This is the Yida Project on Antigua turning 2,000 acres and an associated marine resort into ‘a Chinese colony’ and tax haven. Browne had similar plans for Barbuda. By the time Hurricane Irma hit, the court was already reviewing the legality of his government’s lease of 391 acres to Robert de Niro’s Paradise Found Company backed by Australian billionaire James Packer. The plan is to build a high-end tourist lodge on Barbuda. Without consultation or consent Browne had engineered to lease the land with no term and conditions. Barbudans were also concerned by 2017 about a 99-year lease of environmentally critical land on the southeast of the island (Coco Point) to the Peace, Love and Happiness Partnership (PLH) for a similar facility.

On their return to their island in 2017, Barbudans found an international length runway under construction to service tourist arrivals. See this video: https://globalforwardthinking.org/2020/02/11/help-barbudans-save-their-land/

While kept from returning themselves, both the Paradise Found and PLH enterprises had been busy. Barbudans found the latter surveying to construct 450 exclusive dwellings for ultra-wealthy foreigners, each paying millions for the privilege. PLH has been quick to reconstruct its advertising as helping the island’s recovery, and claim that the hurricane had encouraged them to “immediately advance development plans”. 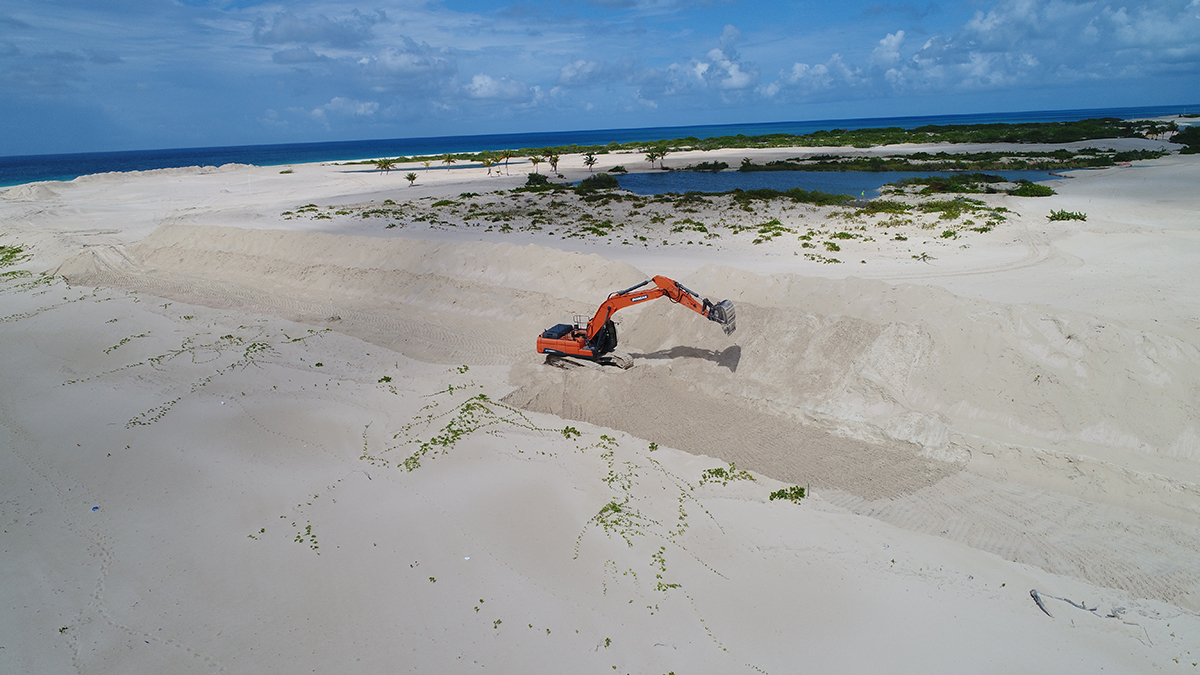 Barbudans still await the legally required consultation. In the Village Meeting that was held about the PLH project in 2016 no plans for Palmetto Point were disclosed. And at a Village Meeting that took place just before the COVID-19 outbreak, Barbudans agreed that they wanted PLH to stop clearing the site. This has not happened so far.

For Browne, PLH will help lift the country out of economic difficulties caused by Hurricane Irma and COVID-19.  He promises his voters to turn Barbuda into the breadbasket of the country, as well as to repeal the Barbuda Land Act to bring an end to the “mythical” communal land ownership that in his eyes hinders development and foreign investment.

Collective land ownership is far from mythical. More than 50% of the world’s lands are communally held. Recognition of existing customary rights is increasingly confirmed through issue of collective title deeds. Palmetto Point is also not the right place for developments as an internationally recognized Category II protected area, and as a RAMSAR site as part of Codrington National Lagoon Park. While PLH promises it is “committed to the land and the people” it is filling in critical wetlands and levelling beach dunes. Wildlife habitats, shoreline limitation on the impact of storms and hurricanes and invaluable ecosytems are being destroyed.

“We call them philanthro-capitalists”, Barbudan activists say. “They come here, pretending to be philanthropists, to help us recover from a natural disaster, but what they do is they use the wealth they have to gain control of our resources. Their mindset is that nature is for them to multiply profits without concern as to our being a part of it and living sustainably.”

The dispossession of Barbudans, the degradation of critical ecosystems for the financial benefit of a few, and justifications that such ‘development’ is in their interest are hardly new. On the contrary, communities around the world are facing the same challenges, curiously accelerated in times of COVID-19. Nevertheless, Barbudans deserve international solidarity to not lose the homeland they have nurtured out of an unwanted history of slavery. Destruction of nature at this critical juncture in climate change for the ostentatious pleasure of a small group of mega-wealthy foreigners is particularly repugnant in this continuing storm. See this video: https://globalforwardthinking.org/2020/09/13/how-will-the-storm-end/