Contracts between governments and private investors for large-scale land, agriculture, and forestry projects often play a critical role in the governance of these projects. Yet, despite their significance, such contracts are often kept hidden from the public eye. Amongst the many initiatives seeking to shed light on these deals, OpenLandContracts.org, an initiative of the Columbia Center on Sustainable Investment (CCSI), works to advance transparency by serving as a centralized online repository of publicly available land, agriculture, and forestry contracts between investors and governments.

CCSI spoke with Lorenzo Cotula and Thierry Berger of the International Institute for Environment and Development (IIED) to discuss OpenLandContracts.org, the challenges and opportunities stakeholders face in promoting greater transparency around land investments, and how effective use of disclosed information can be promoted.

CCSI: Can you describe the work of the Legal Tools team at IIED and how it relates to large-scale land investments?

Lorenzo Cotula (LC): IIED is a policy research institute based in the U.K. that works for a fairer and more sustainable world. The Legal Tools team works to strengthen local rights and amplify voices in the context of natural resource investment by generating evidence of what’s happening, who it impacts, and how the law can act as both the problem and, in some cases, part of the solution. The team also collaborates with partner organizations in low- and middle-income countries to develop, and share lessons from, on-the-ground approaches to support rural people in harnessing the law—whether it’s to articulate their own vision in decision making or law reform processes, secure their land rights, negotiate better terms of proposed investments or devise alternative options to pursue.

CCSI: Have you and the rest of the Legal Tools team used OpenLandContracts.org in your work? If so, can you provide some examples of how you have used the site?

Thierry Berger (TB): Whenever I’ve been looking for or researching land-related contracts from countries in the “global South,” I’ve used OpenLandContracts.org as a first port of call. For example, we relied on your database to research the corporate structures of land deals for a 2015 report that measured the extent to which investment treaties protect agribusiness investments. The site proved to be a very important tool.

Also, the database provides a certain level of quality assurance. The idea of disclosing publicly available land contracts rather than simply publishing leaked agreements encourages state buy-in to the transparency initiative. In addition, the repository is quite helpful as a tool to double-check information from other sources, such as Land Matrix. 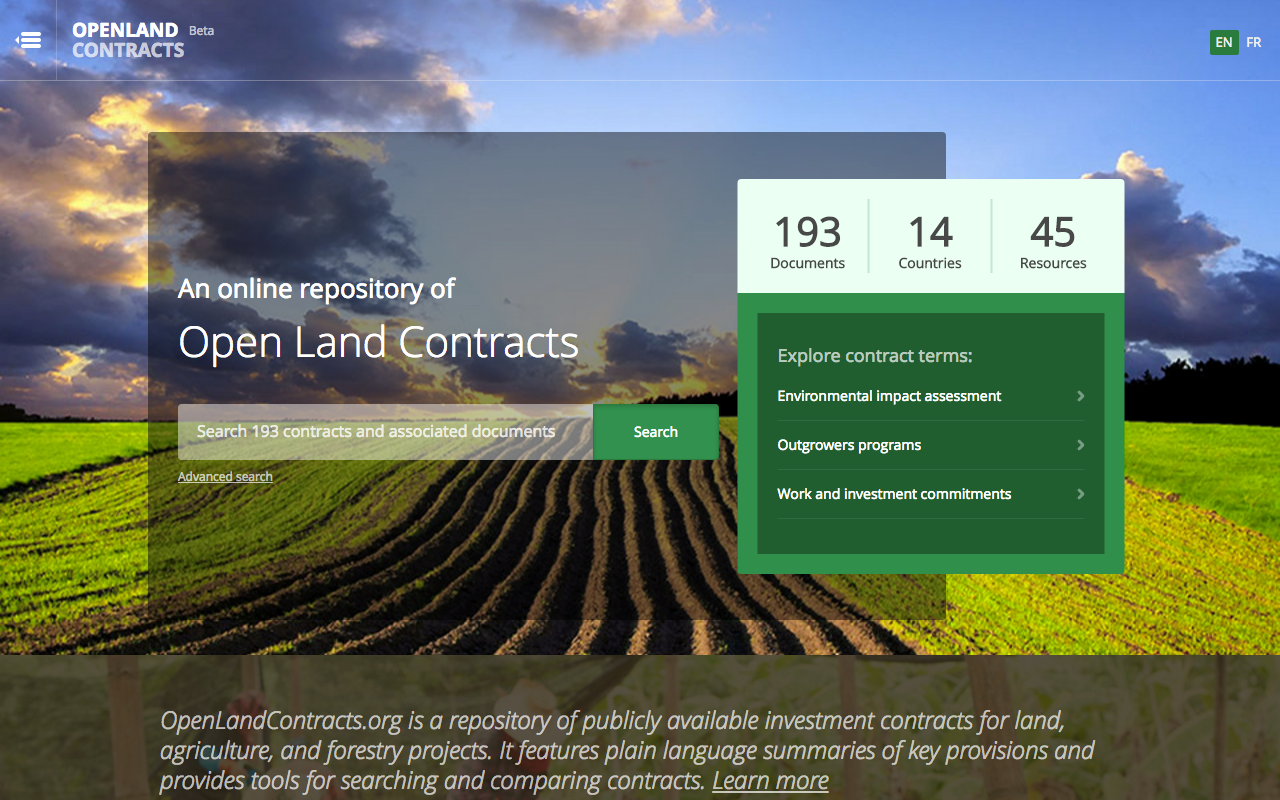 LC: These contracts raise public policy issues, so greater transparency, while not the only factor, is important. OpenLandContracts.org is a resource we can point to in our policy support work: being able to show that contract disclosure is actually happening can help articulate the policy case for greater transparency in countries where contracts are still off limits. Also, an international database where a substantial number of contracts are publicly available is a useful tool for us as researchers to use for our evidence-generation work.

CCSI: Are there specific features or tools on OpenLandContracts.org that you have found useful for your research?

TB: The annotations that OpenLandContracts.org provides for each contract are very helpful for understanding a contract’s key terms. For instance, if I’m looking for specific provisions in a contract, I can find this information easily in the contract’s annotations rather than searching through the text of the entire contract. I’ve also found the links that you provide to other databases, including the Land Matrix and OpenCorporates, very useful. The contracts are organized by country, which is also quite helpful. It’s convenient that OpenLandContracts.org covers contracts related to land investment and that its sister database, ResourceContracts.org, covers oil, gas and mining contracts. Instead of researchers having to sift through a massive database of contracts for every type of investment, you’ve narrowed the field in terms of subject matter, which saves a lot of time and effort. 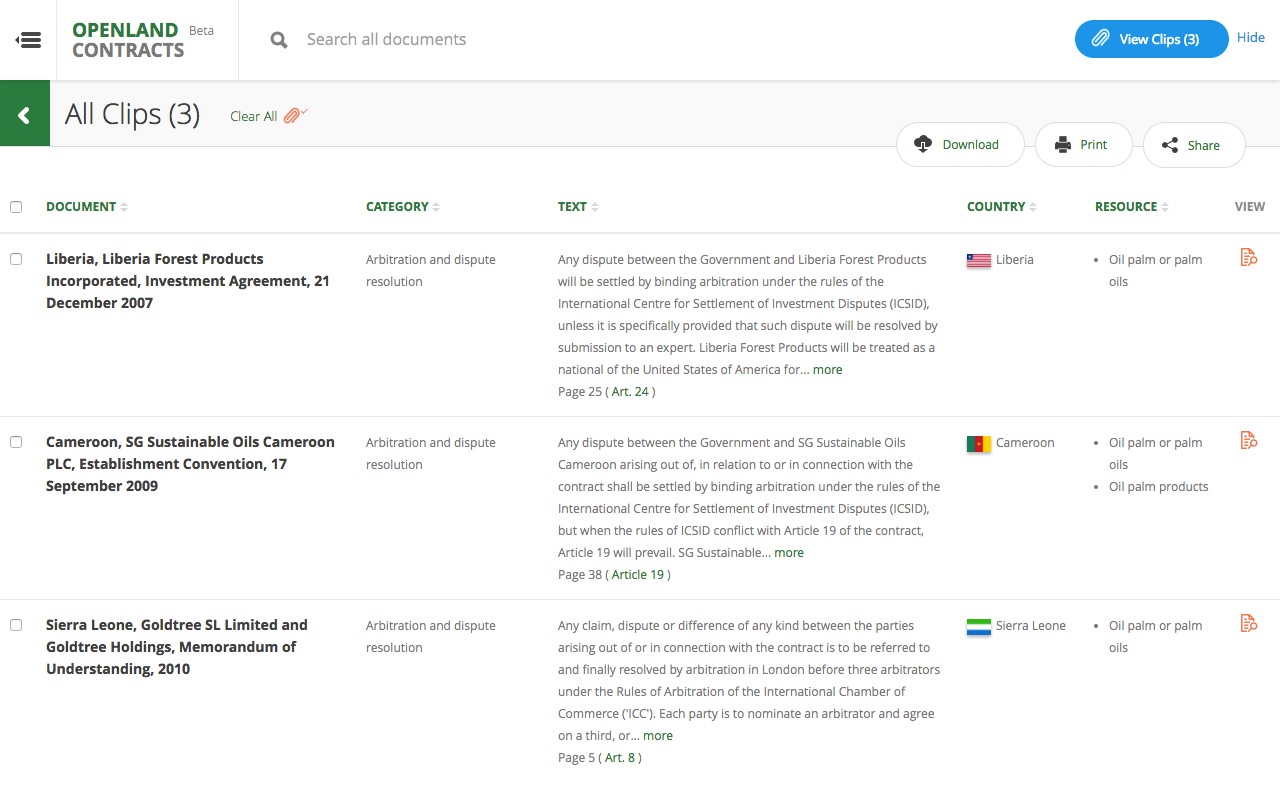 CCSI: Do you see any links between legal empowerment and transparency efforts? If so, can you please describe?

LC: In a recent paper, Thierry and I argued that, when looking at large-scale investments, legal empowerment approaches that operate at the grassroots—legal literacy trainings and paralegal programs, for example—can be powerful; but often, by the time the investment has reached the local level, key decisions will have already been taken, and contracts may have been signed. So legal empowerment interventions may also need to operate at the national and possibly international level. Supporting citizen groups to scrutinize investor-state contracts, to ask questions, and to engage with the investment process is an important part of legal empowerment. A public repository like OpenLandContracts.org can be really useful in facilitating this work.

CCSI: What more can be done by OpenLandContracts.org and other transparency initiatives to promote effective use of disclosed information by stakeholders? Specifically, how can the database have a greater impact on affected communities, their representatives, and the host governments that govern these investments?

LC: The annotations already mentioned by Thierry provide a first tier of commentary that helps “navigate” the contracts. When it comes to using the repository in a legal empowerment context, more needs to be done to make the concepts and issues accessible at the local and national level—for example, learning events with civil society, or small grants schemes to facilitate use of the repository. I know CCSI is already doing work in this direction; for example, your work with DFID [the U.K.’s Department for International Development] to identify and help address legal support gaps around large-scale land-based investment provides an opportunity to tie contract disclosure to legal empowerment. I am also thinking about your work with the Centre pour l’Environnement et le Développement in Cameroon: as I understand it, that work involves helping citizens use the information on the database.

CCSI: Governments and companies are facing more public pressure for transparency related to investments in the extractive industries than they do in regard to investments in land, agriculture, and forestry. Do you think databases like OLC can generate similar pressure to make land contracts publicly available?

TB: As was discussed during a recent IIED webinar that CCSI participated in, OpenLandContracts.org and other online platforms can certainly be used to promote transparency and, ultimately, to strengthen land rights. In the extractive industries context, disclosing countries, investors, and others have seen that initial fears about disclosing contracts were unfounded: instead of facing negative repercussions, disclosing contracts proved to be the right thing for countries to do for a number of reasons. Neighboring countries witnessed this, and the trend toward disclosure increased. So yes, I think that increased disclosure can act as an incentive to publish land contracts as well.

LC: There has been sustained public advocacy for transparency in agri investment contracts over the past few years, but it’s still a relatively recent phenomenon. Public advocacy around extractive industry contracts has been around for longer, so it’s not surprising that there’s more of a critical mass of experience around contract disclosure. If public pressure around land contracts is sustained or increases, we may see more contracts being published on OpenLandContracts.org. And as I mentioned earlier, being able to point to OpenLandContracts.org as an example where this has been done and “the sky has not fallen” can help with the policy case for transparency.

CCSI: Any final thoughts on OpenLandContracts.org and its role in promoting more responsible land investment?

This blog was originally posted on the Earth Institute's State of the Planet, here.

OpenLandContracts.org was launched in October 2015 by the Columbia Center on Sustainable Investment (CCSI) with support from the UK Department for International Development (DFID). The repository currently includes more than 190 contracts and associated documents from 14 countries. To help stakeholders understand these often-complex legal documents, OpenLandContracts.org also provides plain-language summaries, or annotations, of each contract’s key fiscal, social, environmental, operational, and human rights provisions.