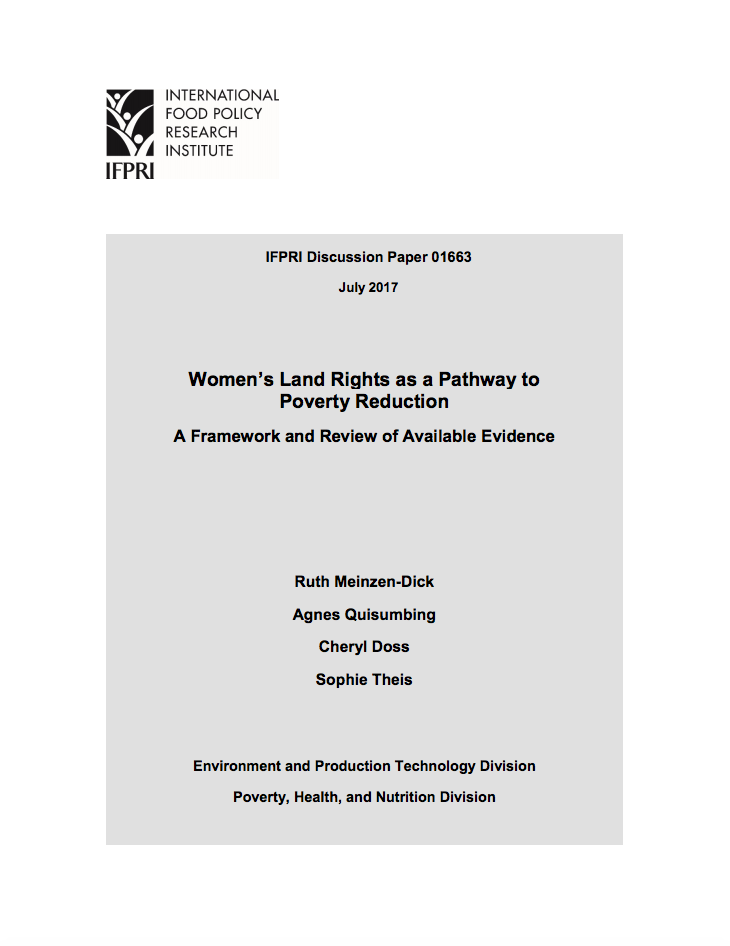 Date of publication:
Julio 2017
Resource Language:
English
ISBN / Resource ID:
01663
Pages:
79
License of the resource:
Creative Commons Reconocimiento-No comercial
Copyright details:
IFPRI holds the copyright to its publications and Web pages but encourages duplication of these materials for noncommercial purposes. Proper citation is requested and prohibits modification of these materials. Permission to make digital or hard copies of part or all of this work for personal or classroom use is hereby granted without fee and without a formal request provided that copies are not made or distributed for profit or commercial advantage and that copies bear this notice and full citation on the first page. Copyright for components not owned by IFPRI must be honored and permission pursued with the owner of the information. To copy otherwise, to republish, to post on servers, or to redistribute to lists, requires prior specific permission.

Land is an important asset for rural households, and having secure land rights is important for poverty reduction. Despite the large body of literature on the relationship between land tenure security, livelihoods, and poverty, most of this literature is based on household-level data and does not consider possible intrahousehold inequalities in land ownership. We know very little about the relationship between women’s land rights and poverty, not only because data on women’s land rights (WLR) are rare, but also because of the implicit assumption that women belong to households that pool resources completely. Thus, it is the land rights of households, not women, that matter for poverty reduction. However, growing evidence that households do not pool resources completely and that women have fewer assets than men warrants attention to the potential role of WLR in poverty reduction. This paper reviews the literature on WLR and poverty reduction. It adapts the Gender, Agriculture and Assets Project (GAAP) conceptual framework to identify pathways by which WLR could reduce poverty and increase wellbeing of women and their households in rural areas. It uses a systematic review search methodology to identify papers for inclusion, but adopts a more synthetic approach to assess the level of agreement and the amount of evidence within this literature. The paper examines the evidence from qualitative as well as quantitative studies on each of these pathways. Owing to the scarcity of experimental studies, the review of empirical work is based mostly on observational studies. We find some evidence on these relationships, but many of the key pathways have not been empirically analyzed. The evidence is strong for relationships between WLR and bargaining power and decision making on consumption, human capital investment, and intergenerational transfers. There is a high level of agreement, but weaker evidence on the relationship between WLR and natural resource management, government services and institutions, empowerment and domestic violence, resilience and HIV risk, and consumption and food security. There is less agreement and insufficient evidence on the associations between WLR and other livelihoods, and a higher level of agreement, but still limited evidence on associations between WLR and credit, technology adoption, and agricultural productivity. Notably, we find no papers that directly investigate the link between WLR and poverty. Many gaps in the evidence arise from a failure to account for the complexity of land rights regimes, the measurement of land rights at the household level, the lack of attention paid to gender roles, and the lack of studies from countries outside Africa. Many studies are limited by small sample sizes, the lack of credible counterfactuals, lack of attention to endogeneity and selection bias, and possible response bias on questions of domestic violence and empowerment. There are very few rigorous evaluations of reforms that strengthened WLR. The paper concludes that gaps in the evidence should not deter the careful design and implementation of programs and policies to strengthen WLR, given the ongoing land tenure reforms in many countries. Different modalities and mechanisms for strengthening WLR could be tested, with appropriate counterfactuals. Program designers and evaluators can strategically identify pathways and outcomes where evidence gaps exist, and deliberately design studies to close those gaps.

The International Food Policy Research Institute (IFPRI) provides research-based policy solutions to sustainably reduce poverty and end hunger and malnutrition in developing countries. Established in 1975, IFPRI currently has more than 500 employees working in over 50 countries. It is a research center of theCGIAR Consortium, a worldwide partnership engaged in agricultural research for development.

The International Food Policy Research Institute (IFPRI) provides research-based policy solutions to sustainably reduce poverty and end hunger and malnutrition in developing countries. Established in 1975, IFPRI currently has more than 500 employees working in over 50 countries. It is a research center of theCGIAR Consortium, a worldwide partnership engaged in agricultural research for development.