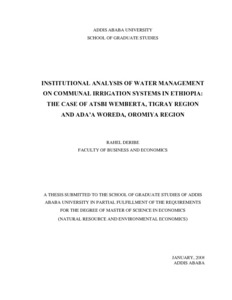 This study analyses the institutional and organizational arrangements of irrigation water management and identifies the determinants of collective action and its effectiveness in managing communal irrigation schemes in the districts of Atsbi Wemberta (Tigray region) and Ada’a (Oromiya region), Ethiopia. Results are based on data collected from a survey of 169 groups (communities) and 22 scheme level focus group interviews. All tabias which have irrigation projects that operated, in year 2006/07 are included. Analysis of descriptive and econometric methods are used. Analysis of qualitative information supplemented the econometric results. Our result reveals that in Atsbi, over 221.1 ha of land, there are 14 irrigation schemes which are used by 1855 beneficiary households. On the other hand, in Ada’a there are a total of 2059 irrigation water beneficiaries in 8 communal managed schemes, which irrigate 960.5 ha of land. Each irrigation scheme is a common property resource that is owned and managed by the community. In both study areas, each scheme has its own water users association which is administered by water users committee. The associations are local institutions which have a basic character of authority and by-laws. In addition, water users form groups at each outlet (block) level for administrative purposes, which are managed by group (block) leaders. They are 94 in Atsbi and 75 in Ada’a. In each irrigation schemes, rotational irrigation is practiced based on counting dates or complaints, but not based on the water need of plants. The econometric results show that collective action is more effective in irrigation water users of Atsbi than Ada’a. We also found evidence for an inverted U-shaped relationship between number of household beneficiaries and collective action. The findings also imply that community irrigation water management can contribute to a more sustainable irrigation water use and as a result in increasing agricultural production and productivity. Collective action for irrigation water management may be more beneficial and more effective in areas with intermediate number of beneficiaries, in areas that are close to market access, in groups that have longer years of experience in irrigation water use, groups with larger family sizes, in communities with greater number of local organizations, and in schemes where there was participation of beneficiaries during construction of the scheme. Though women are found to be significantly involved in irrigation agriculture in male headed households, the revenue generated from agriculture is controlled by men. On the other hand, we found that the participation of female headed households at forum and leadership is very low. However, the estimation result shows that less number of conflicts and violation of rules are associated with high proportion of female household heads. This suggests policy intervention is needed to encourage the participation of women in farm, forum and at leadership level in water users association and in conflict resolution committee. In addition, effort should be made to change the wrong perception of the society towards gender inequality. x Pagex Our evidence also shows that instead of higher level of education status, it is greater number of provision of training which favors collective action. Thus, expansion of training for beneficiary farmers by governmental and non-governmental organizations will have a positive and a significant impact on increasing efficiency water use collectively. In communities that are more remote from markets or have larger number of beneficiaries, private–oriented approaches to resource management may be more effective. Access to formal credit and extension programs have a positive significant impact on collective action. Therefore, emphasis should be given on availability of such institutional support services. The presence of external organizations reduce local efforts to enforce the restricted rules, suggesting that the roles of external organizations needs to be demand driven and complementary to local inputs . Generally, collective action in managing irrigation water functions well in both study woredas. It is found that farm households have started to grow crops which were not previously grown in the areas. It was also found that it has a positive impact on their income as well as on the living standard of their families. In addition, through time beneficiary farm households depend more on the production from their irrigated fields, which enabled them to harvest more than once a year. Therefore, as beneficiary farmers shift to high value but perishable commodities, emphasis should be given to marketing extension, especially in facilitating markets and marker linkages to farmers. Furthermore, through time the demand for irrigation water increases among beneficiary farmers. Therefore, assigning of water rights and strengthening organization and operation of WUAs will be very essential for further efficient use of the common pool resource.

Addis Ababa University (AAU), which was established in 1950 as the University College of Addis Ababa (UCAA), is the oldest and the largest higher learning and research institution in Ethiopia. Since its inception, the University has been the leading center in teaching-learning, research and community services.

Addis Ababa University (AAU), which was established in 1950 as the University College of Addis Ababa (UCAA), is the oldest and the largest higher learning and research institution in Ethiopia. Since its inception, the University has been the leading center in teaching-learning, research and community services.

CGIAR is the only worldwide partnership addressing agricultural research for development, whose work contributes to the global effort to tackle poverty, hunger and major nutrition imbalances, and environmental degradation.