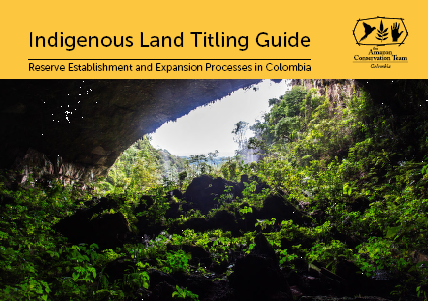 Ensuring the collective survival of indigenous peoples requires guaranteeing their rights and access to traditional lands. In Colombia, indigenous peoples’ struggle for ancestral land rights has been ongoing for more than four centuries, marked by collective mobilization and pressure before official entities.

In Colombia, almost 500,000 indigenous people lack official recognition of their collective land rights. Approximately 700 requests for the expansion or creation of indigenous territories await resolution. In total, these land claims comprise approximately 1,175,000 acres (476,000 hectares) in some of the country’s most biodiverse ecosystems. Despite a progressive national legal framework, recognition of indigenous land rights in Colombia remains a complex process.

For the first time in Colombia, a non-governmental organization has developed a methodology that engages all stakeholders—indigenous communities, local communities, and local, regional and national state entities with competence in the subject—and enables precise execution of complex formal titling procedures, to date achieving the titling of some 1.9 million acres (760,800 hectares) of indigenous lands.

The Amazon Conservation Team® (ACT®) is pleased to publish a primer that illustrates this methodology, and in a practical and detailed manner describes the processes established for the establishment, expansion, restructuring, and internal consolidation of indigenous reserves.

This resource documents crucial acquired knowledge so that other indigenous communities in Colombia can more easily formalize their territorial rights. The document also may serve as an input for other territorial legalization processes in South America.

The Amazon Conservation Team partners with indigenous and other local communities to protect tropical forests and strengthen traditional culture.

We see a future where healthy tropical forests and thriving local communities exist in harmonious relationship with each other, contributing to the well-being of the planet.