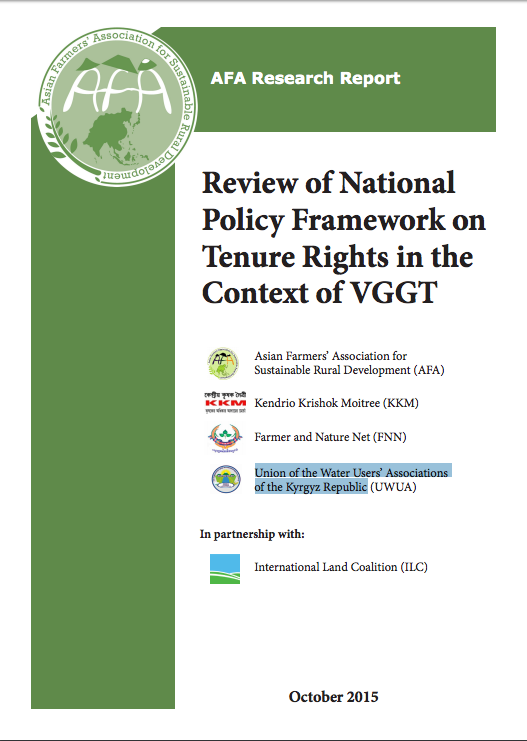 The Voluntary Guidelines for the Responsible Governance of Tenure of Land, Fisheries and Forests in the Context of National Food Security (or VGGT) is the first global document that addresses policy, legal and organizational frameworks that regulate tenure rights. Adopted by the Committee on World Food Security1 (CFS) last May 2012, the VGGT provide guidance on responsible governance of tenure on land, fisheries and forests as a means to alleviate hunger and poverty, enhance the environment, support national and local development and reform public administration.

While the VG has far-reaching potentials, it however needs a strong push at the country level for it to be adapted and effectively implemented. Primordial task is to keep small-scale farmers aware of the VG so that they can exercise their claim-making efforts to pressure government to adapt it. In addition, concerned national government agencies also need to understand and appreciate the VG as an instrument to improve existing legal frameworks in addressing tenure of land, fisheries and forests.

The Asian Farmers Association for Sustainable Rural Development, (AFA) implemented the project entitled “Popularizing the VGGT Among Small Scale Farmers Organizations, Relevant National Government and Inter-governmental Organizations“, with the support of the International Land Coalition (ILC) . The project helped AFA produce country reports that examine national policy framework on land/fisheries/forest tenure and propose how to improve it using the VGGT.

In this publication, we compile the country reports of three partner FOs : Farmer and Nature Net and Farmer and Water Net in Cambodia; Kendrio Krishok Moitree and Action Aid Bangladesh in Bangladesh and Union of Water User Association in Kyrgyztan.

The project itself, which ran from August 2014-August 2015, brought about better understanding of VGGT, more interaction among relevant stakeholders during local, national and regional consultations.

As the AFA members said during the regional consultation last August 2015 in Myanmar, LAND is LIFE . And small scale family farmers, through their organizations will continue efforts to claim their rights on their lands, waters, and forests, with VGGT as a powerful instrument for staking claim.