An estimated 45,000 people have been displaced by the tropical storm, the National Office for Risk and Disaster Management said on Sunday.

After gaining strength in the Indian Ocean with gale-force winds reaching peaks of 145 miles per hour, the cyclone made landfall near Mananjary, 500 kilometers (310 miles) east of the capital Antananarivo, according to the island's meteorology department.

Now that Batsirai — which means help in the Shona language — is on land its winds have slowed to about 80 miles per hour.

Residents of Mananjary the nearby towns of Manakara and Nosy Varika report that the cyclone has caused widespread damage by blowing the roofs off homes, knocking down trees and utility poles, making roads impassable and flooding many areas.

Joellah Razanivomanana had a sleepless night after her home was damaged.

"The roof flew away!" Razanivomanana, 21, told The Associated Press. "We didn't sleep all night. We took shelter under the table and under the bed because we were afraid that the house would fall on us." She said that lots of trees including large coconut palms were toppled by the winds.

"Almost all the houses are collapsed and the roofs are blown off. So almost all of us in Mananjary are affected," Razanivomanana said. 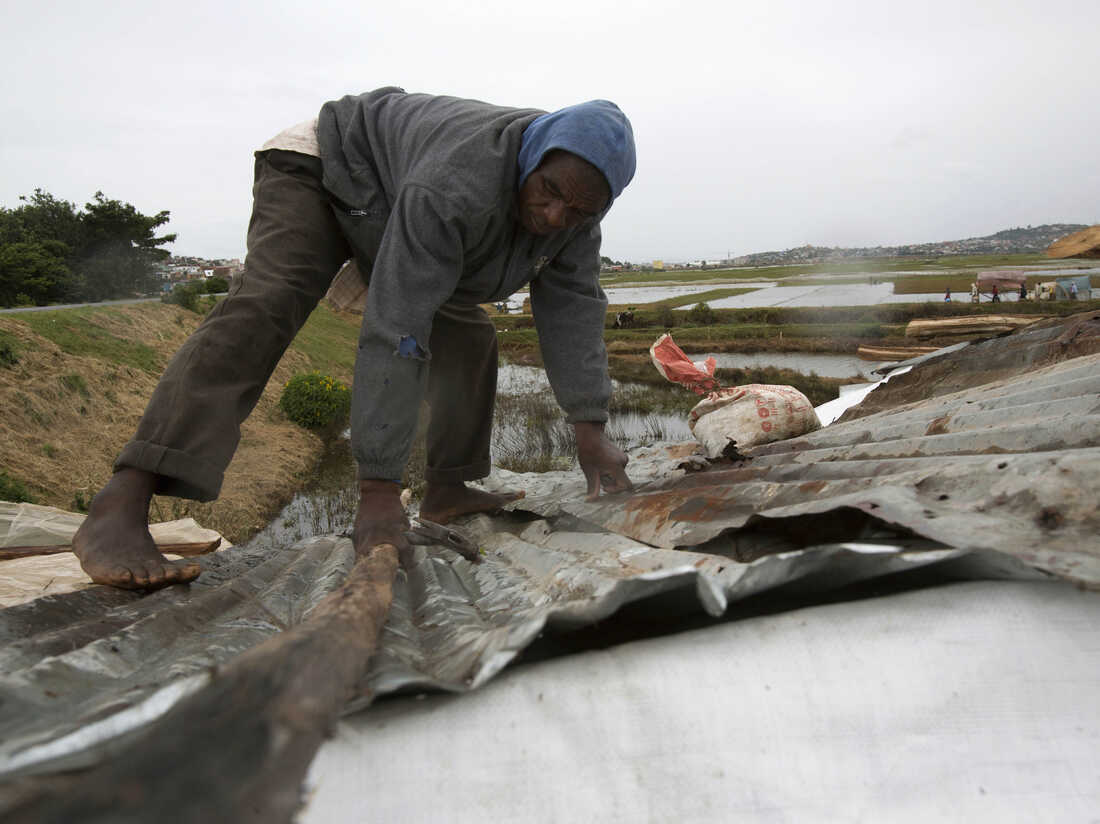 A man secures his home during adverse weather, in Antananarivo, Madagascar, Feb. 5, 2022. After gaining strength in the Indian Ocean with gale-force winds reaching peaks of 145 miles per hour, a cyclone made landfall roughly 500 kilometers (310 miles) east of the capital city on Saturday.

"It's like after a fire. All that remains are the frames of the wooden houses," Razanivomanana said. "Even concrete walls are cracked. Everyone says it's the strongest cyclone they've ever experienced."

"Those who stocked up before the cyclone have something to eat and they sell some of their rice to other people," she said. "We're trying to help each other."

Mananjary is "devastated," Jeremia Razafiharimanana, of the Risk and Disaster Management office said from the coastal town. He said the town has been without electricity since Friday night.

Much of Madagascar is already waterlogged from tropical storm Ana and heavy rains in January and the new cyclone is adding to the damage.

Batsirai is classified as a dangerous storm and is expected to inflict "significant and widespread damage, particularly flooding in the east, the southeast and the central highlands," said the meteorology department in a statement.

Further inland, Antananarivo, the capital, experienced rains ahead of the cyclone and residents put sandbags on their roofs to protect against the winds.

Anticipating widespread destruction, most land and sea transport has been suspended on Madagascar, the world's fourth-largest island.

"Almost all regions of the island are at risk," the National Office for Risk and Disaster Management said, warning that the cyclone threatens nearly 600,000 of the island's 28 million people.