In Liberia, two small communities are fighting to protect their homes, and land rights against a powerful wave of environmentally destructive industries.

Recognising the role that corruption plays in facilitating land grabbing and conflict, Transparency International (the global anti-corruption movement) is working with TIMBY to design technology for communities in Africa to collect and share evidence about land tenure, environmental conservation and corruption.

The TIMBY suite of tools was initially designed for communities interested in monitoring land tenure issues in Liberia. The majority of TIMBY reporters in Liberia were men; however, in partnership with Transparency International — as part of the Women, Land and Corruption initiative — TIMBY have undertaken a complete overhaul of its design, methods, and training materials to make the system more user-friendly and accessible to women.

The partnership and platform redevelopment process began with a project for a small group of women from Nairobi to safely capture verifiable evidence of their dealings with Kenya’s oldest land-buying company. The women are shareholders to 7,300 hectares of land, distributed by a land-buying company as part of a post-independence government resettlement scheme.

According to testimonials collected from the women and documentation TIMBY has uncovered, 90 per cent of the original 3,500 shareholders were women. Since the land was first distributed in the 1970s, it has seemingly been systematically re-sold by the company, resulting in duplicate titles. The original 3,500 titles have now escalated to approximately 19,000. In response, Transparency International and TIMBY have sought to help women speak about their experiences at the hands of the land-buying company and the barriers they have face in defending their land rights.

Bringing the technology back to Liberia

Following the initial stages of a project in Kenya, TIMBY teamed up with Transparency International’s national chapter — Center for Transparency and Accountability in Liberia (CENTAL) — to initiate a new project in the country and further develop the platform to support woman in rural Liberia share stories about how land corruption affects their lives.

In November 2017, CENTAL and TIMBY began working with groups of women in two rural communities; supporting them to report on how women are affected by land corruption. The project has included numerous trainings for women from two communities in Grand Cape Mount County. The participating communities were selected due to the high level of activity by palm oil and extractive industries in the area.

While the women received training in operating the mobile app, they were also supported to explore their experiences and challenges — associated with these high-impact industries — and to develop a reporting strategy to present their stories and gather powerful evidence. The resulting stories are rich in multimedia (photos, videos, and audio recordings) and will be disseminated by CENTAL as part of an advocacy strategy to influence stakeholders, policy-makers, and the general public.

One of the most prominent palm oil companies operating in Liberia has displaced approximately 15,000 people in Grand Cape Mount County alone, with reported incidents of violent conflict between the company’s security personnel and community members. In January 2018, project participants from the community documented the ongoing encroachment of the company’s operations onto the community’s land, together with testimonies from various community members and recordings of security trainings conducted by company officials.

During preliminary engagement sessions, women from community discussed the negative impacts they have experienced as a result of another resource company’s activities a rock-crushing operation — on their health and wellbeing. According to local reports, the process of industrial rock-crushing has caused multiple health issues among local residents including breathing difficulties and even deafness. Furthermore, the powerful explosions used during the process have caused significant damage to local houses.

In 2014, 37 families were made homeless by this damage to their houses and some 12 people had been hospitalized in associated incidents. The company offered to reimburse the community for their damaged houses and medical bills; however, according to local women, the compensation was far from sufficient. 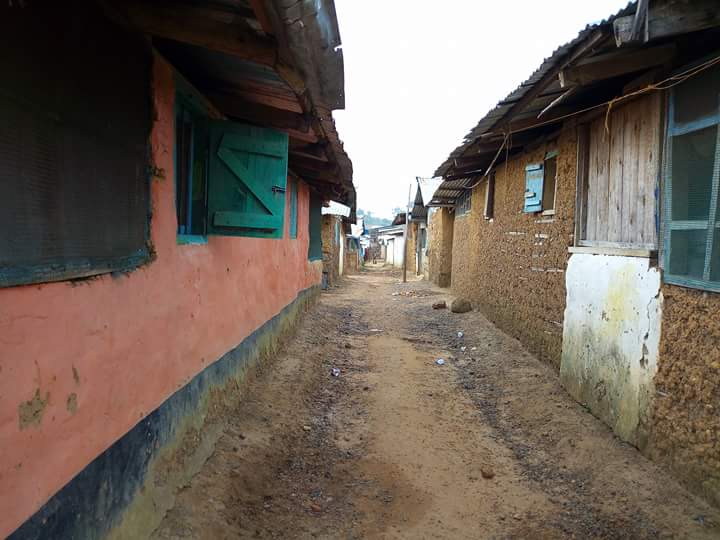 In April 2014, another community was forcefully displaced by the construction of Liberia’s first and largest gold mining operation. The development of the mine destroyed cultural sites and ancestral graves and prevented the community from accessing important areas of bushland. Boundary disputes between the mining company and the community continue to this day, as do disagreements within the community over who should benefit from the resettlement plans.

The company’s Resettlement Action Plan commits to resettle 325 property-owners and to provide replacements (or compensation) for “dwelling and business structures, community facilities, economic trees, agricultural fields, graves and sacred sites located within the proposed mine footprint and associated 500m blasting zone”. However, when the project participants documented a handover ceremony of 280 housing units built by the company in January 2018, none of houses contained bathrooms or even electrical wiring. The medical clinic in the community — also built by the mining company — has also fallen well short of the promises made: it remains un-opened and without staff.

TIMBY is currently photographing legal documents relating to the land acquisition, resettlement plans, and corporate social responsibility commitments. By ensuring that all the documentation is organised and archived in one single repository, this process is intended to assist the town’s residents in holding the company accountable for the impacts of their operations and ensure they realise their commitments to the community. Furthermore, representatives from TIMBY have established contact with company personnel to initiate a dialogue that will continue and deepen once the women’s stories have been published. 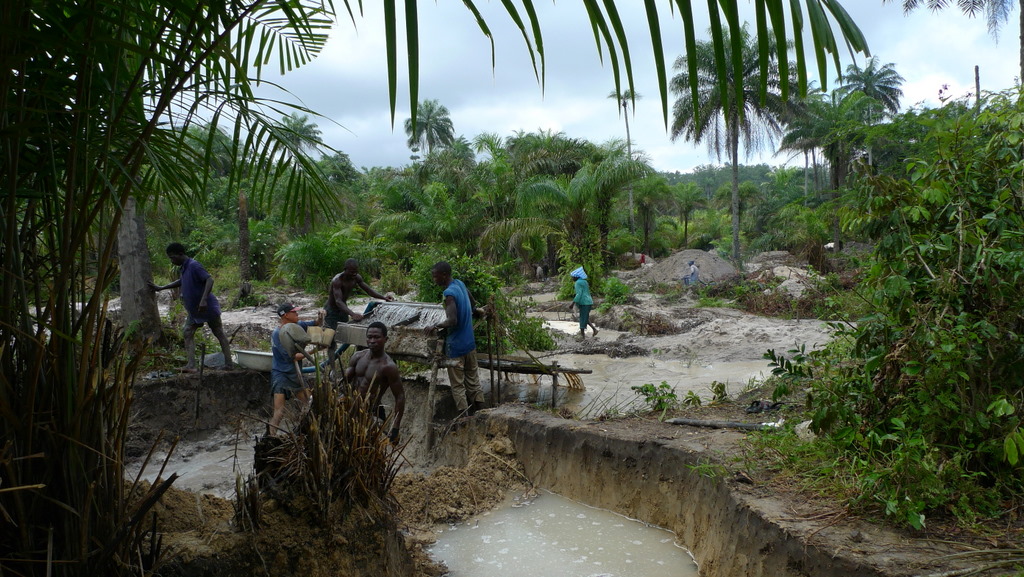 The many and significant differences between land policies in Liberia and Kenya helped to inform the different reporting and impact strategies implemented. For example, Kenya’s Constitution (2010) recognises women’s land rights in customary areas in Section 60, which reads: “[the] elimination of gender discrimination in law, customs and practices related to land and property in land.” As women’s land rights are already recognised — and, therefore, disputes can be taken to court — TIMBY’s approach was to begin with collecting and collating documentation to support the women’s land claims.

In contrast, Liberia’s customary law dictates that land is passed down through patrilineal inheritance. As a result, the majority of Liberian women do not own land. Liberia’s Land Rights Act (submitted to the legislature in 2014, but not yet ratified) will acknowledge customary land ownership by all community members, regardless of gender. Consequently, TIMBY is working with women to monitor issues as they happen in an attempt to slow down the corrupt practices of resource companies and show the disproportionate effect of land corruption on women.

The experience of working with Transparency International Kenya helped the TIMBY team to anticipate many of the challenges of women-only reporting projects in sub-Saharan Africa. For example, community discussions about land in both Kenya and Liberia are typically dominated or controlled by men; older women’s digital literacy levels in Kenya and Liberia were low, and smartphones provided to women for reporting might be taken by their husbands for personal use.

The project team from CENTAL and TIMBY tried to mitigate such challenges at every step. For example, men were invited to the first engagement meeting with the women, so there would be no misconceptions about the project aims, and the men would understand why they would not have access to the phones. Though the men were generally supportive of the women’s project, the women noticeably allowed men to lead the meeting. Some of the women even left the room to work while the men were explaining the community’s issues.

All subsequent meetings were women-only. Creating a safe space for women to discuss land corruption allowed women to speak openly and frankly about their frustrations, particularly about being excluded from discussions and decisions on land matters. For instance, there is a community group in one of the communities that meets to discuss land issues; however, there is no representation of women.

The subjects selected by the women in the communities generally concern the wellbeing of their family and community: houses broken by rock-blasting, violent altercations with resource companies, the illnesses and environmental devastation caused by companies, etc. Some of the women have also identified land inheritance as a key issue facing women, which they would like to document and report on. These concerns differ greatly from the concerns of the men in the same communities, which include issues such as boundary disputes and unemployment. 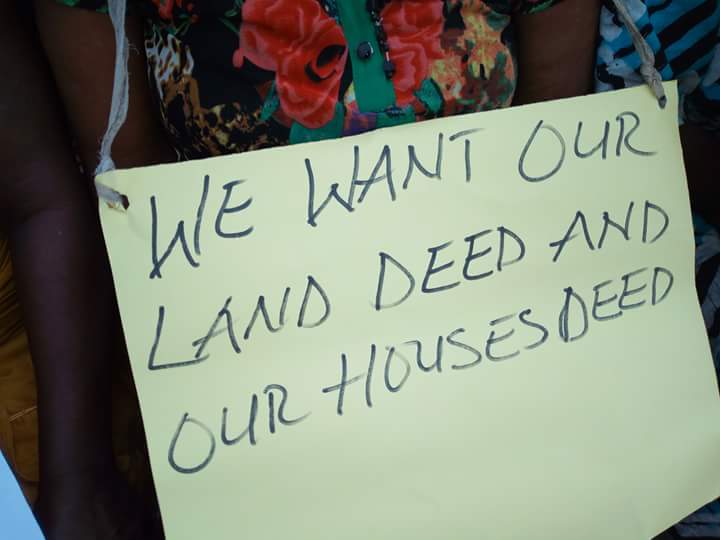 The projects in Kenya and Liberia have each been accompanied by their own unique challenges during the various stages of implementation. In Kenya, the urban setting and long-term nature of the land tenure dispute meant that the group of women were unfamiliar with one another. As a result, a significant proportion of the project’s activities was devoted to building trust and understanding among the women. Unfortunately, the trust that was established among the women was ultimately breached by a participant being pressured into disclosing details of the project to the company, which resulted in the project being paused.

In Liberia, the project team became aware of tribal and social divisions between residents of the old town and new town. Despite attempts to foster understanding and build solidarity across the communities and within the participant group, it became clear that the divisions were so deep-seated that the presence of the technology itself (smartphones) might expose the participating women to significant risks. Therefore, it was decided not to leave the smartphones with community members during intervals between workshop activities.

In contrast, the women in one of the communities are very familiar with one another and their experiences with the two companies. The group’s unity and shared experiences/grievances made it easier to quickly deploy the various reporting platforms and facilitate honest discussions around which stories the women wanted to tell.

Based on the experiences of using TIMBY in both Kenya and Liberia, it is clear that to implement a sustainable project the starting point should be working within unified communities with shared experiences. For more information about the project in the communities, follow the updates on the TIMBY website.