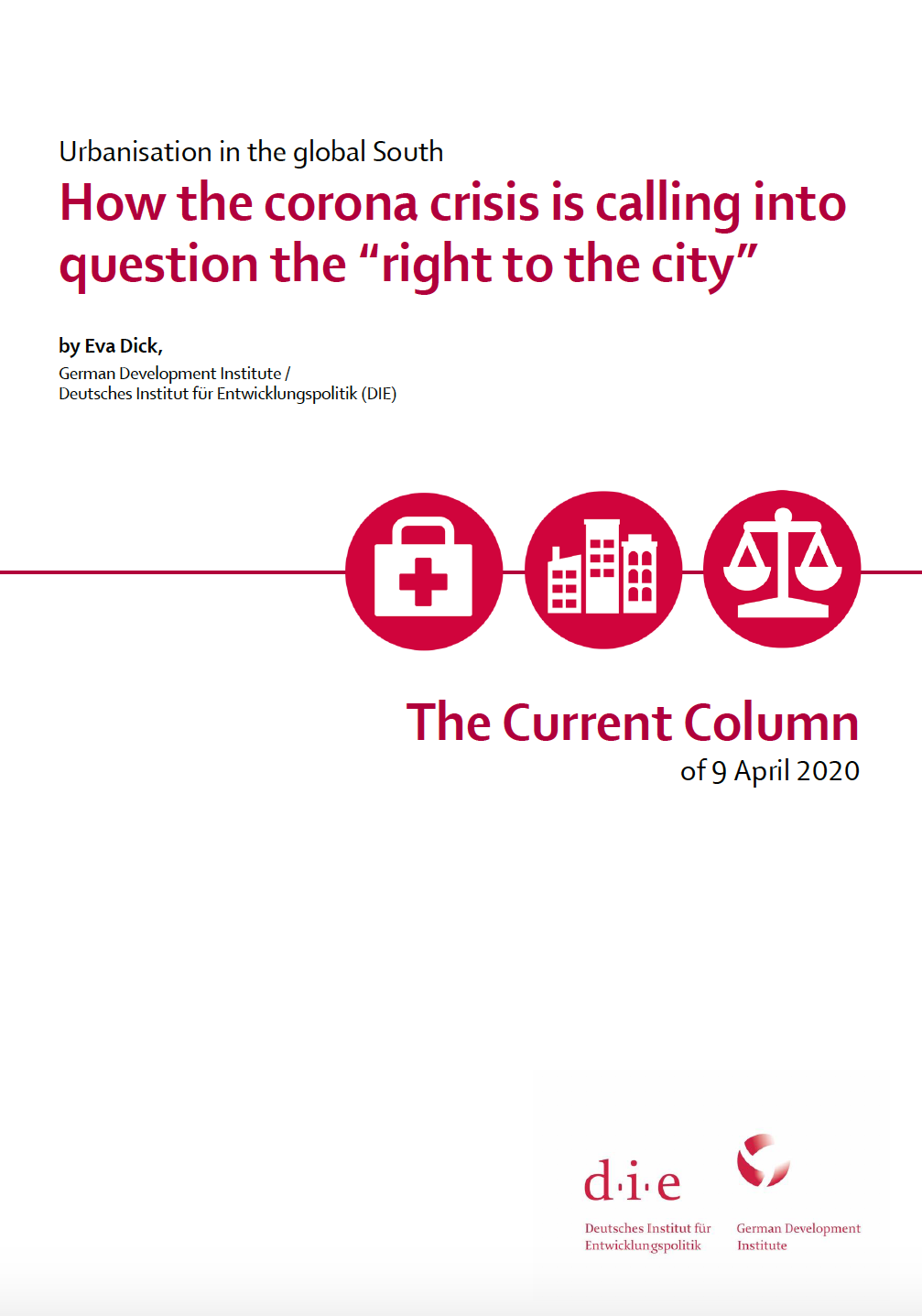 In late March, Indian Premier Narendra Modi imposed a three-week lockdown to prevent the further spread of the coronavirus. Since then, tens of thousands of migrant workers who had previously provided cheap labour in wealthy homes or on construction sites in the nation’s growing metropolises have been making their way back to their rural home regions. They have lost their jobs and, in many cases, accommodation, and the lack of financial and social security essentially leaves them with no other option but to return to their relatives in their villages. The situation of these migrant workers illustrates the increased vulnerability of disadvantaged urban population groups in the global South as a result of the corona crisis. The virus also serves as a magnifier of social inequality. Measures for short- and long-term crisis management and boosting resilience in the face of corona should thus be geared to urban needs and supported by the international community.

Repeated reference has been made in recent weeks, not least by our Institute, to the risks associated with the spread of COVID-19 in countries with fragmented health care provision, a lack of social security and a weak economy. Nonetheless, there has so far been insufficient consideration given to the urban dimension of the crisis. Protective measures such as quarantining, social distancing and more stringent hand and facial hygiene practices are also increasingly being introduced in countries of the global South. However, complying with these requirements is virtually impossible in densely-populated and marginalised urban areas, especially in slums and informal settlements, which are home to over one billion people worldwide and rising. In these neighbourhoods, people typically live in close proximity to one another and lack sufficient water and electricity supplies and sanitation. Additionally, there is uncertainty surrounding their tenure rights.

The virus can spread far more easily in slums and informal settlements, which account for 10 per cent of land in the Kenyan capital of Nairobi, for instance, but house 60 per cent of the city’s population. The complete shutdown of public life currently being considered by the Kenyan Government would hit Nairobi’s two million plus residents working in the informal sector particularly hard. Because they have no employment contract or social security, they are not entitled to compensation. Their living conditions and work situation virtually force them to contravene the protective regulations. Added to this is the fact that poor urban residents can barely afford medication or treatment in (a good) hospital. The situation is equally critical for the 100,000 or so refugees who, due to the government’s encampment policies, are residing unofficially in the city.

All around the world, the corona crisis is showing us the flip side of the urbanisation coin. Even in the countries of the global North, the promise of social and economic emancipation inherent to urban life is being curtailed for the time being. However, in the global South, this crisis is illustrating in a far clearer manner just how little the “right to the city”, formulated around half a century ago by French sociologist and philosopher Henri Lefebvre, has been implemented to date. The concept describes de jure or de facto secured access for the city population to produced and creative urban goods and spaces, to services and to knowledge. Such access did not exist prior to the corona situation, and now the pandemic is exacerbating urban vulnerability and inequality.

It is hardly a coincidence that delegations from a number of Latin American countries in particular campaigned to have this “right to the city” integrated into the list of goals in the final document during preparations for the third United Nations Conference on Housing and Sustainable Urban Development (Habitat III), held in Quito, Ecuador in 2016. Latin America is one of the world’s most urbanised regions. At the same time, many of its countries (and cities) are characterised by extreme social inequality.

While the corona crisis has exacerbated social vulnerability and inequality in cities and informal settlements, support measures must work at several levels, that is, beyond the local urban context. At settlement level, it is important that local (religious, migrant and youth) communities and their leaders help to promote rules of conduct to the public, increase their acceptance and enhance their dissemination. After all, confidence in state institutions and law enforcement agencies is often low among disadvantaged urban communities, such as India’s migrant workers, frequently resulting from past experiences of displacement in the name of city and neighbourhood renewal. Urban administrations and service providers should provide organisational, financial and technical support to community leaders. National institutions must gear short-term assistance measures and aid transfers, as well as systems for long-term crisis management, to the situation of poor urban populations, including groups with limited legal certainty.

The international community can make key contributions at all these levels through the provision of advisory services and financial support. In so doing, it would move considerably closer to achieving the vision of Habitat III (“cities for all” and the “right to the city”).

The German Development Institute, Deutsches Institut für Entwicklungspolitik, (DIE) is one of the leading think tanks for development policy worldwide.

The Institute is based in the UN-City of Bonn. DIE builds bridges between theory and practice and works within international research networks. The key to DIE’s success is its institutional independence, which is guaranteed by the Institute’s founding statute.