The Deforestation and Forest Degradation in the Amazon Biome map was produced by Imazon in order to contribute towards monitoring in the region. The methodology applied simultaneously generates mapping of deforestation and forest degradation [caused by logging activity and forest burning] using Landsat satellite images. Existing methods individually detect and map those processes, which can lead to overlaps in the results and increasing uncertainty in estimates of annual deforestation rates. That happens because in the most intense Landsat images forest degradation can be confused with deforestation. Deforestation is a process for converting forest to other land uses, such as pastures, agricultural areas, mining, or even for urbanization. To do that it is necessary to completely remove the original forest cover, while forest degradation partially and temporarily removes that cover. For example, timber harvesting involves the removal of a certain number of trees (3 to 5) per hectare and opening of roads and logging decks for storing timber; forest fires open clearings through burning trees, while other trees receive lower impacts. Those processes lead to the reduction of the original forest carbon stocks and of biodiversity. The methodology presented in this study makes it possible to map deforestation and forest degradation simultaneously, reducing possible zones of “confusion” in mapping those two types of processes. Another important contribution is the capacity for mapping deforestation in up to one hectare. We used Landsat images acquired during the period of 2000 to 2010, which annually cover most of the Amazon Biome, in order to produce the first results of this new monitoring system at Imazon. The data [from satellite images] are normalized in space and time and quantitatively analyzed, which makes it possible to establish automatic, generic and consistent classification rules. We also applied computing rules to detect possible classification inconsistencies over time and correct those problems. Finally, the maps generated with automatic classification are inspected and edited by analysts in order to correct eventual errors. Those mapping results are later used to estimate the annual rate for deforestation and degradation through mathematical methods, for the referenced date of August 1 [used officially by the Brazilian government for that purpose]. The sections below present details of the methodology, the mapping results and the next steps in this Imazon monitoring project.

Landsat TM/ETM+ satellite images were acquired from several sources. Those data and their metadata were structured into an image server to facilitate access and digital processing. Processing of satellite images for generating maps occurs in five stages (Figure 1).

Figure 1. Methodology applied in processing Landsat images and implemented in the ImgTools software. 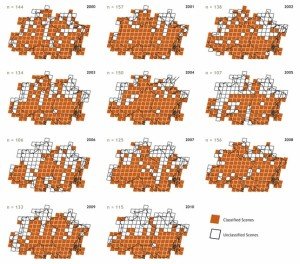 In order to automate the methodology described above, we developed a software called Tools, utilizing the IDL programming language (Figure 1) (Souza Jr. and Siqueira, 2013). This software automatically processes a set of scenes, producing maps and statistics (see example in Figure 4). 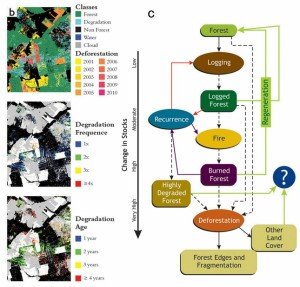 Table 1. Estimates of annual rates of deforestation (A) and forest degradation (B) obtained with Landsat images for the period of 2000 to 2010.

* It was not possible to estimate the annual rate due to the low number of observations with Landsat images during the period analyzed (only 27 out of 143 scenes with low cloud cover).

The States that most contributed towards the deforestation total for the period analyzed were Pará (35%) and Mato Grosso (31%), followed by Rondônia (16%) and Amazonas (10%) (Figure 5B). The State of Mato Grosso led in terms of forest degradation, contributing 48% of the total for that period. Pará was second in the forest degradation ranking with 32%, and Rondônia (7%) and Acre (5%) came next, with lower rankings (Figure 5C). The Prodes system detected a deforested area of 165,310 square kilometers in this area, in other words an area 2% smaller than the deforested area (169,074 square kilometers) detected by the Imazon system. The difference between the total deforestation detected by the two monitoring systems is very small, but it is greater between each year, with an absolute average of 2,270 square kilometers (Figure 5). Those differences may be explained through the following hypotheses: scale of monitoring, which is more detailed in the Imazon system; inclusion or not of forest degradation in monitoring; and by the different dates of the images, between the annualization methods (i.e., annual rate) of the measurements done by the satellite images. Nonetheless, the deforestation estimated with Prodes and with the Imazon system both presented a similar tendency of an increase in deforestation from 2001 to 2005, followed by a notable drop from 2006 to 2010. 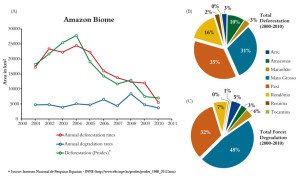 Figure 5. Annual rates of deforestation and forest degradation (A) in percent units contributions of the States of the Amazon Biome for these processes (B and C, respectively).

The annual rate is an estimate of the area of forest affected by deforestation or by forest degradation in a given year, generally expressed in absolute terms (square kilometers per year). Brazil uses the date of August 1 as the reference for estimating the annual deforestation rate. That means that the annual deforestation rate estimated for the period of August 1 to July 31, known as the reference period, which is also adopted in this study. The Landsat satellite images generally used for monitoring the Amazon are acquired on dates that do not coincide with the reference period used for estimating the annual rate. It is thus necessary to project the measurements made with satellite data for that period of reference by using mathematical methods. We adopted the method proposed by the Food Administration Organization (FAO) to estimate the annual deforestation rate in the Amazon (Table 1A). We first applied the method suggested by Puyravaund (2003) to calculate the annual percentage rate of forest cover lost.  The formula assumes that the area of forest lost to deforestation decreases over time according to an exponential rate, given by:

where At-1 and At-2 are the forest areas mapped in times t1 and t2, expressed in years, beginning with an initial year (t0= 2000). The result,r(t,t-1), represents the percentage rate of forest loss normalized for the period between t1 – t2(expressed in years). With the value of  it is possible to calculate the annual deforestation rate (in km2/year) for a given reference period, with the following equation:

where At-1 and At-2 are the forest areas mapped in times t1 and t2, expressed in years, beginning with an initial year (t0= 2000). The result,r(t,t-1), represents the percentage rate of forest loss normalized for the period between t1 – t2(expressed in years). With the value of  it is possible to calculate the annual deforestation rate (in km2/year) for a given reference period, with the following equation: For example, for t = 01/08/2001 and t – 1 = 01/08/2000  the annual deforestation rate in equation (2) is obtained by: 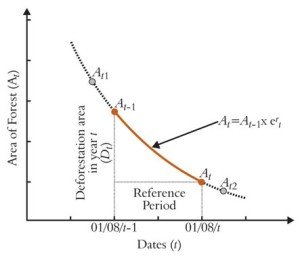 Figure 6. Example of the process for annualizing the deforestation rate using the method described in this section.

To calculate the annual rates for the States, we applied a mask, per scene, in order to apply that method only in the portions of a given State covered by the scene. For the cases in which there are gaps of one or more years in the Landsat images, we used the same estimate of  for all of the reference periods between the two images acquired. Finally, when deforestation is detected for previous years in areas not observed because of cloud cover, those areas are distributed equally throughout the period in which clouds occurred. For example, if the deforested area A [in km2] occurs in 2003 and that area was under clouds during 2002 and 2001, we assume that A/3 happened equally in those years.

The same methodology described above was applied for estimating the annual rate of forest degradation (Table 1B), discounting the annualized deforestation for each period of reference to obtain the area of remaining forest in the respective year.

We would like to thank the Fundo Vale for support in developing the methodology for monitoring with Landsat images, image process activities and publication of this map. The ImgTools software had developmental support from the Moore Foundation, Climate Land Use Alliance and Fundo Vale. The Gordon & Betty Moore Foundation supported the satellite image processing team in monitoring forest degradation and deforestation in protected areas of the Amazon. That project also received support from NASA through the Biological Diversity Program led by Dr. Mark Cochrane of South Dakota State University (Contract: NNX07AF16G) for operation activities in pre-processing and classifying images. Doctors Izaya Numata and Christopher Barber, of the University of South Dakota, supplied valuable suggestions and revisions of the processed images. We would like to thank them for those contributions.

The project received technical cooperation from: André Monteiro, Antônio Fonseca, Dalton Cardoso, Denis Conrado da Cruz, Luis Oliveira Jr., Marcelo Justino, Roberto Wagner Batista, Sâmia Nunes and Sanae Hayashi. We would also like to thank Cíntia Balieiro, who was a member of the processing team during the initial phase of this project.

This indicator is currently classified as Tier I. The Food and Agriculture Organization of the United Nations (FAO) is the Custodian agency for this indicator.

Unit of measure: Forest area of total land area (in %)

SDGi
Proportion of land that is degraded over total land area