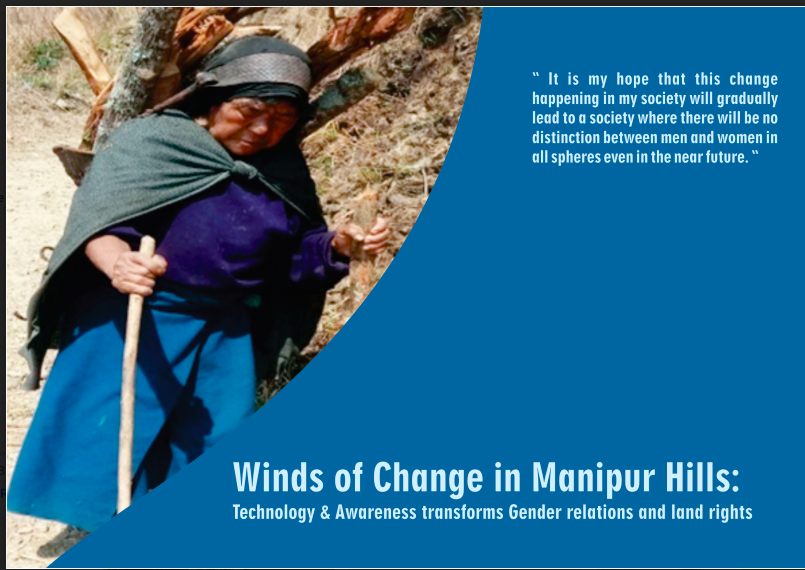 The present Ziumi which I live is like any typical village built on a lovely meadow situatedabout 75 KMs from NH39 and 102 KMs from District Headquarter Senapati. The village is about 727 meters above sea level, with 71 HHs and a population of about 426 approximately as according to the information collected during the PRA exercise in the year 2017 by Rongmei Baptist Association, Nagaland under EED/ BROT project. The great ancestors of Ziumi were with the ancestors of the Zeliangrong in all through their migrations down the ancient days from the South East Asia, and then migrated to Makhel to join with the rest of the Naga families. Their movement continued until they finally reached Makuilungdi which is considered the cradle of the Zeliangrong Cultures and Customs. “The people of Makuilungdi were seldom sick but deaths were not common. Families increased in numbers...They built houses and village on permanent basis... They developed their code of rituals and worship” It is said that population continued to increase and the number of houses reached the mark 7777, this led to the problem for cultivation and paved the way for dispersion of the Zeliangrong peoples into different directions. The ancestors of Ziumi were in the group which settled at Nnuiret, then to Punggwang which is some 3 KMs away from the present village, Ziumi. For many generations our ancestors lived a prosperous life at Punggwang with their HH reaching to 300. Further, in pursuit for better livelihood and brighter endeavour some of the villagers continued dispersion until they settled down to the present location at Ziumi village.

Economically they depend on their labour and resources; their watch word is “tiu de tiu nie, tyiu de tyiu nie” meaning to say “will work and will eat”. Thus they were self-dependent and hard working people who produced for their living. The people are hospitable and kind to others. The village is like a business centre for the neighbouring villages, where exchange of livestock was done in both barter system and currency.

Social, political & Religion: Like in any other Naga tribe the Zeliangrong community is governed by the land lord who is actually the founder of the village. But there will be some cases where the land lord acts as merely a nominal head whereby giving all authorities powers to the village governing authority called the “Village Authority or Village Council”. This body of council works in a democratic principle. Socially the community is often divided into Clans. The village land is comprised of private land, community land and clan land. There are three major clans namely,

Beside these three clans, Ziumi village had King (Hengwang) or headman from the clansmen of Nking chame, and there are to two GBs one each from Hoi clansmen and Hau clansmen. These peoples and the elderly peoples from each clan looked after the social and political life of the village for harmonious living.

Religiously, the Ziumi village has two faiths; Heraka which is a traditional religion and Christianity which came later through conversion; the latter has two denominations viz, Baptist and Catholic.

Land has always been an important component of development especially for people in rural areas. The major land use pattern in Ziumi village may be categorised as settlement, agriculture, forest and scrub.

Settlement land covers areas under residential, educational, administrative, recreational, open spaces, places of worship, granaries, and „Duikhunram‟ (area of pool). Agriculture land occupies large area and is divided into jhum land which is a shifting cultivation area and settled or permanent agriculture which is under Wet terrace fields. Forest land occupies the largest area of the village land which is the preserved forest for maintaining the ecology.

Generally, in Zeliangrong community land transfer is restricted unless it is inherited from the forefathers except all the Terrace or Wet Paddy fields developed and owned by every individual. Only this land is permissible for selling. The rest of the village lands belonged either to the clan or the community.

In general the property rights are vested only for the male members of the Zeliangrong community. Women are denied from inheritance policy in that the female members change the clanship title to her husband on the day of their marriage. In times of death or divorce cases, women are generally left to decide whether she is to live alone with her children or return to her paternal homes. If a woman returns homes, she is given protection, shelters and lands either by her parents and relatives but have no rights over the land other than for temporary cultivation. A widow living with her children continues to enjoy the benefits in as much as the husband would be enjoying. Without any male child she is generally deprived of these rights.  Such is the affair of women status in our Zeliangrong community.

To give better status for the women of our village, the Rongmei Baptist Association had several discussions and meeting with the village elders and intellectuals of the village. The outcome of the discussion was that women shall be given rights over the land she cultivates. Thus, GPS mapping of lands on Homestead land, Horticulture, Jhum fileds, Terrace fields etc., were done accordingly during the EED/BROT project intervention. The objective of mapping is to provide Certificate of land holding for individual especially women of the village which should also be duly counter signed by the Village Authority. Hence, by now at least 24% of women in my village, Ziumi will be having Land Certificate. This will provide security of livelihood for women and also they will be able to access Bank loans and other developmental activities. It will also provide clear demarcation of boundaries between two parties which will minimise conflict of land between same community and neighbouring village.  During project intervention it is found that no women of the village were under SHG. So, formation of SHG has become one primary task of the Organisation. After formation of SHG several programs were introduced mainly based on Livelihood, Natural Resource Management and other Capacity Building programs. On receiving these programs, our village authorities were of the opinion to give more space on land for women to carry out Income Generating Activities (IGA) as the project activity focus mainly on Land base activity. At this time one may find in my village that women are utilizing lands for cultivation more than the men society do. Every now and then women and girls performances in work and education have shown brighter. This is because our society has given equal importance in gender issue although not very long ago. Gone are the days where men only rule our Zeliangrong society. Now women also ruled... the first Zeliangrong woman to be appointed Village Chairman was Mrs. Dithuanliu Kamei of Machiang village under Tamenglong district, Manipur.

There is a tremendous emancipation of women rights with respect to restriction of Transfer of property rights. The work of Rongmei Baptist Association with the support from EED/BROT project has brought about wind of change to our community. It is my hope that this change happening in my society will gradually lead to a society where there will be no distinction between men and women in all spheres even in the near future.