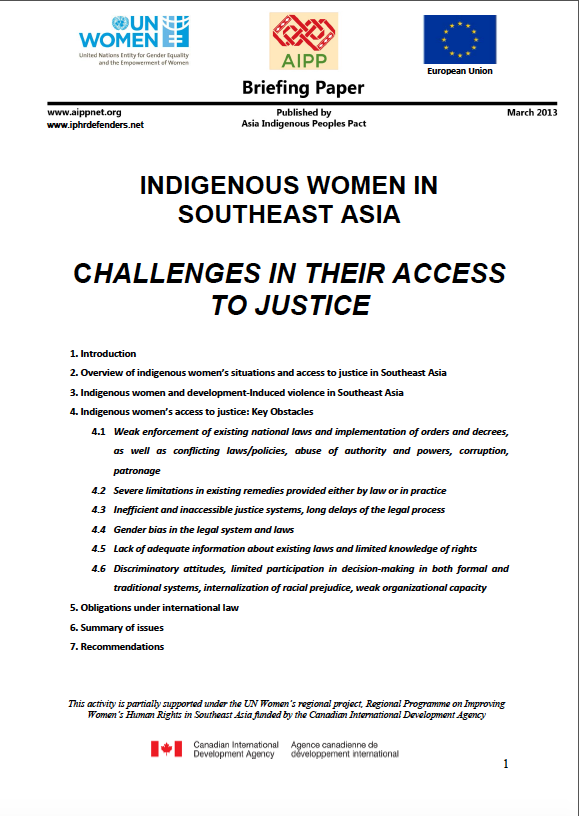 This briefing paper is prepared as part of the advocacy of the Asia Indigenous Peoples Pact (AIPP) for the respect, protection and recognition of the human rights of indigenous women. In this paper, we focus on access to justice for indigenous women in Southeast Asia facing development-induced violence. We draw on the results of the Southeast Asia Regional Consultation on Development, Access to Justice and the Human Rights of Indigenous Women, held on October 30 – November 02, 2012 in Chiang Mai, Thailand that the Asia Indigenous Peoples Pact (AIPP) convened in collaboration with the UN WOMEN Regional Office of Asia and Pacific. Focus of the cases and testimonies were on state and corporate development projects and their impact on the human rights of indigenous women. These projects included dams, mines, plantations, national parks and the like. The major issue that arose was the denial of the right of these indigenous peoples to determine their own path to political, social, economic and cultural development. This is patently seen in the lack of efforts to undertake meaningful and substantive consultation with them and obtain their free prior and informed consent on all projects and activities that are implemented in their communities. The lack of or limited access they have to seek justice remedies on violations arising from development projects are exacerbated by their non-recognition as rights-holder with collective rights. The imposition of development projects into indigenous territories has been called by indigenous peoples as development aggression.

The consultation was attended by twenty-nine indigenous women, as experts and rights-holders. There were joined by human rights experts from the UN Expert Mechanism on the Rights of Indigenous Peoples (EMRIP), the UN WOMEN, the ASEAN Commission on the Promotion and Protection of the Rights of Women and Children (ACWC), the Southeast Asia National Human Rights Institution Forum (SEANF), the National Commission on Violence Against Women of Indonesia (KOMNAS Perempuan), the National Human Rights Commission of Thailand, the Asia Pacific Forum for Women, Law and Development (APWLD), and Indigenous Peoples’ International Centre for Policy Research and Education (Tebtebba).

Five case studies on the impacts of dams, plantations, mines, economic land concessions and national parks from Cambodia, Laos, Malaysia, Thailand, and the Philippines were presented. Additional testimonies were heard from Indonesia (plantation and mines), Malaysia (plantation), Myanmar (dams, plantations, gas-oil pipeline), the Philippines (mines), Thailand (parks), and Vietnam (road construction and dam). The participants came out with action points that are included in the recommendations in this paper.

In doing so, UN Member States took an historic step in accelerating the Organization’s goals on gender equality and the empowerment of women.