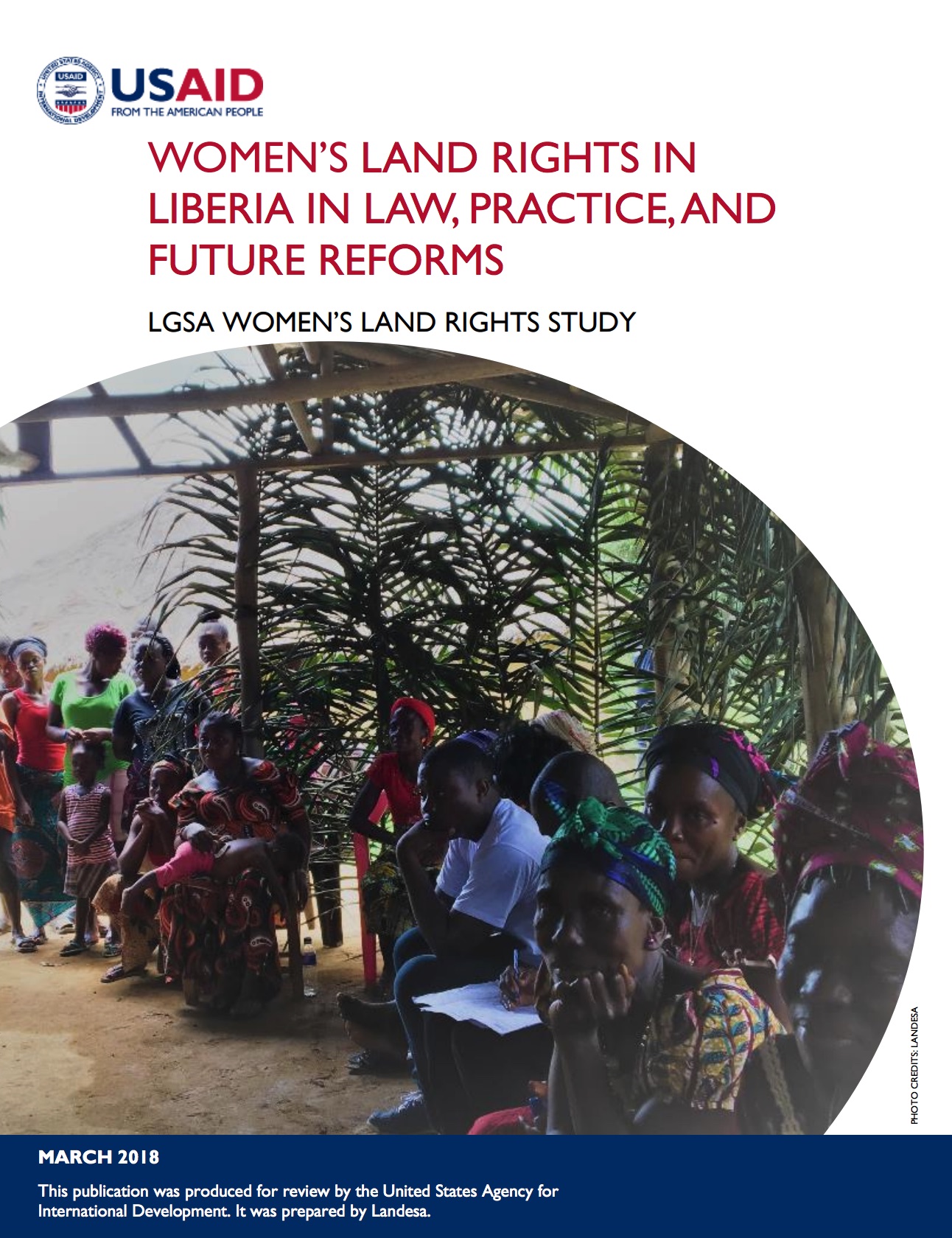 Land is the most important asset for many rural Liberian women and men, and is often a family’s primary source of cash income, food and nutritional security, health care, and education. Though women play a central role in agricultural production in Liberia, women’s rights and access to land are often not equal to those of men due to biases in the formal legal framework and customary law.

Liberia’s 2013 Land Rights Policy (LRP) calls for far-reaching reforms in land tenure relationships, including transferring ownership of public land to the customary communities that have traditionally occupied and used it. The LRP also calls for the conversion of some land within customary areas to private, fee simple ownership, establishing for each resident of a customary community the right to up to one acre of land in private ownership. Implementation of these and other changes indicated by the LRP will fundamentally alter rural land tenure in Liberia.

When designing and implementing land reforms, it is critical to consider whether such reforms will formalize existing inequities. In Liberia, individual land tenure security in rural areas depends, in part, on whether a person is male or female. Within customary communities, land passes through clan-based male lineages, and men largely control the decision-making, allocation, management, use, and inheritance of land. Daughters generally do not inherit rights to customary lands on par with men, and wives’ inheritance of land occupancy and use rights is often contingent on their willingness to remain a part of their deceased husband’s family by marrying a brother or other relative. In the event of separation, divorce, or death of her husband, women may be left with no rights to the land in their marital community where they have used, depended upon, and improved land during their marriage. Women in de facto unions, which may constitute most marriage arrangements in Liberia, experience even less security vis-à-vis the land they share with their partners. Land reforms must ensure that gender inequities are not perpetuated, and that women’s land rights are strengthened and upheld. The first step toward this is to understand existing gendered norms and practices regarding land in rural Liberia.

The purpose of USAID’s Land Governance Support Activity (LGSA) is to assist the Government of Liberia in implementing the LRP. Landesa’s role in the project is twofold: to help provide and mainstream a gender-responsive lens across all project components, and to provide technical assistance on legal and policy development where requested by the government. Over two years, Landesa met with land sector stakeholders from Liberian government agencies, civil society, and academia. As a result of these meetings, Landesa noticed demand for a consolidated resource summarizing women’s rights to land in Liberia and grounded in legal analysis, desk research, and community-based research.

This report provides a foundation for understanding women’s land rights in Liberia. The report builds on a Women’s Land Rights study produced under USAID’s Land Policy and Institutional Support (LPIS) project in 2013, incorporating findings from field research conducted jointly by Landesa, LGSA, AFELL (Association of Female Lawyers of Liberia), and WONGOSOL (Women’s Non-Government Organization Secretariat of Liberia) in April/May 2017. It also incorporates new research on the family and civil laws that affect women’s land rights, analysis of the constitutional case law that forms an important part of Liberia’s jurisprudence on women’s rights to land, and prior research on women’s land rights, primarily conducted under USAID’s Liberian land projects.

Landesa partners with governments and local organizations to ensure that the world’s poorest families have secure rights over the land they till. Founded as the Rural Development Institute, Landesa has helped more than 105 million poor families gain legal control over their land since 1967. When families have secure rights to land, they can invest in their land to sustainably increase their harvests and reap the benefits—improved nutrition, health, and education—for generations.

Landesa partners with governments and local organizations to ensure that the world’s poorest families have secure rights over the land they till. Founded as the Rural Development Institute, Landesa has helped more than 105 million poor families gain legal control over their land since 1967. When families have secure rights to land, they can invest in their land to sustainably increase their harvests and reap the benefits—improved nutrition, health, and education—for generations.