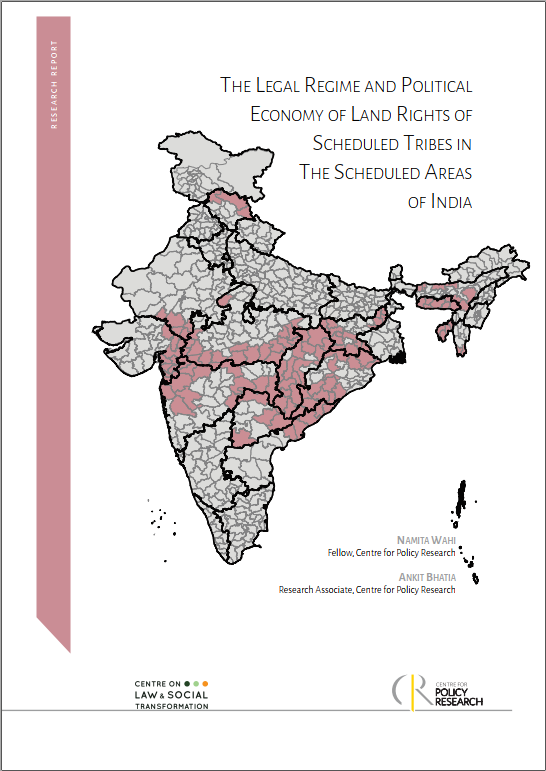 This Report is the outcome of a deep commitment on part of the Land Rights Initiative research team to create systematic knowledge on land issues in India with a view to meaningfully evaluating legal and policy initiatives that can contribute to creation of more equitable land regimes for all. The Report has been in the making for five years and yet remains a work in progress. The dismal plight of the Scheduled Tribes in India is the result of complex current and historical, institutional,social, political, and economic dynamics that have been difficult for us to assess in their totality. This Report is but a modest attempt to shed some light on the question: why despite the existence of constitutional protections safeguarding the rights of STs to land, the only group to enjoy this protection, they continue to be the most vulnerable and impoverished of all groups in India?My first words of gratitude go to Siri Gloppen, Professor of Comparative Politics, University of Bergen, Pratap Bhanu Mehta,Vice Chancellor, Ashoka University and former President, CPR, Duncan Kennedy, Emeritus Professor, Harvard University,Professor Joseph Singer, Bussey Professor of Law, Harvard Law School, Partha Mukhopadhyay, Senior Fellow, CPR, and Ravi Rebbapragada, Founder and Executive Director, Samata, for believing in the project and helping conceptualise and execute it over the past five years.Many serendipitous encounters and stimulating conversations provided the intellectual and material conditions to make this study possible. I am grateful to Dr. V.N.V.K. Sastry, Mr. Ambrish Mehta, Mr. Suneel Kumar, Mr. Ashok Shrimali, Mr.Achyut Yagnik, Prof. Pavan Mamidi and Prof. Ashish Nanda, for helping us enormously in designing our field research in the states of Andhra Pradesh, Gujarat, and Telangana. Conversations with Mr. Chinaveerabhadrudu, from the Andhra Pradesh Department of Tribal Welfare, Mr. Yadagiri, from the Telangana Department of Tribal Welfare, Justice Ramalingeshwara Rao, Ms. Nupur, Dr. Sivaramakrishna and Ms. P. Sarada Devi, Prof. Kalpana Kannabiran, Mr. Anand Yagnik, Ms. Paulomee Mistry, Prof. Walter Fernandes, and Ms. Patricia Mukhim greatly enhanced our understanding of the tribal issues in both Fifth and Sixth Schedule areas. I am grateful to the Norwegian Research Council for providing the material resources for this study as part of the research project on “Land Rights, Environmental Protection, and Inclusive Development within India’s Federal Political System”. This research project is part of a series of ongoing research collaborations between CPR and the Centre on Law and Social Transformation (LawTransform) at the Chr. Michelsen Institute (CMI) in Norway. I also want to thank Johan Loov and Baard Hjelde at the Norwegian Embassy for their support of the project.
The research team grew organically over a period of five years. I am deeply grateful to the research associates and research interns whose tremendous individual contributions and team work have made this project a reality. I also want to thank Pragya Akhilesh, Revathy Krishnan, and Nikita Garg for useful research support to the project. Conferences and workshops held at the Centre for Policy Research (2014, 2017), Harvard University (2014), and LawTransform in Bergen (2013, 2015, 2016, 2017), provided valuable feedback and enabled stimulating conversations that helped us unpack the complexities of our narrative. Critical inputs from the CPR community, including doyens like late Mr. B.G. Verghese, late Mr. Ajit Mozoomdar, and Mr. Ved Marwah, and colleagues especially Neelanjan Sircar, Shyam Babu, and Kanchi Kohli helped us greatly in analysing and interpreting our data. The creation of maps in our report would not have been possible without the help of Shamindra Nath Roy and Kanhu Charan Pradhan. I am deeply grateful to all of them. Last, but not the least, I am grateful to the communications team at CPR, including Bipin Nayak and Neha Gour who helped design and layout the report.

The Centre for Policy Research (CPR) has been one of India’s leading public policy think tanks since 1973. The Centre is a non-profit, non-partisan independent institution dedicated to conducting research that contributes to the production of high quality scholarship, better policies, and a more robust public discourse about the structures and processes that shape life in India.