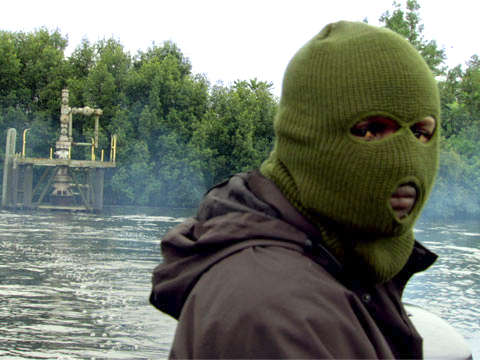 In Big Men, director Rachel Boynton has achieved a tour-de-force of documentary filmmaking. Taking a large, complex and much-contested phenomenon -- the oil business as it is conducted in under-developed countries such as Ghana and Nigeria -- she has crafted an edge-of-your-seat, character-driven drama that is also a clear and enlightening film about the global dealings behind petroleum, a crucial resource that touches everyone's life.

Filming over five years, often accompanied solely by her cameraman, Boynton talked not only to the executives of Kosmos Energy, the small Dallas startup that developed Ghana's first commercial oil field, but also to the Deadly Underdogs, a Nigerian militant group looking to profit from the oil in any way possible -- whether legal or not. In addition, she talked to everybody in-between and beyond -- venture capitalists, government ministers, local businessmen, environmental and human rights activists and the men and women on the village street. The result is an inside account of today's oil business, complete with political intrigue, corruption and a fascinating cavalcade of players.

It all begins in 2007, when Kosmos discovered commercial oil in the West African Republic of Ghana for the first time in the country's history. The massive offshore oil field was christened Jubilee Field, and its potential to produce wealth dazzled everyone, from New York investors to Ghanaian politicians and citizens. Kosmos had multiple partners in Jubilee, including local businessman George Owusu's EO Group. Kosmos then made deals with major venture capital firms to start the oil flowing in two years, and projected a $2.2 billion return for investors.

Kosmos' team gives Boynton unprecedented access to the meetings and deal making behind the scenes. The candid discussions of C.E.O. Jim Musselman, C.O.O. Brian Maxted and General Counsel Bill Hayes reveal a sharp focus on investor risk and return. But what about the other risks -- environmental, social and economic -- faced by Ghanaians?

The first discordant note comes at a national forum in Accra, Ghana's capital, designed to discuss the distribution of projected income from Jubilee. Erik Solheim, minister of the environment and international development for Norway, one of the world's major oil producers, urges implementation of his country's socialist model -- to tax foreign oil companies to within "a pence" of their leaving. It isn't a formula that will work for a capitalist organization like Kosmos. Stephen Abankwa, chairman of the Ghana National Petroleum Corporation (GNPC) board of directors, assures Musselman that Kosmos' original, lucrative deal will remain in place.

The term "resource curse" comes up at the conference and recurs in Big Men. It refers to the exploitation of a poor country's resources for the benefit of foreign investors, in league with local politicians, to the exclusion of the local population. Ghanaians have historical experience of that curse: 200 years of gold mining have never brought the country more than 5 percent of all the wealth created. A more pointed example can be found just down the coast. Nigeria is the poster child for oil-cursed African nations. Between 1960 and 1999 alone, an estimated $440 billion-plus was siphoned off or wasted by corrupt Nigerian politicians. And Nigeria's people have found their lives worsened by environmental degradation and mounting sectarian strife and lawlessness.

As Boynton arrives in the Niger Delta, crime and corruption are fueling a threat to Nigeria's reliability as a major oil producer. Local militants are sabotaging oil installations and demanding more money for their region. Illegal "oil bunkering," or oil theft, has accelerated the conflict and provided rebel and criminal groups with funds to purchase arms.

As a young man in a Niger Delta village who cut and burned an oil pipeline, harming his own neighbors, says, "We're all born believing in our own self-interest. Even if it causes harm to another person, that doesn't matter. You fight for our own self-interest...That's what's happening here."

Meanwhile, back in Ghana, the years following the discovery of oil at Jubilee turn into a white-knuckled roller-coaster ride for Kosmos. The 2008 financial crisis; wild fluctuations in the price of oil; growing criticism of the "sweet deal" between Kosmos and the GNPC; a new government demanding a new deal; and legal challenges all squeeze the potential profit margin and worry Kosmos' backers. When the company makes its IPO debut on the New York Stock Exchange, fortunes shift and lives are forever changed. And, as in every good suspense story, all is not what it first seems.

"The world of international oil deals is not an easy one to enter with a camera," says director Rachel Boynton. "And I knew no one in the oil business -- or in Africa -- when I began this film. As I tried to figure out how to enter all these worlds, I began with the premise that everybody was connected -- that it was only a matter of degrees of separation.

"Ultimately, Big Men is a movie about that world and about the system in which we all live. Personal profit is the great motivator. We all want to become bigger than we are, to make more money and to achieve greater renown. And everyone is concerned with looking after his own people -- his own family, friends, tribe, company, shareholders. The major difference is in who each of us considers 'his own' to be.

"For me, the safeguard against divisive self-interest lies not in denying that we're all looking out for ourselves, but in recognizing and valuing what connects us. What does this very basic motivation -- the pursuit of profit -- do to the way we all behave? And when maximum individual profit is the ultimate good, isn't it inevitable that a very few will have more while a great many will have infinitely and tragically less?"