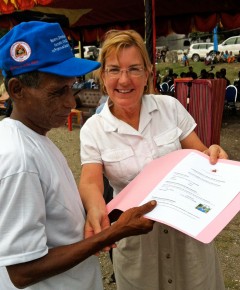 A nation formed just 10 years ago, Timor-Leste struggles to overcome complex challenges of land ownership and use rights that were created under Portuguese and Indonesian rule. Competing land claims between individuals, and between individuals and the state, are quite common and occasionally result in armed conflict and deaths. Complicating the problem is the absence of a property rights legal framework in which to address land matters. Many hope that a new land law that will be introduced to Parliament at the beginning of 2013 will help address many of the ambiguities currently present in the land and property sector.

This month, experts from USAID’s Land Tenure and Property Rights Division in Washington are in Timor-Leste to help advance work in the land and property sector. Their work builds upon nine years of engagement in the land sector by the U.S. Embassy and USAID Mission in Dili.

“Establishing a clear, predictable land tenure system is essential for Timor-Leste’s development as it will provide a means to resolve disputes without violence and set a sturdy foundation for economic growth,” explained U.S. Ambassador to Timor-Leste, Judith Fergin.

USAID is currently assisting the Government of Timor-Leste as it develops provisions in the draft land law that promote and clarify the property rights of communities and individuals. Meetings with government officials and members of Parliament revealed solid commitments to promote ownership rights and fairness. Once a land law is in place, residents will finally be able to obtain legal security of land holdings or use the legal framework to contest competing claims and settle disputes. Parliamentary and government leaders have said that passage of the land law is a top priority in 2013.

In anticipation of a national land law, USAID began a project in 2007 that strengthened the country’s cadastral and land registration systems. The project, branded Ita Nia Rai, which in Tetum means “Our Land,” also increased people’s understanding of their rights and responsibilities through public information awareness activities. The project registered more than 50,000 claims to urban land in all 13 districts across the country. After the claims were recorded, communities were given the opportunity to confirm or contest the claims in the area. Uncontested claims to property are eligible for property claims certificates from the government. According to the most recent version of the Land Law before Parliament, certificates issued by the government under the project will mature into a full title after five years. Certificates already issued have reduced conflict, promoted investment and strengthened governance. The transparent process has established a rich database that will form the basis of a national property cadaster.

When the project ended in September 2012, the Ministry of Justice, through the National Directorate of Land, Property and Cadastral Services, requested the transfer of ownership for Ita Nia Rai and is working to integrate the community-driven process into its business operations. The directorate, recognizing the benefits to Timorese, plans to expand the claims registration process to other high priority areas throughout the country in the coming years.