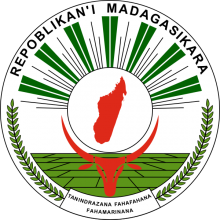 Madagascar was one of the last major landmasses on earth to be colonized by humans. The earliest settlers from present-day Indonesia arrived between A.D. 350 and 550. The island attracted Arab and Persian traders as early as the 7th century, and migrants from Africa arrived around A.D. 1000. Madagascar was a pirate stronghold during the late 17th and early 18th centuries, and served as a slave trading center into the 19th century. From the 16th to the late 19th century, a native Merina Kingdom dominated much of Madagascar. The island was conquered by the French in 1896 who made it a colony; independence was regained in 1960. During 1992-93, free presidential and National Assembly elections were held ending 17 years of single-party rule. In 1997, in the second presidential race, Didier RATSIRAKA, the leader during the 1970s and 1980s, was returned to the presidency. The 2001 presidential election was contested between the followers of Didier RATSIRAKA and Marc RAVALOMANANA, nearly causing secession of half of the country. In April 2002, the High Constitutional Court announced RAVALOMANANA the winner. RAVALOMANANA won a second term in 2006 but, following protests in 2009, handed over power to the military, which then conferred the presidency on the mayor of Antananarivo, Andry RAJOELINA, in what amounted to a coup d'etat. Following a lengthy mediation process led by the Southern African Development Community, Madagascar held UN-supported presidential and parliamentary elections in 2013. Former de facto finance minister Hery RAJAONARIMAMPIANINA won a runoff election in December 2013 and was inaugurated in January 2014.

Madagascar is a semi-presidential republic.

The President of the Highest Transitional Authority declared the constitution in effect following the approval of 74.19% of voters in a referendum.