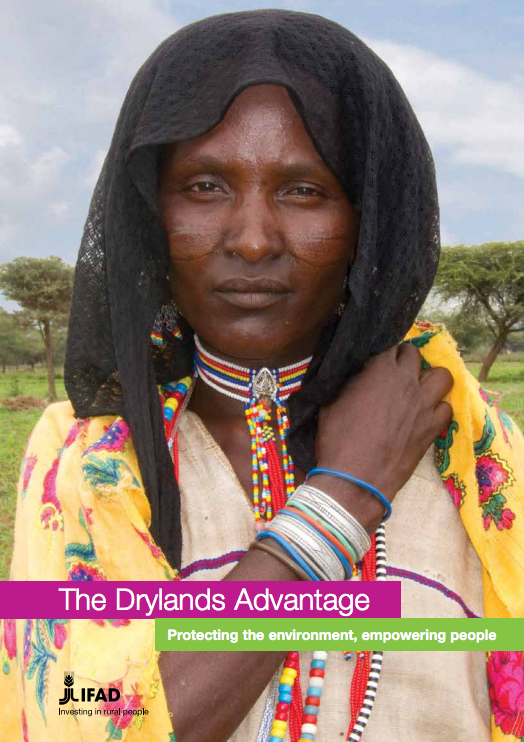 “Drylands are absolutely key to global food security for the whole planet,” said IFAD President, Kanayo F. Nwanze. "Environment friendly and water efficient agriculture for smallholders is key to reducing poverty, boosting smallholder adaptation to climate change and rehabilitating degraded lands. We look to empower more rural farmers to sustainably manage their land, so that while they feed their families for generations to come, they can also get out of poverty.”

Present in each continent and covering over 40 per cent of the earth, drylands generally refer to arid, semi-arid and dry sub-humid areas, and are home to more than 2 billion people. Drylands also hold up to 44 per cent of the world’s cultivated agricultural systems.

The report, The Drylands Advantage: Protecting the environment, empowering people, shows how drylands support important ecosystems and a great variety of biodiversity, as well as their vital role in the livelihoods and cultural identity of many smallholders.

For example, in Swaziland, IFAD has supported communities to rehabilitate gullied land and introduce sustainable land management practices on 68,000 hectares of land, which can now generate livelihoods for people. In China’s Yanchi county, where drylands are turning to desert, farmers have increased their incomes by 20 per cent as a result of a comprehensive programme to generate alternative and sustainable livelihoods. Without this programme, desertification would likely worsen and the drylands would no longer be farmed at all.

IFAD-supported projects are helping smallholders thrive in drylands, as well as contribute to the UN’s Sustainable Development Goals under the 2030 Agenda to “protect, restore and promote sustainable use of terrestrial ecosystems, sustainably manage forests, combat desertification, and halt and reverse land degradation and halt biodiversity loss.”

“Despite their importance, drylands are being degraded with enormous economic consequences,” said the Director of IFAD’s Environment and Climate Division, Margarita Astralaga.  “Desertification of drylands could lead to some 50 million people being displaced within the next 10 years.”

She added, “By investing in drylands, IFAD is seeing significant human and environmental dividends. Environment-friendly and water-efficient agriculture for smallholders is key to reducing poverty, boosting smallholder adaptation to climate change, as well as rehabilitating degraded lands.”

The International Fund for Agricultural Development (IFAD), a specialized agency of the United Nations, was established as an international financial institution in 1977 as one of the major outcomes of the 1974 World Food Conference. The Conference was organized in response to the food crises of the early 1970s that primarily affected the Sahelian countries of Africa.