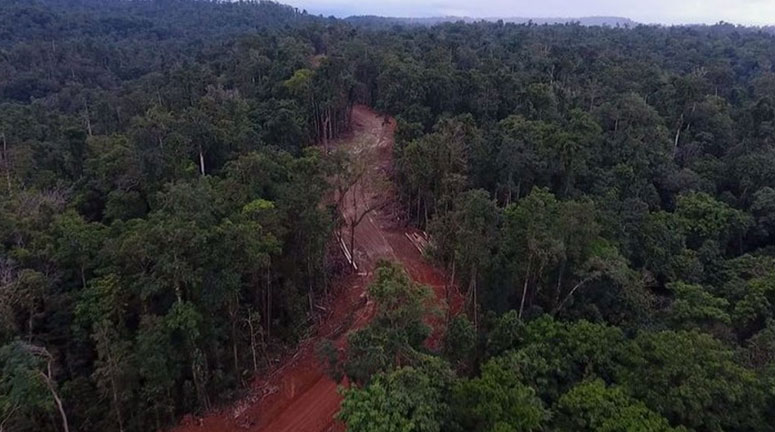 On July 21, 2011 the then Acting Prime Minister Sam Abal announced the establishment of a Commission of Inquiry to investigate 77 land leases which were issued under the Somare government’s Special Agriculture & Business Leases (SABL). The inquiry, which was later extended by Prime Minister Peter O’Neill in October 2011 for a further five months, discovered that over 90 percent of the leases totalling over 5 million hectares were illegally obtained from traditional landowners (Zealand, 2015).

The inquiry recommended that the leases be cancelled and the land returned to the landowners. But to date the National Government is yet to make progress on this policy decision. In September 2016 National Research Institute (NRI) director Dr. Charles Yala described the SABL as a system that promoted land grabbing (Mou, 2016). In March 2017 the Lands and Physical Planning Minister Benny Allen was criticized in an NRI blog, which accused him of releasing misleading statements on the findings and recommendations of the commission of inquiry (Yapumi, 2017).

In March 2017 Mr O’Neill confirmed that all SABL licenses were cancelled in a 2014 National Executive Council (NEC) decision, and asked the querying journalist to check with the Department of Lands and Physical Planning, to ascertain why investors still had their licenses (Orere, 2017). In April 2017 Mr Allen announced in a ministerial statement that the National Government has revoked all SABL titles and will now work with customary landowners to transfer them under a new voluntary customary land registration system (Patjole, 2017).

Two years after the NEC decided to revoke and cancel all SABL licenses in 2014 there is still no progress on this particular issue. There also appears to be a disconnect between the Office of the PM and the minister, in the face of public concern and criticism. If the PM had publicly assured the public of the cancellation of all SABL licenses then it is time to deal with the cabinet minister who continues to defy prime ministerial directives.

The Special Agricultural Business Lease (SABL) is a controversial theme that has been the concern of most Papua New Guineans since its inception. Customary land in PNG accounts for more than 90% of the total land mass within the country. Since customary land cannot be sold, the only way an external party could have access to the land for the purposes of development was through a specialised agricultural business leases.

A SABL is a temporary acquisition of customary land for a fixed period of time for the purpose of establishing a plantation or other agricultural business. This was made possible through an amendment to the Forestry Act 1991. The amendment facilitated a massive and debilitating land and timber grab, primarily due to rampant corruption and the weak rule of law, coupled with the unyielding pursuit of timber by logging companies.

The controversial business leases granted to foreign companies has increased the impetus of illegal logging in PNG. Where trees are cut under the guise of clearing the forests for purposes of the SABL, soon after which, they are shipped off illegally. This is increasingly becoming common in Papua New Guinea, with lesser repercussions by the law.

Investigations into the controversy surrounding SABL would necessitate the involvement of an independent investigative body. Unfortunately, independent watchdogs like the Ombudsman Commission and the Public Accounts Committee are under resourced and suffer political interference. That was why a Commission of Inquiry was set up to investigate the different cases of SABL within PNG in 2011. The Prime Minister (O’Neil) has promised an independent commission against corruption to deal with this matter but no meaningful progress has been made to establish such a body.

A recent report was published by UK based charity War on Want and ACT NOW! The reports highlight various instances of human rights abuse and violation brought about to local communities affected by the SABL. The report highlights that the Royal PNG Constabulary have frequently been found protecting the interests of powerful SABL actors using brute force and intimidation to suppress resistance by customary landowners.

In seeking to address the problem, despite the findings of the Commission of Inquiry – that there were widespread abuse, fraud and a lack of coordination between government agencies, along with government officials to ensure compliance.[1] John Numapo, an investigator within the COI concluded that:

“The overall recommendation of the COI is that the current SABL set up is a complete failure and must be abolished. The current set up is riddled with loopholes, shortfalls and inadequacies – so much so that corrupt public officials and unscrupulous individuals are taking advantage of it to enrich themselves. There is simply no transparency and accountability in the whole process, starting from application to processing to the final issuing of SABLs.”

The PM instated a ministerial committee to facilitate the nullifying of the SABL cases deemed illegal; but this committee comprised of members of parliament who were previously involved with the introduction of SABL into PNG. The ministerial committee’s report which was said to be submitted to the PM was already crippled from the start.

The current concern of this issue is the effectuation of the admonition of the SABL as expressed by the Prime Minister and the NEC. The Department of Lands have initiated an investigative committee to look into these different cases and also where possible, nullifying the leases that are illegal. In recent reports, about 60 to 70 SABL files have been stolen from the lands department; it is unclear at this stage as to the identity of the perpetrator/s.

The Minister for Lands – Justin Thatchenko has publicly expressed his displeasure as to the recent incident, but little has been revealed as to how these files would be recovered. This blow to the Lands Department’s SABL committee is concerning, being that this department does not observe proper archiving procedures – or rather digitize their copies for convenience as well as security.

Little has been done to redress the SABL land scheme that is still in effect in certain remote parts of PNG. There have been reports of police being sanctioned by the logging companies as well as the corrupt government officials to protect the logging sites. Much of the government’s effort towards resolving the issue of SABL has been grounded by further malpractice and corruption by the government. There has to be an independent committee set up investigate the different leases and given the prosecutorial powers to nullify and desist illegal SABL operations in PNG. TIPNG and its partners must reach out and raise its concern that there must be an independent commission dedicated towards resolving this issue, current measures taken by the government to implement the decisions made by the government.

One global movement sharing one vision: a world in which government, business, civil society and the daily lives of people are free of corruption.

In 1993, a few individuals decided to take a stance against corruption and created Transparency International. Now present in more than 100 countries, the movement works relentlessly to stir the world’s collective conscience and bring about change. Much remains to be done to stop corruption, but much has also been achieved, including: