The Challenge of Inclusion | Land Portal
Skip to main content 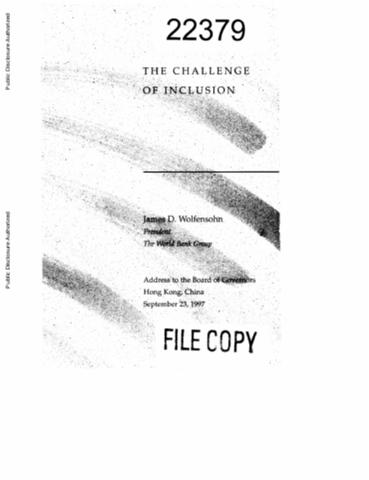 This is the address to the Board of Governors, delivered by Mr. James D. Wolfensohn, President of the World Bank, in Hong Kong, China, on September 23, 1997. This year's core theme is the challenge of inclusion, bringing people into society who have never been part of it before, the main reason why the World Bank Group exists. On reviewing the state of development circa 1997: despite improved social indicators, the rapid rise in life expectancy levels, and freedom ascending, much still needs to be improved. In East Asia, inequities between rural, and urban areas, and between the skilled, and unskilled are becoming more widespread; in the countries of the former Soviet Union, the old, and unemployed are more vulnerable amidst the turbulence caused by the transition to market economies; in parts of Latin America, unequal access to education, and health care, and disparities in income hinder progress; and, in many of the poorest countries, population growth continues to run ahead of economic growth. Considering the challenge ahead, the message for countries is to educate "your" people; ensure their health; give them voice, and justice; strong financial systems; and, sound economic policies, recognizing the link between good economic performance, and open governance, to build the broad social consensus. The effectiveness of the development community lies in building inclusive partnerships, between the governments, and the people, involving bilateral, and multilateral assistance, as well as nongovernmental organizations, and the private sector, based on good policy environments, with a look at renewing strategies. The Bank's responsiveness to this challenge has been that of commitment to the quality of work; increased accountability to measure performance; and, improved dialogue with governments. Key strategic points of change are to mainstream social issues, increase capacity building, forge sustainable development in agriculture; promote private sector participation, and strengthen financial systems.

The World Bank is a vital source of financial and technical assistance to developing countries around the world. We are not a bank in the ordinary sense but a unique partnership to reduce poverty and support development.

The World Bank is a vital source of financial and technical assistance to developing countries around the world. We are not a bank in the ordinary sense but a unique partnership to reduce poverty and support development.