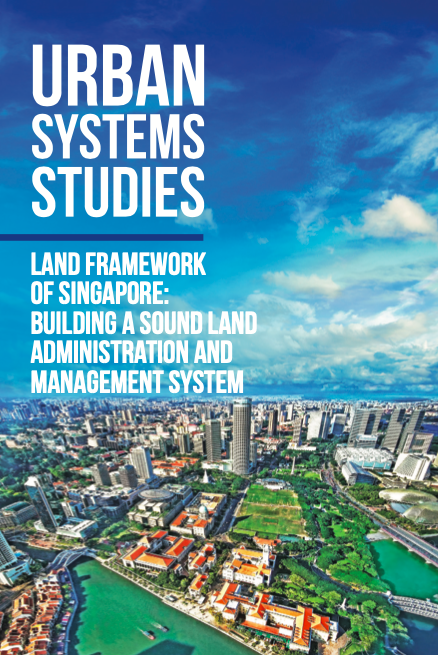 Date of publication:
December 2018
Resource Language:
English
ISBN / Resource ID:
ISBN 978-981-11-6463-7 (print); ISBN 978-981-11-6464-4 (e-version)
Pages:
65
License of the resource:
All rights reserved
Copyright details:
All rights reserved. No part of this publication may be reproduced, distributed, or transmitted in any form or by any means, including photocopying, recording, or other electronic or mechanical methods, without the prior written permission of the publisher.

Long-term planning and an efficient system of land administration and management have played a critical role in Singapore’s transformation from a colonial port to highly liveable global city.

The process includes the preparation and regular review of the Concept Plan—the strategic land use and transportation blueprint guiding Singapore’s development over the next 40-50 years—and a Master Plan that translates broad and long-term strategies into detailed policies for implementation over 10-15 years. Many of the plans are implemented through the sale of state land for private sector development.

After gaining independence in 1965, British colonial laws and institutions were extensively overhauled to enable the government to effectively allocate scarce land to support economic growth and meet the needs of Singaporeans. The earliest, and one of the most important reforms was the 1966 Land Acquisition Act. It empowered the government to secure land quickly and affordably for essential infrastructure such as a new airport, industrial estates, public housing and schools. Subsequent reforms and consolidation of important land administration and management functions—culminating in the formation of the Singapore Land Authority (SLA) in 2001—were also crucial for development.

Land use planning—which involves the preparation and review of the Concept Plan and the Master Plan—is the responsibility of the Ministry of National Development and its agency, the Urban Redevelopment Authority. Land administration—including land registration, survey, and management of state lands and properties—falls under the purview of the Ministry of Law, and several of its agencies that were reorganised into the SLA. The separation of powers and functions between the two ministries and agencies helps safeguard the integrity of the land administration and management process, including preventing potential abuse of the state’s broad land acquisition powers.

In carrying out its functions, the SLA focuses on four key thrusts: upholding a sound land acquisition framework; promoting innovative use of state properties; embracing technology in the land registration and survey system; and driving geospatial development in Singapore.

Demand for land will inevitably increase as Singapore becomes more built-up and its population grows. Government agencies, which currently own more than 80% of the country’s land, will need to constantly plan ahead and work together to strike a balance between maximising economic returns from state assets and optimising land and properties for social and community uses.

The Centre distills key learning points from Singapore’s urban development journey since its independence in 1965, while creating knowledge to address emerging urban challenges. It shares this knowledge with local and international urban leaders, with the aim of positioning Singapore as a global hub for urban solutions. The Centre’s work spans four main areas: