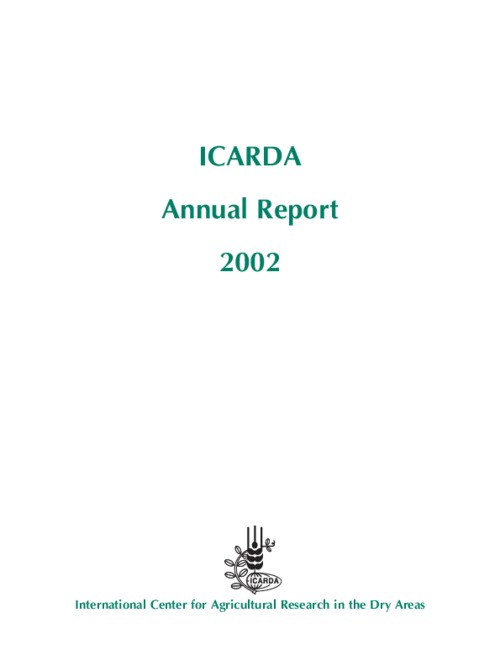 The year 2002 marked ICARDA's 25th anniversary, and coincided with several honors and awards for the center's excellence in research. Research on developing high-yielding kabuli chickpea varieties that thrive in cool, wet winter conditions earned the 2002 King Baudouin Award of the Consultative Group on International Agricultural Research (CGIAR), jointly with the International Crops Research Institute for the Semi-Arid Tropics (ICRISAT), which focuses on desi chickpea. Several ICARDA researchers won both national and regional awards for their contributions to improved crop production and protection of the natural resource base in dry areas.
The Center made a substantial contribution to the global efforts to rebuild agriculture in Afghanistan. In January, it convened a meeting in Tashkent, Uzbekistan, which was attended by representatives from 34 international organizations, including non-governmental organizations, and 10 of the 16 CGIAR centers. Based on the recommendations of the meeting, the Future Harvest Consortium to Rebuild Agriculture in Afghanistan was established. The United States Agency for International Development (USAID) and the International Development Research Center (IDRC) provided funds to implement the Consortium activities.
Led by ICARDA, the Consortium made rapid progress. With the overall objective of restoring and enhancing the food production capacity of farmers in Afghanistan, priority was given to multiply and deliver quality seed of adapted varieties to rebuild, with Afghan partners, an effective seed multiplication system that promotes the use of high-quality seed. As part of this effort, over 3500 tonnes of certified seed of wheat was provided for spring planting, and 5000 tonnes for the fall 2002 planting. The seed reached over 100,000 farm families. A "Code of Conduct" was developed to form the basis for a national seed policy and regulatory framework for Afghanistan.
The Consortium's research agenda went much beyond seed systems. It organized four needs assessments that obtained information from farm families throughout the country on (i) seed and crop improvement, (ii) soil and water management, (iii) livestock, forage and range, and (iv) horticulture. Information from these assessment missions was reviewed and discussed at a wrap-up meeting held at ICARDA in November 2002, and will form the basis of a wide range of crop, livestock, and infrastructure rehabilitation projects in 2003 and beyond. Several research laboratories were refurbished. Over 100 Afghan researchers were trained in key areas of research. The Center continued its efforts with increased momentum to strengthen its partnerships. To set regional priorities for agricultural research in the CWANA region and integrate them with the CGIAR priorities, researchers and research administrators, and representatives from the non-governmental organizations, farmer associations and the private sector, from throughout Central and West Asia and North Africa (CWANA), met at ICARDA headquarters to review the recommendations of the five sub-regional priority-setting meetings organized by ICARDA, in cooperation with the Association of Agricultural Research Institutes in the Near East and
North Africa (AARINENA) and the Regional Forum for Central Asia and the Caucasus (CAC) in 2001/2002. This effort should help increase the relevance, efficiency and impact of ICARDA's research. The year saw increased participation of ICARDA in global conventions and in implementing their recommendations.
The Center participated in the World Summit on Sustainable Development (WSSD), held in Johannesburg, South Africa. On behalf of the CGIAR, the Director General of the Center made a presentation in which he highlighted the role of agriculture in improving the quality of life of the poor, in protecting the natural resource base, and in promoting economic growth. He also made a statement on CWANA at the plenary devoted to regional implementation of the WSSD action plan.
ICARDA enters 2003 with increased focus on its mission to improve the welfare of the poor in the world's dry areas while preserving the natural resource base upon which we all rely. The Center's Board of Trustees, Management and Staff thank all of ICARDA's donors and cooperators for their continued support, and look forward to a productive and peaceful 2003.

The International Center for Agricultural Research in the Dry Areas (ICARDA) was established in 1977. It is one of 15 such centers supported by the CGIAR. ICARDA’s founding mandate to promote agricultural development in the dry areas of developing countries remains highly relevant today.

The International Center for Agricultural Research in the Dry Areas (ICARDA) was established in 1977. It is one of 15 such centers supported by the CGIAR. ICARDA’s founding mandate to promote agricultural development in the dry areas of developing countries remains highly relevant today.