When a small group of armed insurgents in cars arrived in a village in the Wakhan Corridor, it put a sharp focus on Beijing’s role in this nation shattered by more than four decades of war.

Main photo: A Kyrgyz family in the Wakhan Corridor, a narrow strip of land that connects Afghanistan to China. CREDIT: MARTA PASCUAL JUANOLA

The nondescript sedans rolled into the Afghan hamlet of Qala-e Panja in the early afternoon. The air was unusually clear, with no sign of the fierce dust storms that often sweep the narrow valley.

Several men armed with Kalashnikovs stepped out of the cars. There was a ripple of applause and cries of “long live the Islamic Emirate!” as the armed men raised their fists in front of dozens of villagers.

So it was that a strategic region in Afghanistan’s north which had never fallen to the Taliban came under their control this month, following a lightning offensive that captured several districts and forced Afghan soldiers to retreat.

Taliban fighters conquered Badakhshan province in early July during a lightning offensive that saw hundreds of Afghan soldiers flee across the border to Tajikistan.

As the Afghan government concentrates its limited military strength on protecting cities, the Taliban are taking easy targets in rural areas and seizing border crossings, including with China, which experts say could shift the balance of power in negotiations.

Afghanistan and China share a 74-kilometre border in the remote Wakhan Corridor, a narrow stretch of land in Afghanistan’s Badakhshan province between the Pamir, Hindu Kush, and Karakoram mountain ranges.

The corridor also borders Tajikistan to the north and Pakistan to the south and acted as a buffer zone between the Russian and British empires in the 19th century during their “Great Game” struggle for Central Asia.

Thirty Taliban militants shot their weapons into the air as they marched into the bazaar of the sleepy town of Ishkashim, the gateway to the corridor, on July 4, rounding up hundreds of villagers at the mosque to ask for their loyalty.

The takeover was bloodless and swift. Nobody resisted and within hours the insurgent group’s white banner emblazoned with the Islamic creed hung in shopfronts and official buildings.

Earlier that day, hundreds of Afghan security forces had fled into Tajikistan, leaving posts unmanned and Humvees abandoned as the Taliban conquered district after district in Badakhshan.

Some hadn’t eaten for three days, others didn’t have bullets to load their weapons. The rest were too scared to face the insurgents without the support of US troops, who had vacated Bagram Air Base, about 70 kilometres north of Kabul, just days earlier.

Those who didn’t flee across the border returned to their villages or joined the Taliban.

“People [took] everything before the Taliban arrived. Military equipment, food, rugs, clothes, computers, everything,” a villager who did not want to be named for fears of retribution said.

On the other side of the Panj River, the natural border between Afghanistan and Tajikistan, people watched in horror from the Tem bridge in Khorugh, where Tajik and Afghan traders meet to trade their wares every few weeks, as the Taliban raised their flag in celebration. 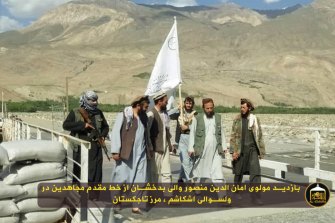 Footage from the Taliban’s propaganda arm, al-Emara, shows insurgents carrying the group’s flag at a bridge in Ishkashim between Afghanistan and Tajikistan.

Within hours, they had conquered the Wakhan and seized Sarhad-e Broghil, the last village before the arduous trek to the Pamir, the final stretch of land separating Afghanistan from China.

Tajik programmer Shodi Rashidbekov, who witnessed the flag-raising from the Tem bridge, said he hadn’t heard from his relatives in Afghanistan since the Taliban’s advance.

“If we look at history we have suffered a lot from radical groups, of course we are worried, but our country is [ready] if something happens,” Rashidbekov said. “We are more worried about our brothers who live on the other side of the Panj River.”

Women in parts of the district have been banned from working and leaving their home without a male guardian, while men have been barred from shaving their beards. Border areas have been cut off from essential government services and civil servants haven’t been paid their salaries for weeks.

The Taliban takeover of the corridor could be the first step to gaining international legitimacy from China ahead of fresh negotiations with the Afghan government, says Lowy Institute research fellow and former army officer Dr Rodger Shanahan.

“If they’re the people who can guarantee to China that their interests in that corridor will be looked after, then at least they’ve gone part of the way to having one of the two major countries in the world, if not on their side, at least not against them,” he says.

The move shows the Taliban want to keep friendly relations with China, former Afghan parliamentarian and peace negotiator Fawzia Koofi says. But the group’s newly gained international status in the wake of their historic deal with the US in Doha last year could embolden Uighur militants and strain relations with Beijing. 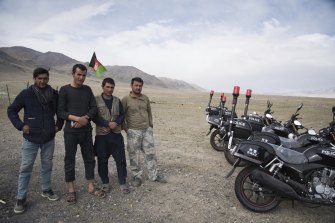 It wants to expand its Belt and Road Initiative to Afghanistan and connect the country to Pakistan through the China-Pakistan Economic Corridor in order to gain direct access to markets in Central Asia and the Middle East, but the project’s success hinges on Afghanistan’s ability to maintain peace and security.

The Taliban have said they consider China a friend and will not host Uighur militants from the country’s Xinjiang region but some fear they might have already returned to Afghanistan. China has cited Islamist extremism as a justification for its policy of mass detention in Xinjiang.

When the Taliban rose to power in the 1990s, China’s main concern with the insurgent group was the Uighur question. Afghanistan had become a base for the East Turkestan Islamic Movement (ETIM), which the UN linked to al-Qaeda, and militants from Xinjiang were training in camps located in Taliban-controlled areas. 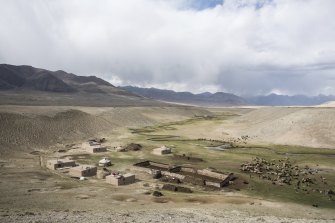 A storm brews over the Karakoram mountain range. The settlement of Sultan is the last inhabited hamlet before Afghanistan’s border with China. CREDIT: MARTA PASCUAL JUANOLA

Shanahan says Beijing is interested in stability above all else and will deal with whoever is in power. However, it is unlikely to put troops on the ground in Afghanistan.

In a sign that other regional powers are having to contemplate a Taliban ascendancy, Indian officials secretly met with Taliban leaders in Doha in June, according to reports by The Hindu.

To date the Taliban have seized power in several provinces and heavy fighting has erupted in Qala-e Naw, the insurgent group’s first direct assault on a provincial capital since the US began to withdraw troops.

The group has focused on taking border crossings with Iran, Turkmenistan and Tajikistan, in a bid to cash in on lucrative customs revenue.

Their success seizing large swaths of territory has been aided by the infighting, lack of consensus and nepotism plaguing the Afghan government, which has focused on putting out spot fires instead of strategising and gathering popular support, says Koofi.

For stretched Afghan security forces trying to protect urban centres and retake key districts, remote regions such as Badakhshan are likely to be a low priority.

Meanwhile, residents of the Wakhan Corridor – most of whom are from the Tajik, Wakhi and Kyrgyz ethnic minorities and belong to the Shiite Ismaili sect of Islam – fear persecution at the hands of the Taliban, who adhere to a strict interpretation of Sunni Islamic doctrine. 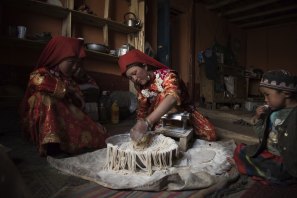 “I am worried about the future of my family. Thank God they still haven’t hurt anybody ... but I don’t know what will happen in the future,” a father-of-four from Ishkashim told The Sydney Morning Herald and The Age.

A farmer from Sarhad-e Broghil who had relocated to Mazar-e Sharif for work said he was considering paying smugglers to take him across the border to Iran if the town fell, but worried about his wife and children left behind in the corridor.

Shanahan says the Taliban had sought to reinvent themselves since the days of their rule in the 1990s but it was only a matter of time before ethnic and religious minorities became a target.

“Ideological organisations might be able to paper over those issues at the start because they want to be seen to be Taliban 2.0 ... so they’ve got a bit more legitimacy,” he said.

Koofi - who comes from Badakhshan - remains hopeful the negotiating team will broker a peace deal with the Taliban before the September 11 deadline, but concedes the insurgents currently hold the upper hand and that violence is unlikely to abate in the coming months.

“If we reach a deal at present, as things are right now, it will be in the interest of the Taliban because they are already controlling large parts of Afghanistan,” she says. “But that’s not going to bring stability to Afghanistan.”