The event was a surprise for the new landowners, some of whom have been waiting more than 20 years to obtain a property deed for their parcels and homes. It was also a surprise for the town’s other residents, many of whom caught the action on a Facebook live video and interacted with the mayor to learn more about the municipality’s efforts to formalize property.

Between house visits, Mayor Mancera, who used a mask throughout the entire video to limit the spread of COVID-19, stopped and looked at the camera explaining to her followers how Fuentedeoro’s Municipal Land Office is playing a key role in allowing her to formalize public properties like schools and health clinics, as well as lands that were donated by the city for social housing.

In a visit to Doña Silvia Garzón, Mayor Mancera explained that: “these property titles are thanks to the coordinated efforts of the Municipal Land Office, the nation’s property registry SNR, the regional government, and USAID. It’s an effort made by all to bring this happiness and the good news that, as of today, you are officially the owner of your property.”

Doña Silvia, like most, was pleasantly surprised to receive the mayor at her front door. She explained through her mask that although she has thought about starting the process of obtaining and registering a land title, the procedure’s costs and the idea of having to pay property taxes have kept her from seeing it through. 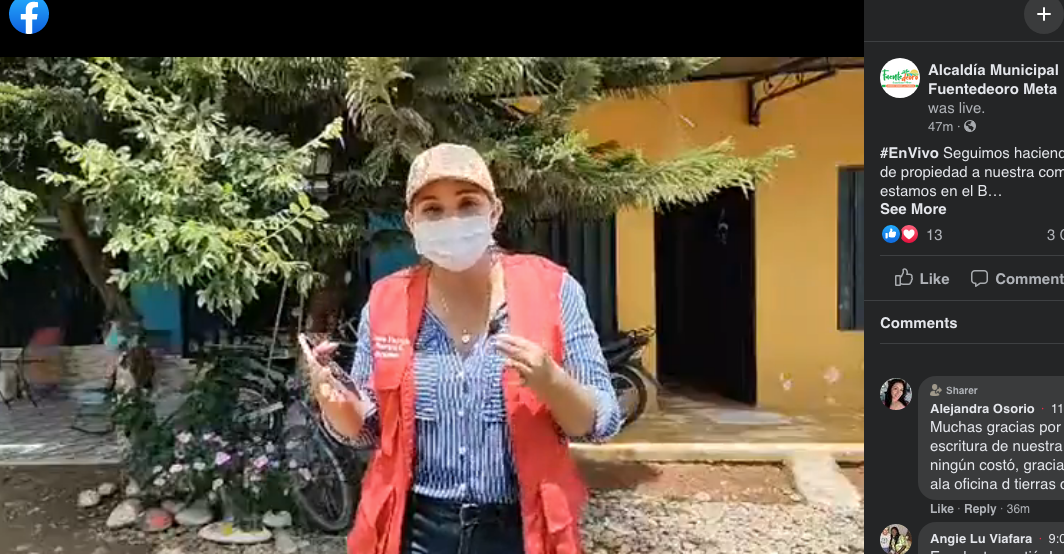 In Colombia, 6 out of 10 rural properties are informally owned, meaning the owners have no land titles or registered records that the land is theirs. It also means the land parcel does not appear in the country’s land cadaster. Land informality is an obstacle for economic development and poses long-term security risks for landowners, especially in a country like Colombia where violence and internal displacement are commonplace.

To help remedy this situation, USAID is working with the Colombian government on building national and local capacity in land governance. One aspect of the strategy includes the creation of Municipal Land Offices in target municipalities. Another is building the national government’s ability to carry out massive land formalization campaigns in target municipalities. Finally, the USAID strategy facilitates partnerships and mobilizes resources to help create economic opportunities that can catalyze transformation in rural areas that are traditionally underserved.

“USAID has stepped up and helped us by integrating our municipality into their programming and helped us with the creation of the Municipal Land Office,” Mayor Mancera said.

She reminded her audience and the new landowners that without their commitment and confidence in local government, Fuentedeoro’s Municipal Land Office would not be able to process their titles. It is true that without community buy-in, building a formal land market is practically impossible. 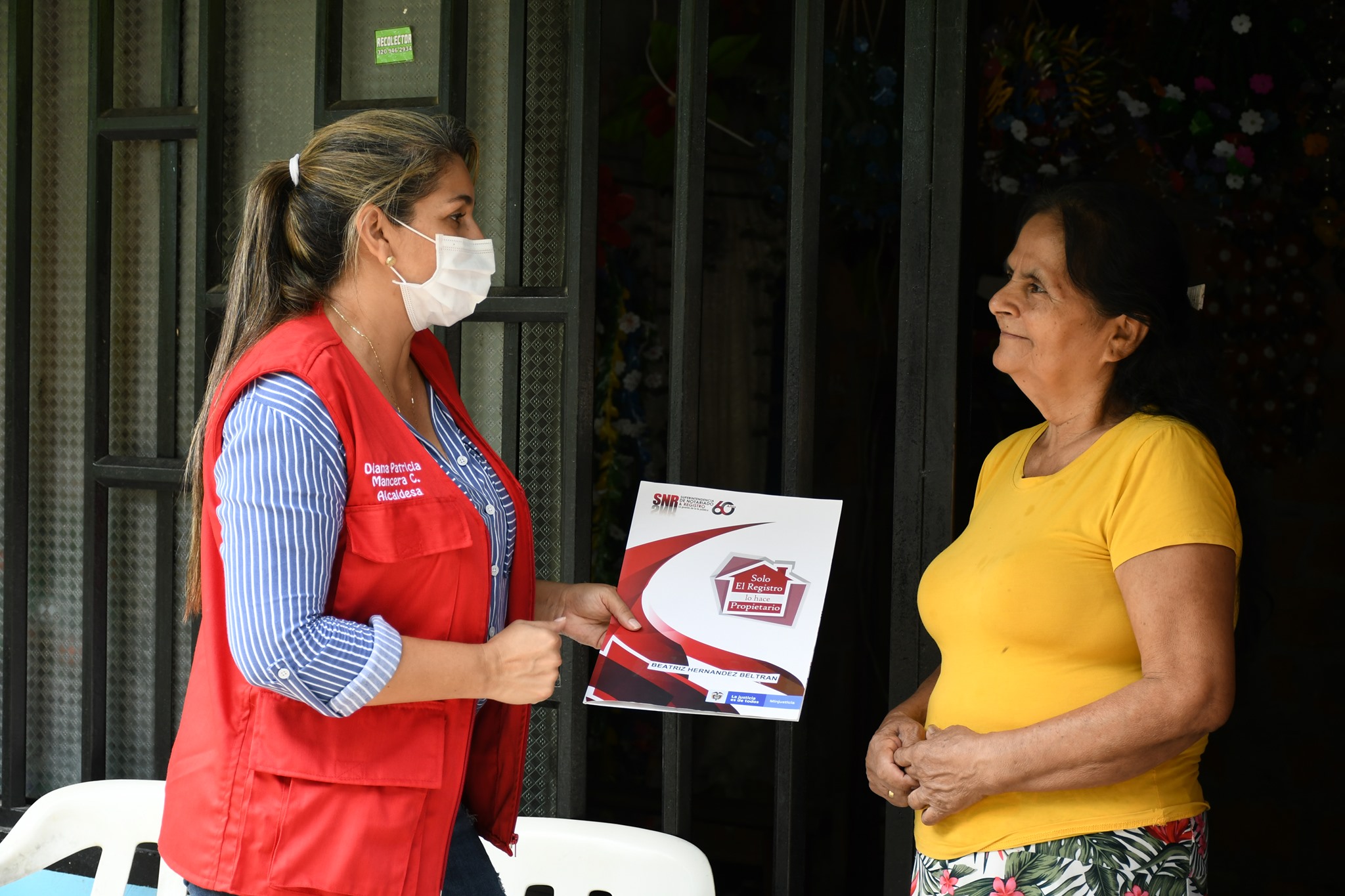 The Mayor then knocked on Doña Alexandra’s door. Alexandra has been waiting several years to obtain a land title. Over the past six months, Alexandra too, worked with the Municipal Land Office and provided the necessary documentation for them to formalize the property in her name.

“I can’t believe it. No, no, no. I can’t… I’m going to cry,” Alexandra said. “This was something that seemed to be impossible to me for so long. Now I realize that nothing is impossible. I am now so happy. I’m going to find my family and we are going to celebrate tonight.”

At one point, after the Mayor had already delivered several deeds, Luz Stella Vásquez, a resident of Fuentedeoro, posted a question in the video’s comments: “When will the titles be delivered to the families living on parcelaciones?”  These are lands that were granted to thousands of families around Colombia by the former land authority, known as INCODER. None of the lands came with land titles, and in Fuentedeoro, there are six of these collective land ownership agreements involving more than 160 families.

To answer Luz Stella’s question, the mayor in partnership with David Peroza, a land expert from USAID’s Land for Prosperity Activity, explained that land titles for all six parcelaciones are currently being processed, and that before the end of the year, Fuentedeoro’s own massive formalization campaign will be underway to formalize every single property in the municipality.

By the end of the day, the mayor had delivered 45 land titles to residents living in the town center of Fuentedeoro, and several neighbors appeared on the mayor’s live feed in social media. 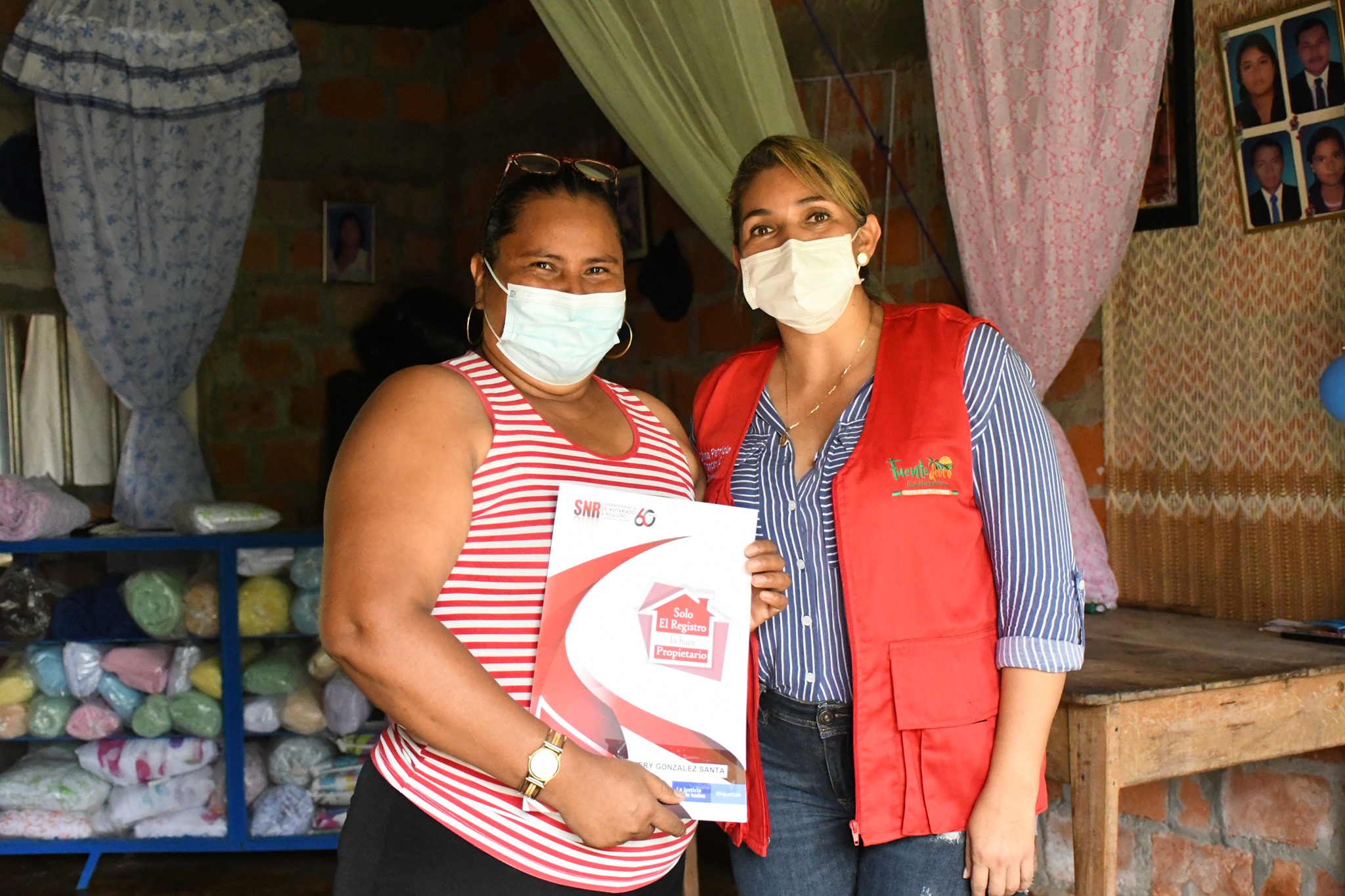 Colombia is a country where rural land administration services are available to those who could afford them. Fuentedeoro’s Mayor, Patricia Mancera, has likely made history by knocking on doors and delivering land titles to her constituents. The gesture is indicative of a larger shift towards an equitable land administration system, which is the foundation of rural development and good governance.

And if anybody questions the decision to use social media to transmit these types of messages about the municipality’s land formalization services, they should know that within the first 24 hours, the video already had 2,500 views. Fuentedeoro is home to 12,000 people.