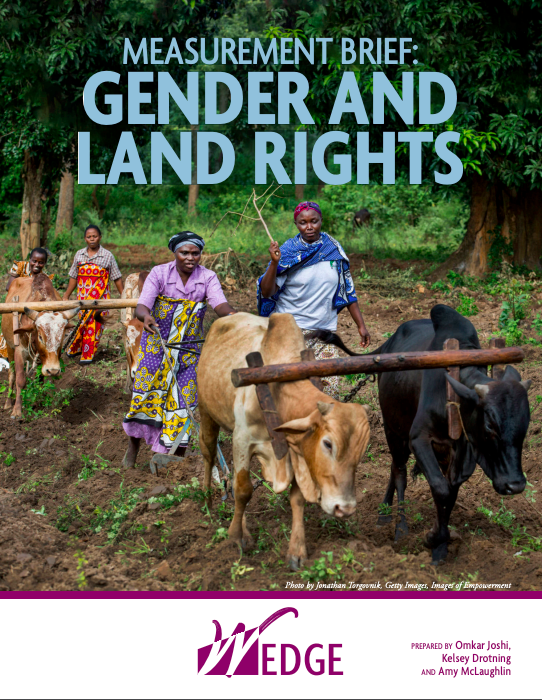 Gender and land rights are closely intertwined with each other. Globally, more than 400 million women work in agriculture. Women comprise 43 percent of the agricultural labor force in developing countries, yet they account for less than 20 percent of landholders (FAO 2011). These disparities are even higher in some regions. In Sub-Saharan Africa and South Asia, 60 to 70 percent of employed women work in agriculture, with similar rates of land ownership (that is, less than 20 percent). Research which examines gender disparities in land ownership in Sub-Saharan Africa using the Demographic and Health Survey (DHS) measures has found that men are three times more likely to claim sole ownership over land than women (Gaddis, Lahoti, and Li 2018).

Land ownership provides women with a source of economic stability, which improves health and many other outcomes. Agarwal (1994) argues that it is the single most important factor in determining women’s economic success. Several of the goals set by the 2030 Agenda for Sustainable Development, specifically emphasize the importance of women’s land rights: Goal One, recognizing women’s land rights as an explicit cross-cutting catalyst to ending poverty; Goal Two, seeking to achieve food security and improved nutrition; and; Goal Five, achieving gender equality and women’s empowerment. Securing women’s right to own and inherit land is essential to achieving gender equity, reducing poverty, and improving the health of families and communities around the world (Council on Foreign Relations 2018).

Despite these goals, in many countries, women do not have land rights independently of their husbands or male relatives because of a variety of reasons, pertaining to institutions, gender norms, the legal system, and intra-household dynamics.

The following three issues are central to understanding the interplay between gender and property rights:

1. The source of the land—inherited, acquired through purchase, or state-inherited (Agarwal 2003): Each of these pathways is gendered in ways that disadvantage women. Agarwal argues that the current patriarchal systems of acquisition through the family or market can be overcome by the collective investment of women working together to assume ownership of their own lands.

2. Effective control over the land—even though farming is increasingly becoming feminized, women often do not own the land on which they work (Salcedo-LaVina 2017): If women have no say over the use of the land, it paves the way for the sale or use of the land in a way that provides them no benefit.

3. Intrahousehold dynamics—it has been observed that often a woman, in order to maintain good relations with the men in her household for ensuring future economic support for herself (particularly if she becomes a widow), has to relinquish her rights over the land (Cain, Khanam, and Nahar 1979).