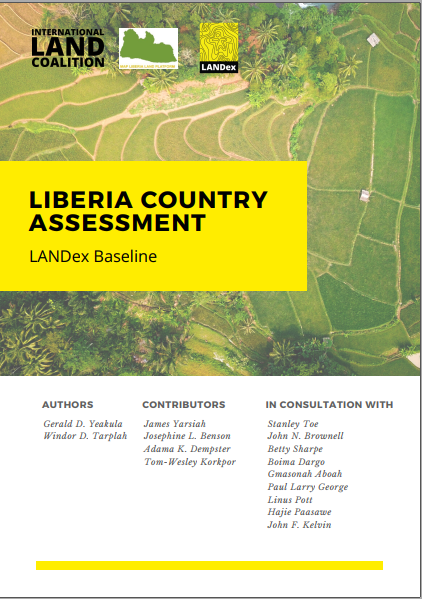 This report presents a full Country Assessment of land governance in Liberia carried out with the Global Land Governance Index (LANDex). As the first full report on Liberia, the report assesses the country on 33 indicators related to land governance, which are organized according to the 10 Commitments to People-Centered Land Governance and thematic areas that define and guide the work of the International Land Coalition (ILC). This approach measures land governance on three levels: i) the strength of the legal and institutional framework surrounding a land issue, ii) the degree to which policies or programs established in such frameworks had been implemented, and iii) diverse outcomes, impact or perceptions of implemented projects or policies.

All LANDex indicators are set on a 0- 100 scale, with 100 being the highest ossible score. A high score reflects the extent to which a country has fulfilled all aspects of the indicator, whether calculation-or evaluationbased. LANDex scores are not meant to rank countries but rather allow the land community to assess how the country is performing on important aspects of land governance. Through time, these scores reflect to what extent land governance appears to be improving or worsening in specific areas. Five LANDex indicators – 1B, 1C, 3C, 4C and 5C.1 – are based on the calculation of variables from Prindex, a global survey that collects data on rates of property documentation and perceptions of tenure security.

The findings herein are based on nine out of the 10 Commitments since the commitment on secure territorial rightsfor indigenous people was found not to be relevant in the Liberian context. The commitments captured include: secure tenure rights, strong small-scale farming systems, diverse tenure systems, equal land rights for women, locally managed eco-systems, inclusive decision making, transparent and accessible information, effective actions against land grabbing, and protected land rights defenders.