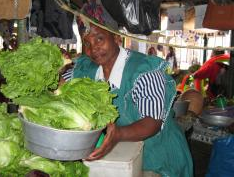 [adapted from CMI] The Government of Mozambique made achievement of gender equality a major objective in its Poverty Reduction Strategy, and specifically recognises that the empowerment of women is a decisive factor in the eradication of poverty. It also recognises that there are gaps in the gathering and analysis of data that is broken down by sex, and that those gaps must be filled.  On the basis of a combination of quantitative and qualitative research methods, the Chr. Michelsen Institute project attempts to i) assess the thesis of an on-going feminisation of poverty in Mozambique and ii) discuss the implications of the economic and socio-cultural position of women for gender equality and poverty reduction policies in the country.

The first project in the series outlines current policies and interventions by the Mozambican government and some of the main donors in the country, and consults existing gender-disaggregated quantitative data to test the viability of the thesis of an ongoing feminisation of poverty on a national level. Following the overall assessment, two localised studies based on participatory and qualitative methodologies contextualise and assess the thesis and its causal assumptions. Particular references are made to women's role in the informal economy in Report 2, and the coping strategies of poor female headed households are considered in the third report.

The key land-related findings of the project are that major discrepancies exist between men's and women’s access to land and agricultural production, employment and income, education, health and legal rights. In addition, a large majority of women in Mozambique still depend on subsistence agriculture, but in an increasingly commoditised social setting the importance of the informal economy in the generation of income among women, both in urban and rural areas, is probably underestimated. The project thus recommends targetted interventions to raise women’s control of land, productivity and access to markets in agriculture, on which the large majority of women in Mozambique depend

To read the first report ‘Gender Policies and Feminisation of Poverty in Mozambique’, please visit http://www.cmi.no/publications/publication/?3326=gender-policies-and-feminisation-of-poverty-in (Also available in Portuguese)

To read the second report ‘“If men and women were equal, we would all simply be people”. Gender and Poverty in Northern Mozambique’, please visit http://www.cmi.no/publications/publication/?3556=if-men-and-women-were-equal (Also available in Portuguese)

To read the third report ‘“A woman should not be the boss when a man is present”. Gender and poverty in Southern Mozambique’, please visit http://www.cmi.no/publications/publication/?3779=a-woman-should-not-be-the-boss-when-a-man-is (Also available in Portuguese)