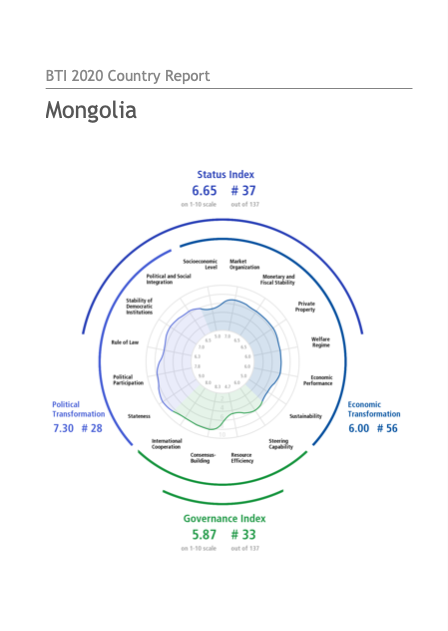 EXECUTIVE SUMMARY: In July 2017, Democratic Party candidate Khaltmaa Battulga was elected Mongolia’s new president with 50.61% of the vote, defeating his rival Miyegombo Enkhbold from the ruling Mongolian People’s Party (MPP) who received 41.16% of the vote. Importantly, 8.23% of the voters in the second round chose the none-of-the-above option, the so-called blank ballot. Mongolians believe in democracy as a guiding general principle and vision, but they have less trust in the fairness and effectiveness of political institutions. The State Great Khural was paralyzed several times due to an escalation in frictions between major factions within the ruling MPP. Political scandals, such as some 20 members of parliament having allegedly benefited from the state-run SME fund and sexual misconduct allegations against of some members of parliament led to parliament having the lowest public approval of any state institution. In this context, debates over the effectiveness of parliamentary and presidential systems intensified. A number of prominent politicians, columnists and researchers called for establishing a strong presidential system.

The prevalence of clientelistic networks, a lack of opportunities for the younger generation and a lack of financial transparency in major political parties are all serious threats to the country’s democratic transformation. There is increasing public dissatisfaction and frustration regarding the lack of democracy and accountability within political parties. Public opinion surveys have continuously confirmed that the majority of Mongolians do not trust political parties.

Mongolia’s economic performance improved dramatically in 2017 and 2018 with the GDP growing by 6.4% in 2018. Copper and coal production and exports increased significantly in 2018. Under an IMF program, the government made significant improvements in fiscal performance, mainly through stricter control of public spending. However, poverty remains one of Mongolia’s biggest issues. The poverty rate in Mongolia declined from 38.7% in 2010 to 21.6% in 2014 and rose again to 29.6% in 2016. Furthermore, there are serious income disparities across regions and localities. Poverty in rural areas remains higher than in the main urban centers. Urban poverty increased, especially among people residing on the outskirts of the ger/yurt districts of the capital city where access to clean air, water and sanitation remains problematic.