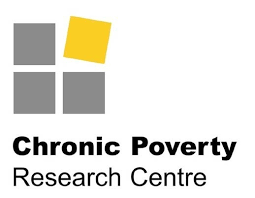 The CPRC is an international partnership of universities, research institutes and NGOs established that provides research and policy guidance on the reduction of chronic poverty.

Nearly half a billion people are trapped in chronic poverty – poverty they experience over many years, often over their entire lives, and commonly pass poverty on to their children.

Those living in chornic poverty die prematurely from preventable causes and experince multi-dimensional deprivation – hunger, under-nutrition, illiteracy, lack of access to basic services, and social isolation and exploitation. CPRC research shows that they are economically active, but poor quality and insecurity of work, and social discrimination impacts on their economic prospects and access to basic services.

The long duration of chronic poverty shows that it is also structural – underpinned by  social, economic and political systems. If not addressed urgently, today's poor may also be tomorrow's poor.

People in chronic poverty have benefited least from economic growth and development. They, and their children, will make up the majority of the 900 million people who will still be in poverty in 2015, even if the Millennium Development Goals are met. International efforts to reduce poverty cannot be selectively applied, with chronically poor people excluded on the basis that they are too hard to reach.

The MDGs can be fully achieved only if chronic poverty is tackled effectively. This means that understanding the manifestations, attributes and social dynamics of chronic poverty to develop additional national and international interventions is crucial.

The remaining period to 2015 should be used intensively to experiment with approaches and programmes which can help set the direction towards this goal.

CPRC research suggests that millions of people will remain in poverty without  policies that specifically address their situation. Current efforts to reduce poverty often neglect the chronically poor – which also affects economic growth. As countries move to reduce absolute poverty, more of the poverty that will be left behind is chronic, increasing the urgency to tackle chronic poverty.

But current knowledge of what works for the poorest, and growing evidence that there are policies that can address chronic poverty, reveals that eradicating chronic poverty is possible. Avoiding taking action in an affluent world that has the knowledge and resources to eradicate it, is not just morally unjust, but also impacts on a state’s political legitimacy.