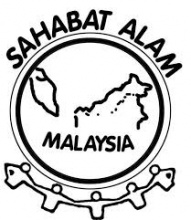 Sahabat Alam Malaysia (SAM) or Friends' of the Earth Malaysia, is an independent non-profit national organisation established in 1977. SAM is a registered body under the Societies Act 1966 and has been a member of the Friends of the Earth International since 1983.

SAM is involved in a variety of activities and campaigns to ensure that environmental justice is linked to social justice and that development choices and the management of natural resources are sustainable and ecologically-sound. It supports the struggle of the indigenous peoples in defending their indigenous customary rights and the natural resources of the tropical rainforests.

We operate 2 offices; one in Penang in Peninsular Malaysia and the other in Sarawak on the island of Borneo. The Penang office remains the headquarters of SAM.

To create a peaceful and sustainable world based on societies living in harmony with nature. We envision a society of interdependent people living in dignity, wholeness and fulfillment in which equity and human and peoples' rights are realised. We believe that our children's future will be better because of what we do.

Our activities include educating the general public on the need for ecologically sound development; assisting communities which have been adversely affected by so-called development; and strongly advocating for a development model that is ecologically sustainable, socially just and fulfils the human needs of the majority.We are a small team of dedicated staff that works closely with grassroots community, conducts in depth research into a variety of issues, lobby law and policy makers both at national and international levels, builds like minded alliances and prepares materials for publication which cater to different strata of society. We also work closely with our lawyers in giving legal advise to communities and where necessary represent them in legal suits. SAM’s work has led to greater environmental awareness and policy and legislative reforms in the area of environmental quality, pesticides use, occupational safety and health, fisheries, depletion of non-renewable sources, wildlife conservation, etc.

We have for years empowered farmers, fishermen, Orang Asli and Asal (Indigenous Peoples), students and women through education and awareness raising workshops on fundamental rights in the constitution. During the course of our work we have trained both young and old activists to set up their own organisations to bring to fore any injustice they come across. To date SAM has helped set up more than 20 active local groups and indigenous peoples residents' associations in Malaysia.

Who we work with

Our work does not only stop with the rural and minority communities, we also work with government agencies, parliamentarians, other community based organisations and NGOs, public interest lawyers and the media.

For its efforts in highlighting the destruction of the tropical rainforests in Sarawak and in bringing the plight of the indigenous peoples to the attention of the international community, SAM was awarded the Right Livelihood Award also known as the alternative Nobel Prize in 1988 and the Goldman Award in 1991. In 1987, SAM was awarded the Global 500 Honour Roll and in 1998, we received the Conde Nast Travel Environment Award.