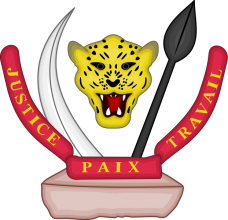 The Democratic Republic of the Congo (French: République démocratique du Congo), also known as DR Congo, the DRC, Congo-Kinshasa or simply the Congo, is a country located in Central Africa. It is sometimes referred to by its former name of Zaire, which was its official name between 1971 and 1997.

Under the constitution of the Third Republic, the government is composed of a cabinet of ministers, deputy-ministers (vice-ministers), and occasionally state-ministers (which is a senior personal honorific title). The number of these ministers vary from one government to the next.

The cabinet is headed by the Prime Minister, also known as the head of government, appointed by the President, from the political party, the group or the coalition that holds the majority of seats in the National Assembly.

In the Democratic Republic of the Congo, the cabinet is more commonly simply referred to as The Government.

Government of Democratic Republic of the Congo Resources

The constitution was adopted by the National Assembly, and was promulgated by the President following the approval of 84.31% of voters in a national referendum.