Woman Lekhpal – One step towards change 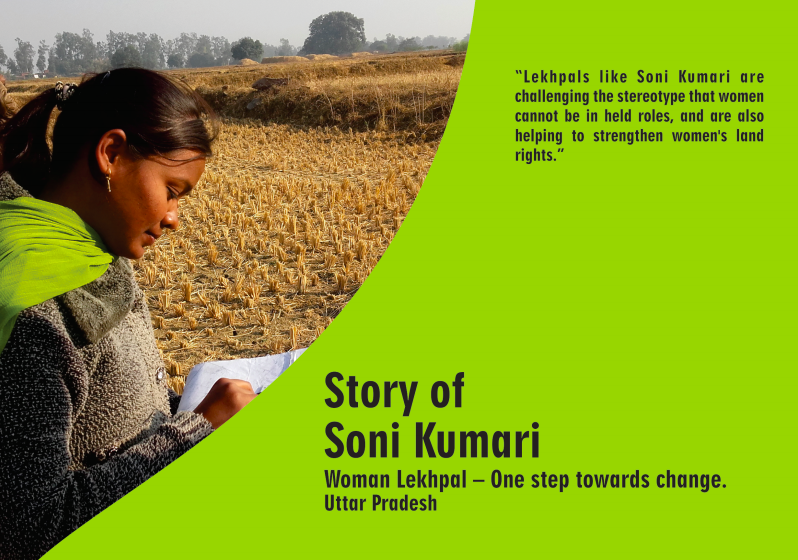 Inadequate laws and policies, patriarchal mindsets, an unwelcoming system, lack of mobility due to traditional patriarchal norms, anda  dearth of information about laws, are just some of the main reasons for the uneven distribution, ownership and control of land for women.  Furthermore, women’s participation and access to public forums in this context is limited, at best, whether it is in their own village, panchayat, block, tehsil or district.  In Uttar Pradesh, the Revenue Department is often occupied in large part, if not entirely, by men. While it may seem as though women are unconcerned with dealing with the Revenue Department, the reality is that that it is precisely the absence of women within these spheres and environments, which makes women apprehensive to enter these spaces both practically and figuratively, keeping them away from their rights.

In 2016, when the Uttar Pradesh state government took the decision to recruit around 4000 new Lekhpals, it was decided that women would be given equal consideration for these positions.  This was a small, but important step towards changing gender dynamics. Ms. Sonki Kumar is one of the women who has benefitted from these positive changes. She is a fast-paced and confident Lekhpal who considers herself equal to all male Lekhpal, if not more powerful! She says: “It was very difficult in the beginning, especially when you are a woman and everyone thinks it is very difficult for a woman to do this kind of work, but I do not think this way and I do my work with full devotion and try to show that women can do anything.”

Soni Kumari is 25 years old and comes from the Gaya district of Bihar state.  At just twenty-five years old, leaving her home state for work was a very brave step, but has been an essential move forward in terms of breaking the barriers that render and keep women powerless.  In the beginning, the difficulties seemed insurmountable, especially as she was tackling people’s mindset and the very systems which restrict women from performing their workplace duties. Furthermore, there was no formal training conducted for female Lekhpals to learn about their roles and and assignments.  Astonishingly, they were expected to learn skills on site, from senior Lekhpals, which was additionally challenging for the newly employed women. Soni gives a lot of credit to the training which Landesa provided to all the newly enrolled Lekhpals; she remembers, ‘That was the first formal training I had received since I took charge in early 2017. I gained a lot of confidence about the land allocation process and decided to tackle the issue in my village. There were already 62 land-titles that were allocated but the beneficiaries were waiting for the possession. The land allocated to these families were in 8 different patches and were mostly encroached by the elites/powerful people of the village. I faced a lot of resistance and threats, but finally was able to complete the process of demarcation and possession was given to almost 90% of the beneficiaries. I have taken special care that women should be part of all the processes, as being a women I can understand that women are usually kept out of these things and ultimately excluded. In the process, I got the support of a senior Lekhpal and Landesa, which kept me courageous and I continued the work I was doing.’

Landesa has developed a module for the training of newly elected Lekhpals on a pilot basis and has trained 305 Lekhpals, of which 51 were women. This training was on land allocation processes, as well as the land rights of women. The training has resulted in many Lekhpals coming out as sensitive and confident, especially the women Lekhpals. Lekhpals like Soni Kumari are challenging the stereotype that women cannot be in field roles, and are also helping to strengthen women’s land rights.