Large-scale investments in agriculture and forestry have far-reaching implications for the lives of affected individuals and communities. They are also an integral part of efforts by national governments to implement the Sustainable Development Goals (SDGs) and improve the governance of land resources. Despite their significance, these “land deals” and the contracts that govern them are often cloaked in secrecy, removed from relevant spheres of public scrutiny and debate.

A recently launched initiative seeks to reduce this “black box” nature of land deals. OpenLandContracts.org serves as the first online repository of publicly available land, agriculture, and forestry contracts. Launched in October 2015, this repository aims to promote transparency, facilitate disclosure, and catalyze broader awareness and understanding of land contracts and their implications.

Land deals are frequently governed by contracts between host governments and investors. These land contracts play a pivotal role in determining the outcome of land deals, defining the parties’ rights and obligations, allocating risk, and affecting a range of social, economic, and environmental issues. When considered alongside developments in international investment law, the impact of land contracts can be even more far-reaching. Investment treaties and the protections they create for investors can make it costly for states to modify or adopt new policies, potentially chilling efforts to improve land governance and promote responsible investment in agriculture and forestry.

Despite their public significance, very few governments disclose the land contracts they have signed. To date, only one country, Liberia, makes their commercial agriculture and forestry contracts publicly available. Two others, the DRC and Ethiopia, have disclosed some of their land contracts. Sierra Leone has recently committed to disclosing 70 percent of its agricultural lease agreements.

Aside from the contracts themselves, land contract negotiations generally take place behind closed doors, casting doubt on whether the interests of all relevant stakeholders are sufficiently represented by those at the negotiating table. Local communities and land users, for example, are often precluded from participating in negotiations, or from shaping the outcomes of land deals that profoundly affect their lives. For such groups, land deals can result in dispossession, displacement, loss of livelihood, and violations of a wider network of rights that are deeply affected by access to and control over land and its natural resources.

The systemic lack of transparency that currently pervades land-based investment amplifies the challenges of promoting more responsible investment. OpenLandContracts.org seeks to reduce this lack of transparency by providing easy access to publicly available land contracts, and by equipping stakeholders with the tools necessary to understand such contracts.

Among other features, the repository allows users to view and download contracts, and to search for specific types of contracts. Every contract in the repository has been (or is in the process of being) transcribed into text, thereby enabling searches within the text of contracts as well.

Because land contracts can be dense and complex, OpenLandContracts.org also provides plain-language summaries of each contract’s key fiscal, social, environmental, operational, and human rights terms. Other resources to facilitate understanding, such as a Guide to Forestry Contracts, are also available on the website. 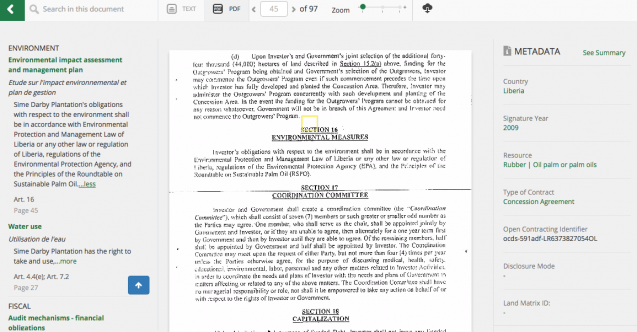 Innovative solutions are needed to ensure that the information gained through disclosure leads to better outcomes on the ground. To this end, two grants of $10,000 each are being offered for the purpose of developing innovative uses of the repository and the content available through it. The OpenLandContracts.org team is currently seeking proposals for projects that make use of the repository to promote more sustainable land-based investments, support different stakeholders in understanding investments and their implications, or provide new insight into such investments. Applications should be submitted to the Columbia Center on Sustainable Investment by March 31, 2016.

An important step on the path to broader reform

OpenLandContracts.org is a potential “game changer” in the path to broader reform of land deals. Disclosure of contracts is only one tool, however, with inherent limitations. More nuanced and careful engagement by all relevant stakeholders, particularly investors and governments, will be necessary to improve outcomes on the ground and promote more responsible and sustainable investment in agriculture and forestry.

Jesse Coleman is a legal researcher for the Columbia Center on Sustainable Investment, focusing on investment law and policy, natural resources, and the intersection between human rights and sustainable development.

OpenLandContracts.org is a joint project of the Columbia Center on Sustainable Investment (CCSI) and the World Bank. It is a sister site to ResourceContracts.org, an online repository of oil, gas, and mining contracts that was created by the Natural Resource Governance Institute, the World Bank, and CCSI. The project is supported by UKaid from the Department for International Development.

This blog was originally posted on the Earth Institute's State of the Planet.