Addressing gender disparities in the context of land reforms is not easy. Effectively addressing gender issues takes time and effort, which can sometimes make it more expensive in the initial stages of a project or program. However, evidence shows that integrating gender throughout land reform interventions not only increases benefits for women, but strengthens the intervention overall. Meaningfully including gender into land reform approaches often requires a change in behavior among decision-makers and program participants that, in some cases, may take years, even decades. In the meantime, land reforms can sometimes move faster than changes in gender stereotypes that impede women’s land rights. If land reform efforts and the donors that support them do not urgently and specifically focus on the inclusion of gender issues, these reforms may solidify and perpetuate land rights inequities for women and girls. 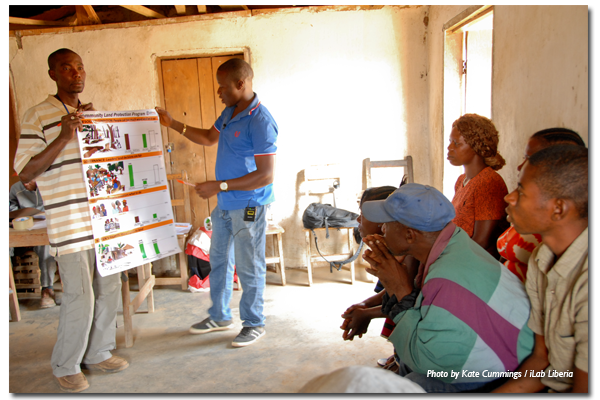 In Liberia, the community organizers for USAID’s Land Governance Support Activity (LGSA) program on community self-governance understand this. In a packed meeting room in LGSA’s office in January 2018, women and men community organizers engaged in an interactive gender and women’s land rights training, sharing stories, challenges and approaches to addressing gender discrimination in customary land governance. The discussions grew lively as participants tackled difficult issues and challenged their own beliefs around gender and land rights. In the midst of a discussion on whether special efforts should be made to secure women’s rights to land, one woman organizer coined the phrase “full rights for all,” which the group enthusiastically agreed should be the goal of all community-level efforts to implement Liberia’s 2013 Land Rights Policy.

Achieving full rights for all requires a deep understanding of the status quo, including who does and does not have rights within both formal and customary systems. To fully understand this context, LGSA and its partners recently completed report on Women’s Land Rights in Liberia. The report draws on past and recent USAID-led research on customary norms, as well as legal analysis, including statutes related to land, family matters, succession, immigration, and Supreme Court case law related to land and gender. In addition, the report incorporates 2017 field research, conducted in three counties by a joint team from LGSA, Landesa, the Female Lawyers Association of Liberia, and the Women’s NGO Secretariat of Liberia. Key findings from the study include:

While more research must be done to inform gender-equitable implementation of Liberia’s Land Rights Policy, the LGSA report on Women’s Land Rights in Liberia is part of a growing movement among donors, civil society, and the Liberian Land Authority to seriously consider gender disparities in the land reform process and their impact on sustainable development. Like the LGSA community organizers, people representing a range of institutions in Liberia increasingly realize that moving forward toward community land governance without a gender-responsive plan in place would compromise the end goal of the reforms, including gains in productivity, and food security.

As Liberians chart a path forward toward gender-equitable and responsive land governance, USAID will support the shared vision of socially inclusive land reform that could become a model for other countries and contexts. The Women’s Land Rights Study represents an important milestone in this regard.

Learn more about USAID’s work on land rights in Liberia.