A significant pattern of abuse has emerged in a wide variety of countries, in which both physical violence and legal prosecution are used against Indigenous Peoples defending their rights and lands, according to a new report that UN Special Rapporteur on the Rights of Indigenous Peoples Victoria Tauli-Corpuz submitted to the UN Human Rights Council today.

The report describes how private sector interests collude with governments in coveting the lands of Indigenous Peoples for economic development projects. “Criminalization”—the process of turning those defending their land rights into criminals—has become an increasingly common tool and contributes to how these disputes often transform into open conflicts. While the majority of indigenous individuals who face criminal charges are men, women bear the brunt of their absence as they have to single-handedly assume all responsibilities in their families and communities.

“I’ve been alerted to hundreds of criminalization cases from nearly every corner of the world,” said Tauli-Corpuz. “The rapid expansion of development projects on indigenous lands without their consent is driving a global crisis. These attacks—whether physical or legal—are an attempt to silence Indigenous Peoples voicing their opposition to projects that threaten their livelihoods and cultures.” 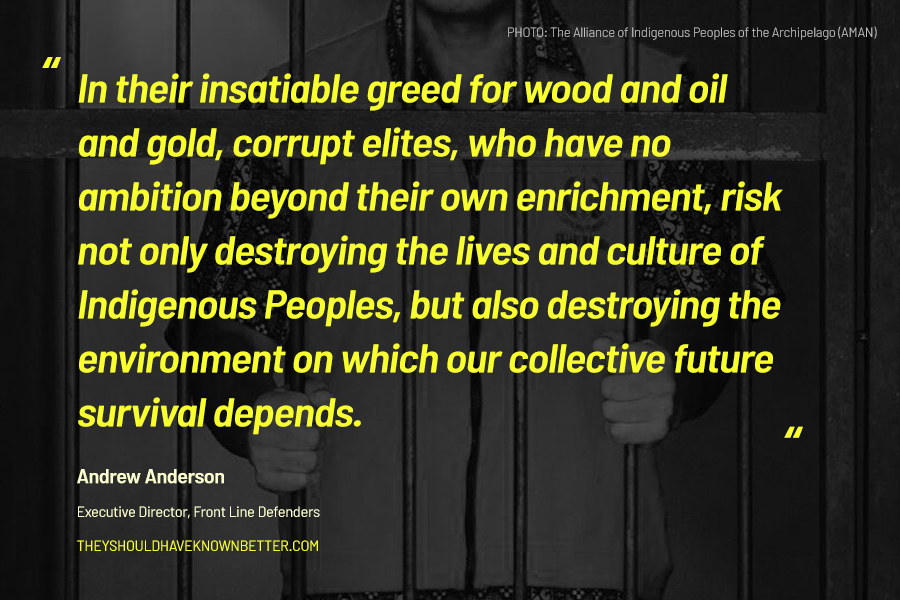 Since June 2014, when her tenure as Special Rapporteur began, Tauli-Corpuz has witnessed a significant uptick in cases of criminalization and violence in the Philippines, as well as in Brazil, Colombia, Ecuador, Guatemala, Honduras, India, Kenya, Mexico, and Peru.

Many of the worst violations are driven by rising militarization, national security acts, and anti-terrorism legislation. These can put Indigenous Peoples in the line of fire—literally—of army and police forces. During and shortly after her most recent official country visit to Guatemala in May 2018, seven indigenous leaders were killed. Another activist was murdered just two weeks ago.

“Indigenous leaders in Guatemala who raise their voices face arbitrary detention, torture and sexual harassment from the police, and even murder,” said Aura Lolita Chávez Ixcaquic of the Maya K'iche' People for the Defense of Life, Mother Nature, Land and Territory. “The justice system not only fails to address our concerns—it is a tool for the state and private interests to attack the authorities and leaders of our communities.”

The Special Rapporteur herself was one of 600 people labeled a terrorist in a legal petition filed in her native Philippines by President Rodrigo Duterte’s government. Although her name and three others were removed from the petition—in the week before her criminalization report was expected to be released—the vast majority of people on the petition remain blacklisted.

Ms. Tauli-Corpuz has noted that the charges were retaliation for her advocacy on behalf of displaced Indigenous Peoples in the Mindanao region of the Philippines, who have faced criminalization and military actions for resisting coal mines and other developments targeting their lands.

“There is widespread impunity for those who commit violence against Indigenous Peoples,” said Anne-Sophie Gindroz, RRI Facilitator for South East Asia. “At the same time, justice systems can be used against indigenous human rights defenders. In Indonesia, for example, people have been arrested for remaining on their land after it was granted to palm oil companies by the government.”

The report notes that violence and criminalization can even extend to lawyers and civil society advocates working with Indigenous Peoples. Gindroz, a longtime indigenous activist, was expelled from the Lao People’s Democratic Republic.

“In 2016, I had to flee my country, and my entire organization went underground,” said Alfred Brownell, founder of Green Advocates, an organization of lawyers, community mobilizers, and women that advocates for the land rights of Liberia’s rural communities and the environment. “These communities are not opposed to development, but they want a say in what happens to the lands they have called home for generations. Some 3 million Liberians depend on customary territories, but their rights are in limbo until we pass vital legislation that has been debated for four years now.” 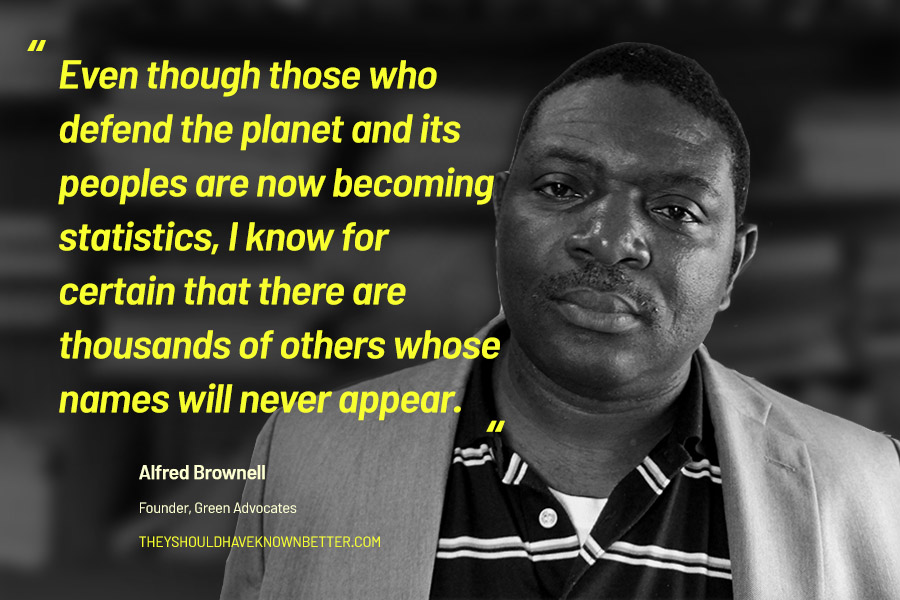 Across the world, laws are stacked against Indigenous Peoples. A new report from the World Resources Institute finds that the process to formalize indigenous and community land rights is extremely costly and complex, sometimes taking up to 30 years—while companies can typically secure long-term rights to land in as little as 30 days.

While the majority of recorded cases were associated with opposition to business interests, in other instances Indigenous Peoples’ ways of life are deemed illegal in the name of conservation, leading to arrests, forced evictions, and other human rights violations.

“Conservation has been given as an excuse for escalating violence against the Sengwer Indigenous Peoples living within their ancestral lands in the Embobut forest in Kenya. Some have even been killed,” said Yator Kiptum, Executive Coordinator of the Sengwer Indigenous Peoples Programme. “The Kenyan Forest Service has repeatedly forcefully evicted and burned Sengwer homes and arrested community members—in spite of the fact that the court issued an injunction to prevent such evictions. Sengwer Indigenous Peoples want to live in, govern, manage, and own their ancestral lands working hand in hand with the government and other stakeholders—this is the only way to ensure sustainable conservation of forests. Eviction will only lead to further destruction.”

From defamation to indefinite detention and worse, despite UN treaties

Criminalization typically occurs as part of the government “push back” when Indigenous Peoples oppose large-scale projects. Leaders are targeted as a strategy to suppress and silence entire communities. While the process can vary, it often follows a similar pattern:

The report lists a number of international treaties and conventions that provide protections for the rights of Indigenous Peoples and local communities. These agreements include:

To prepare the report, the Special Rapporteur drew from both primary and secondary sources, information received first-hand during country visits, a public call for submissions, and a two-day expert consultation in Geneva in March 2018. In addition, a consultation meeting with indigenous representatives took place on the side-lines of the Permanent Forum on indigenous issues in April 2018.

Violence continues to add up

Global Witness documented 207 killings of land and environmental defenders in 2017—the worst year on record—with agribusiness as the industrial sector linked to the most killings. Twenty-five percent of those killed were indigenous.

The failure of states to recognize the land rights of Indigenous Peoples drives this violence, and can lead to them being labeled trespassers in their own homes and evicted from the lands that form the basis of their livelihoods, social cohesion, and spiritual traditions. Indigenous Peoples and local communities customarily claim more than 50 percent of the world’s land but only have legally recognized rights to 10 percent.

“What is happening now across the world is nothing less than a systematic attack on peasant communities and Indigenous Peoples,” said Front Line Defenders Executive Director Andrew Anderson. “In their insatiable greed for wood and oil and gold, corrupt elites, who have no ambition beyond their own enrichment, risk not only destroying the lives and culture of Indigenous Peoples, but also destroying the environment on which our collective future survival depends.”

Victoria Tauli-Corpuz (The Philippines), the UN Special Rapporteur on the Rights of Indigenous Peoples, is an indigenous leader from the Kankana-ey Igorot people of the Cordillera Region in the Philippines. As an indigenous leader, she has worked for over three decades on building movement among indigenous peoples and as an advocate for women's rights. Tauli-Corpuz is the former Chair of the UN Permanent Forum on Indigenous Issues (2005-2010). She was actively engaged in drafting and adoption of the UN Declaration on the Rights of Indigenous Peoples in 2007.