When Manjari was 23, she was elected the first woman pradhan in her village as well as in all of Himachal Pradesh. She hasn't looked back since.

It’s a crisp winter morning in the mountain village of Ribba in Kinnaur district, Himachal Pradesh. I walk up a hill, looking for the house where Rattan Manjari lives. I ask an elderly woman for directions, and she walks me to a cottage painted in crimson and cream, overlooking an orchard filled with yellowing apple trees and grape vines. I’m here to meet Manjari, 67, a social activist who has become the voice of tribal women in their struggle for property rights.

Manjari meets me in a woollen salwar kameez with a teal jacket, sporting a green-grey Kinnauri topi. She’s been busy preparing for a satsang ceremony at her brother’s house, which is next door. We sit on stools in her front porch, and we chat while she peels and slices a Kinnauri apple for me. This one is from the orchard she co-owns with her brother.

Tribal women from Himachal Pradesh still don’t have the right to inherit property, so how did she come to own land?

Her eyes light up; it’s a story she wants to tell. Her mother’s family owned a considerable amount of land. In one of her later years, her mother bequeathed Manjari and her younger brother a part of it. This was and remains an exceptional act: to this day, women can’t stake claim to family property in the districts of Kinnaur, Chamba and Lahaul Spiti. This is the legacy of a 93-year-old customary law called Wajib ul Urj, which only allows men to inherit ancestral property, and even sidelines widows.

Manjari was born in 1952 and was raised by her unconventional mother. “From the very beginning, my mother inspired me. Back in the day, she was a sarpanch. She was better educated and knew Tankri and Urdu. She was very religious and social. I developed an interest in social work in my childhood,” she says.

When most girls were expected to stay at home, Manjari’s father, a retired army colonel, and her mother sent her to school. Later, she obtained a college degree through distance learning.

She looked up to Indira Gandhi when the latter was India’s prime minister. “I thought if she could run the nation, then why couldn’t I too work for my village?”

When Manjari was 23, she was elected the first woman pradhan in her village as well as in all of Himachal Pradesh. “People said why choose a woman when there were so many men around? They were very surprised when I won.” She was reelected three more times as the pradhan, and was elected thrice as a member of the zila parishad.

The status of women has always been unequal in Kinnaur. “Earlier, we practiced the polyandry system to keep property within the family. With the rise of education and development, society began to change slowly and people began to enter monogamy.”

She founded the Mahila Kalyan Parishad (MKP) in 1989, and through its work met several single women in the community who were struggling for survival. She discovered women were reluctant to approach the courts to settle property disputes because they thought they’d be washing their dirty linen in public. “Nowadays, we see that men support neither their mothers nor their sisters,” she said. “Not all women are financially well off. Men think that owning family property is their birthright.”

Today, “the government provides pensions to single women but these are nominal and barely enough for survival. These days, we have NREGA, which helps women get daily-wage work so they can make ends meet. In old age, they face difficulties when they are treated as a burden and aren’t cared for.”

The MKP has a membership-based collective, or sangathan, of women spread across the district. In their visits to villages, her colleagues discuss various issues, such as education, health and sanitation, with the villages’ residents, and share information about welfare schemes and advocate for women’s right to property. In the past, they have undertaken signature campaigns in which as many as 10,000 women signed up demanding property rights. The MKP later presented the resulting petitions to local politicians and the governor.

That said, local political leaders have all shied away from the issue, and have neither taken a public stand in favour of women’s property rights nor extended their support or endorsement of Manjari’s cause. The likely reason – Manjari agrees – is that they don’t want to upset their respective vote-banks.

Support for her has come from her family, including her brothers, who have always stood by her side. Her principal resistance has come from local men. “People are scared of losing their property to women and non-tribals, but men are also leaving Kinnaur and buying property outside and settling in Solan,” Manjari said. “They are marrying women from other communities, so it is obvious that women will also go outside.” 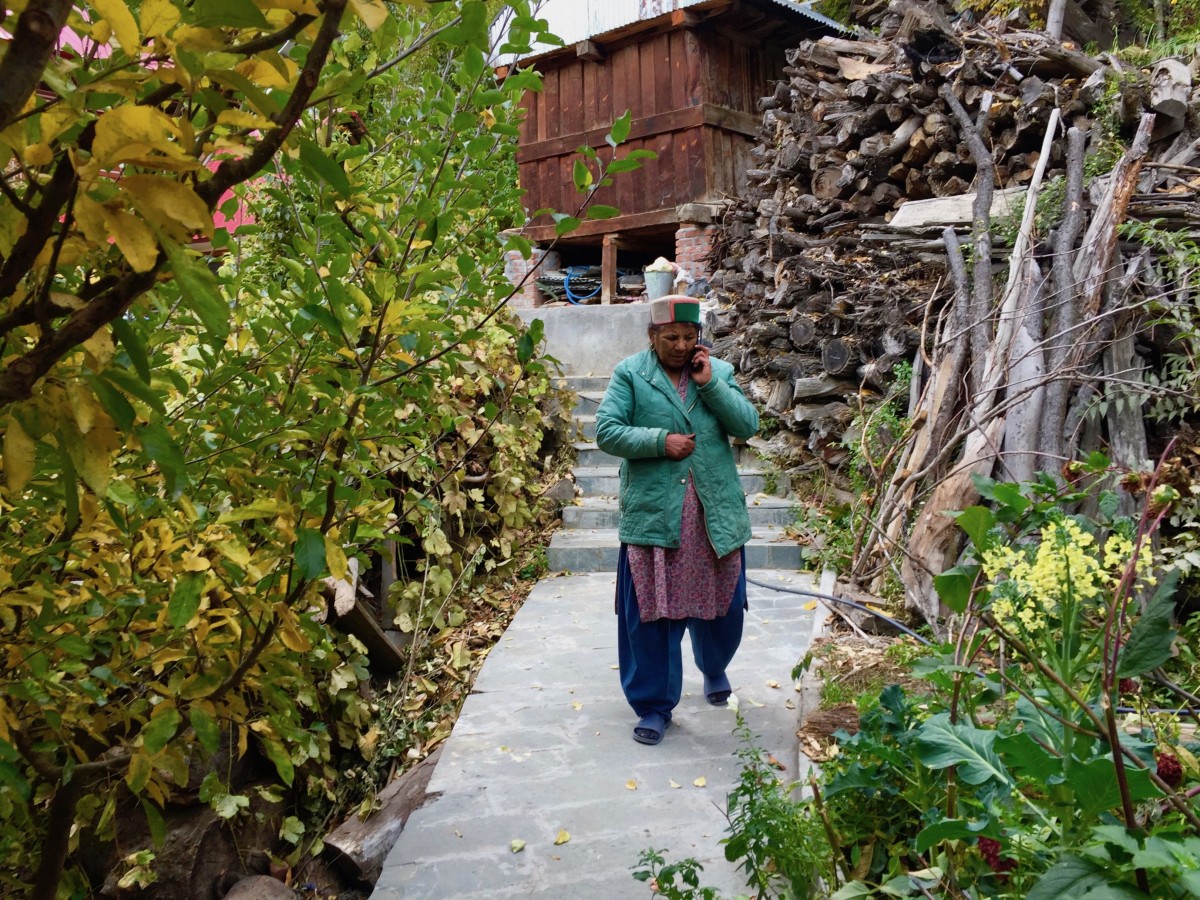 The legal battle for tribal women’s property rights began with one particular case. In October 2002, a district judge in Chamba passed an order granting property rights to the daughters of a man from the Gaddi tribe. One of the man’s sons appealed this judgment in the Himachal Pradesh high court in 2003. In 2015, Justice Rajiv Sharma upheld the district judge’s orders favouring the daughters, in the process setting a precedent for all tribal women in the state to inherit property in accordance with the Hindu Succession Act of 1956.

Manjari had never met the women involved in the case but she publicly supported the case’s outcomes, and was instrumental in spreading its message among the many women she met. In February 2016, two petitioners from Lahaul Spiti challenged this judgment in the Supreme Court; the apex court stayed the high court’s order and the case is now pending.

In 2017, Manjari and the MKP filed a public interest litigation under Article 32 (right to constitutional remedies) in the Supreme Court, demanding property rights for tribal women in Himachal Pradesh. It was withdrawn after one hearing in 2018.

An individual associated with the case said (on condition of anonymity) that many of the state’s people are opposed to giving women the right to own land because tribal areas are becoming more valuable for planting apple orchards. If women are granted land, apple growers and traders fear the orchards will become fragmented and family incomes will drop. Some residents of Kinnaur this author spoke to reasserted these sentiments.

Manjari herself had struggled to find a lawyer to represent MKP, and the legal community in Shimla was hostile towards her. MKP was finally able to file its petition in the high court a year later, in April 2019, under Article 226 (which includes both fundamental rights and other legal rights).

“Apple farming is completely under men’s control. But it is the women who do more than half the work – sowing, tilling, weeding, caring for the plants, watering them, etc. Men take the produce to the market and collect the money. Women have to ask them for money.”

According to a study published in 2016, “Changing climatic conditions such as increase in temperature and decrease in precipitation have inﬂuenced apple cultivation in Himachal Pradesh,” and the area under apple production has reduced.

This year, the apple harvest in Manjari’s village was lower relative to last year, thanks mostly to pests and crop diseases.

“A changing climate will affect women the most. It will impact their health. They will not get enough nutrition. In such a situation, getting property rights for women becomes even more important so that women can decide what to grow for themselves,” she explains.

If women have land, according to her, they can rent it out or take loans under the kisan credit card scheme to launch their own small businesses.

There was a time when Manjari would go village to village by herself, but now, she’s less able to dismiss the exhaustion that comes with time. At the same time, she’s not thinking of retirement. “I want to retire but I have a lot to do. People don’t want me to stop. I will keep going until I have the energy.”

She’s even more determined to see the PIL through, and willing to approach the Supreme Court if the high court pronounces an unfavourable verdict. “We are also thinking of meeting Prime Minister Modi in Delhi,” she says.

Manjari acknowledges her privilege, and is deeply grateful to her mother for her gift of land. Now she hopes it will bear, with her help, the justice Himachal Pradesh’s tribal women are looking for.

Vandana K. is an independent journalist and producer based in New Delhi.