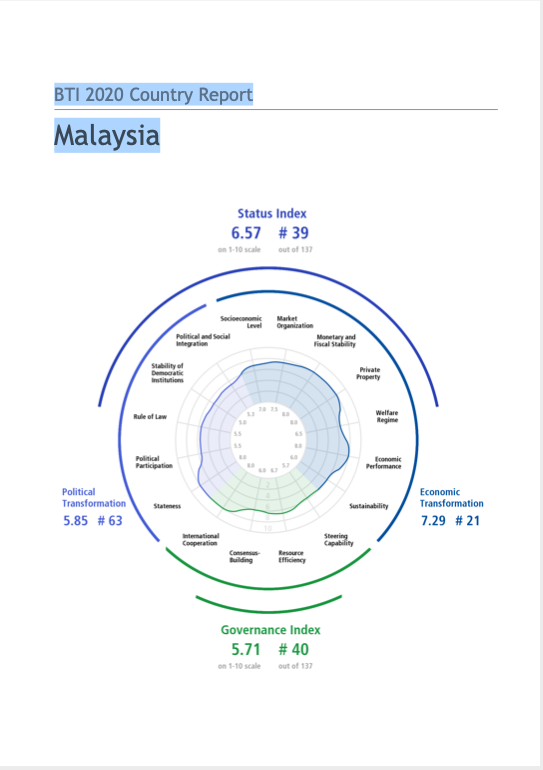 Malaysia’s democratic transformation took a historical turn between 2017 and 2019. The opposition coalition, the Pakatan Harapan (Alliance of Hope, PH) won the May 9, 2018, general elections, setting the stage for Mahathir Mohamad, the chairman of the coalition, to become the 7th prime minister of Malaysia (he had previously served as the 4th prime minister). This was the first victory by an opposition coalition after 61 years of rule by the Barisan Nasional (BN) coalition led by the United Malays National Organization (UMNO). The power shift not only ended one of the world’s longest runs of one-party rule, it was also in stark contrast to the global trend of democracies being tested by populist politics. The PH coalition not only succeeded at the federal level, but also won elections in eight out of 13 states, including Johor, UMNO’s former stronghold. PH has 129 members in parliament (out of 222), a solid majority, especially after several UMNO members defected to the PH coalition. The BN, one of the longest and most stable ruling coalitions in the world, has been left shattered: it now consists of only three parties, compared to 13 before the elections. The BN currently holds 40 seats in parliament. After the elections, former Prime Minister Najib Razak stepped down as chairman of the BN and subsequently faced criminal charges for his role in the massive scandal involving a state development fund, 1Malaysia Development Berhad (1MDB), and was temporarily imprisoned. Immediately following the general elections, longtime opposition leader Anwar Ibrahim received a royal pardon from the Malaysian monarch and was released from prison. In October 2018, Ibrahim won a by-election and returned to parliament. Unrelated to the outcome of the general elections, but also indicative of the high volatility of the Malaysian political landscape during the review period, the 15th Yang di-Pertuan Agong, the monarch and head of state in Malaysia, Muhammad V of Kelantan, unprecedentedly abdicated as head of state in January 2019. His term should have ended on December 12, 2021. Muhammad V was followed by Sultan Abdullah of Pahang, who was elected by the Conference of Rulers on January 24, 2019.

Malaysia’s economic transformation from 2017 to 2019 was, in contrast, less tumultuous. Nonetheless, repercussions from BN’s electoral defeat and the 1MDB scandal were also visible in the economic sphere. The political transformation and the announcement of economic reforms impacted foreign-investor confidence in the country’s prospects. Although the ringgit (MYR) has performed better in the last two years than in the period before, high government debt and several economic reforms undertaken by the new PH government (e.g., the abolishment of the goods and services tax, GST) indicate that Malaysia still has a long way to go before its economic transformation can be seen as completed. Overall public debt as a percentage of the GDP was 50.9% in 2017, down from 52.7% in 2016; for 2019, the government is aiming at 51.8%. Credit rating agency Moody’s highlighted that Malaysia’s overall public debt as a percentage of the GDP was high compared to other countries with an “A” sovereign credit rating, since the median for A- rated sovereigns is 41%. Even so, the newly elected government does not plan to change Bumiputera affirmative action policies, which still strongly influence Malaysia’s market economy. As a consequence, the impact of the PH government will be more strongly felt in the political than in the economic sphere.