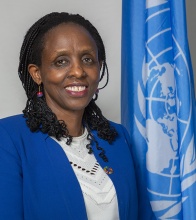 As the UN Secretary-General’s Special Envoy, Dr. Kalibata works with the United Nations system and key partners to provide leadership, guidance and strategic direction towards the 2021 Food Systems Summit. She is responsible for outreach and cooperation with key leaders, including governments, to ensure the Summit serves as a catalytic process within the Decade of Action to improve food systems around the world to deliver on the Sustainable Development Goals (SDGs) and Paris Agreement.

Born in Rwanda to smallholder farmers displaced during the struggle for independence in the early 1960s, Dr. Kalibata grew up at a refugee camp in Uganda, where her parents grew beans and maize, and kept cows. The education of Dr. Kalibata and her siblings was funded through the family’s income from agriculture, ultimately allowing her to study entomology and biochemistry at Makerere University before earning her PhD from the University of Massachusetts Amherst.

After graduating, Dr. Kalibata joined the International Institute of Tropical Agriculture (IITA) at Kawanda Agricultural Research Institute, where she started a career as a research scientist through a combination of research and study between IITA and Makerere University, and the IITA and University of Massachusetts, before returning to Rwanda to become the Minister of Agriculture and Animal Resources (MINAGRI) from 2008 to 2014. In this time, Dr. Kalibata drove programs that supported smallholders like her father and helped the country recover from continued impact of the 1994 genocide to food security.

The success of Dr. Kalibata’s tenure as agriculture minister contributed towards moving her country from a food insecure to a food secure status, becoming a reference point for other countries that sought to deliver agriculture transformation.

Since 2014, Dr. Kalibata has also served as President of the Alliance for a Green Revolution in Africa (AGRA), where she leads the organization’s efforts with public and private partners to ensure a food secure and prosperous Africa through rapid, sustainable agricultural growth, improving the productivity and livelihoods of millions of smallholder farmers in Africa.

Dr. Kalibata has a distinguished track record as an agricultural scientist, policymaker and thought leader. She has been awarded the Yara Prize, now the Africa Food Prize; an Honorary Doctorate from the University of Liège; an Honorary Doctorate from McGill University; and the Public Welfare Medal of the National Academy of Sciences for her work to drive Africa’s agricultural transformation through modern sciences and effective policy thereby improving livelihoods of smallholder farmers.