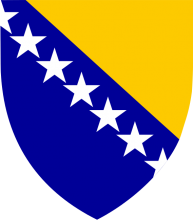 Bosnia and Herzegovina declared sovereignty in October 1991 and independence from the former Yugoslavia on 3 March 1992 after a referendum boycotted by ethnic Serbs. The Bosnian Serbs - supported by neighboring Serbia and Montenegro - responded with armed resistance aimed at partitioning the republic along ethnic lines and joining Serb-held areas to form a "Greater Serbia." In March 1994, Bosniaks and Croats reduced the number of warring factions from three to two by signing an agreement creating a joint Bosniak-Croat Federation of Bosnia and Herzegovina. On 21 November 1995, in Dayton, Ohio, the warring parties initialed a peace agreement that ended three years of interethnic civil strife (the final agreement was signed in Paris on 14 December 1995).

The Dayton Peace Accords retained Bosnia and Herzegovina's international boundaries and created a multiethnic and democratic government charged with conducting foreign, diplomatic, and fiscal policy. Also recognized was a second tier of government composed of two entities roughly equal in size: the predominantly Bosniak-Bosnian Croat Federation of Bosnia and Herzegovina and the predominantly Bosnian Serb-led Republika Srpska (RS). The Federation and RS governments are responsible for overseeing most government functions. Additionally, the Dayton Accords established the Office of the High Representative to oversee the implementation of the civilian aspects of the agreement. The Peace Implementation Council at its conference in Bonn in 1997 also gave the High Representative the authority to impose legislation and remove officials, the so-called "Bonn Powers." An original NATO-led international peacekeeping force (IFOR) of 60,000 troops assembled in 1995 was succeeded over time by a smaller, NATO-led Stabilization Force (SFOR). In 2004, European Union peacekeeping troops (EUFOR) replaced SFOR. Currently, EUFOR deploys around 600 troops in theater in a security assistance and training capacity.

Bosnia and Herzegovina is a parliamentary republic.

Government of Bosnia and Herzegovina Resources

This Law amends and adds some provisions to the Law on property rights (Official Gazette of the Republic of Srpska 124/2008, 58/2009 and 95/2011).Major changes are as follows: (article 346) related to the legal interaction with the principles and provisions of the Law on cadaster; (article 348) immovable property owned by the Republic and/or local self-government units may be alienated below the market price or free of charge and for the realization of an investment project of particular importance for regional or local economic development; (added article 348a) in order to overcome the con

This Law amends various provisions prescribed by the Law on inspections of the Brcko District (Official Gazette 24/2008 and 25/2008).Major changes are related to the general terms and definitions, and various technical standards and official requirements of the specific inspection duties.

This Regulation prescribe the methods, form and content, data collection and official records delivery rules regarding the agricultural land present on the territory of the Federation of Bosnia and Herzegovina, namely classified by: cadastral cultures and cadastral classes; surface and purpose for which uses change; land consolidated surfaces; hydro-ameliorated surfaces; ownership structure; uncultivated, abandoned and mined areas; and surfaces used, managed and/or disposed by a legal entity.The Annex is an integral part of this Regulation.

This Law establishes: definitions, basic principles and management, protection, use, development, data collection, supervision, as well as other important issues related to agricultural land on the territory of the Federation of Bosnia and Herzegovina.Agricultural land is a natural resource of common interest, that enjoys special protection, used for agricultural production and may not be used for other purposes, except in cases and under conditions here established.The major objectives of this Law are the: adoption of sustainable principles, production capacity and management improvement,

This Regulation prescribe the necessary contents of the documentation and administrative forms that are to be included when drafting/preparing the forest or forest land communication projects (such as the construction of forest road for vehicles, reconstruction of forest truck routes and tractor/trailway paths).As defined by this text, forest communications/connections are primary used for forestry purposes as well as for the needs of the local population.

This Regulation hereby prescribes the mandatory supervision rules, aimed at the control over the execution of the preparation of forest-economic documents or plans (for private and state owned forests).Forest-economic planning documents are projects assignment for the preparation of the forest-economic basis, including the classification of forests and forest land in ecological-productive terms, with the aim of determining the technical objectives of forest management (such as creation of spatial units, the marking of their boundaries in the field, the recording of boundaries and their mapp

This Regulation sets the conditions governing the procedures and terms for obtaining the lease of specific forest land parcel if public/state owned; and only if not previously assigned/intended for different purpose (if not part of the area covered with strategic environmental or planning documents).This Regulation provides for administrative requirements, economic related provisions, procedural issues and contents for contracts to be stipulated in relation with lease requests.

This Law lays down the general interest principles regarding the acquisition, seizure, use, disposal, protection and termination of rights on property, including several deriving real estate/physical property rights, also in relation with state property (public land).