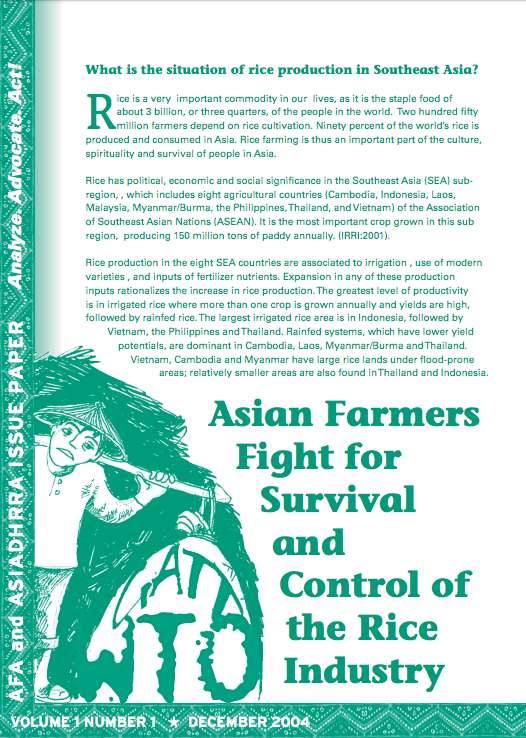 Rice is a very important commodity in our lives, as it is the staple food of about 3 billion, or three quarters, of the people in the world. Two hundred fi fty million farmers depend on rice cultivation. Ninety percent of the world’s rice is produced and consumed in Asia.

Rice farming is thus an important part of the culture, spirituality and survival of people in Asia. Rice has political, economic and social signifi cance in the Southeast Asia (SEA) subregion, , which includes eight agricultural countries (Cambodia, Indonesia, Laos, Malaysia, Myanmar/Burma, the Philippines, Thailand, and Vietnam) of the Association of Southeast Asian Nations (ASEAN). It is the most important crop grown in this sub region, producing 150 million tons of paddy annually. (IRRI:2001).

Rice production in the eight SEA countries are associated to irrigation , use of modern varieties , and inputs of fertilizer nutrients. Expansion in any of these production inputs rationalizes the increase in rice production. The greatest level of productivity is in irrigated rice where more than one crop is grown annually and yields are high, followed by rainfed rice. The largest irrigated rice area is in Indonesia, followed by Vietnam, the Philippines and Thailand. Rainfed systems, which have lower yield potentials, are dominant in Cambodia, Laos, Myanmar/Burma and Thailand. Vietnam, Cambodia and Myanmar have large rice lands under fl ood-prone areas; relatively smaller areas are also found in Thailand and Indonesia.

AsiaDHRRA traces its earliest roots to the 1974 Development of Human Resources in Rural Asia Workshop (DHRRAW) held in Thailand. It is a regional partnership of eleven (11) social development networks and organizations in eleven (11) Asian nations that envisions Asian rural communities that are just, free, prosperous, living in peace and working in solidarity towards self-reliance. To achieve this, the network’s mission is to be an effective