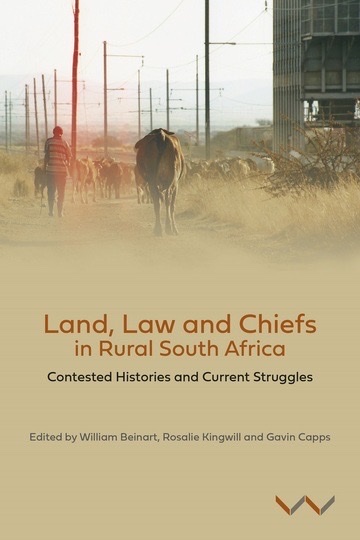 Land, Law and Chiefs in Rural South Africa analyses contestations of power and control over land through the lens of local case studies in the densely settled former African ‘homelands’ or Bantustans. These were areas reserved for African occupation by the apartheid government and when the ANC came to power in 1994, they were the poorest and least developed parts of the country. Over the last few decades, mineral deposits have been exploited and some are located close to the boundaries of rapidly expanding cities, such as Durban, where peri-urban land is at a premium. Such developments have led to competition for land as well as new avenues for accumulation by chiefly and other local elites. Growing numbers of the rural poor are threatened with displacement and dispossession. Disputes are taking place between the state, developers, chiefs, politicians, communities and local landholders about the ownership of resources, about their exploitation, and who should benefit.

Disputes have also resulted from one of the major planks of land reform in South Africa, the Restitution of Land Rights Act (1994), which requires detailed evidence for a land claim and has led to clashes not only with the white owners but within claimant groups about contested histories and control of the land.

The courts are playing an increasingly important role as adjudicators. Their work is often facilitated by interlocutors such as NGOs, academics and human rights lawyers. Implicit in the book’s conception was a concern to reflect on the role of these actors who collect and present evidence on history and land rights. Some have been drawn in by communities and lawyers as researchers who assist in formulating arguments in legal struggles, or act as expert witnesses in court cases. A number of the chapters reflect their experiences and all are concerned with threats to the rights of ordinary people and how the courts have adjudicated cases. History and customary law feature strongly in most disputes and chapters reveal a worrying trend of corporate interests and local elites, particularly chiefs, inserting themselves as major beneficiaries, or suppressing local opposition to their authority.

The book strikes a raw nerve in the politics of contemporary South Africa insofar as it sheds light on the troubled process of land reform and the persistence of past inequalities in access to and control over land. Despite the innovative democratic constitution of 1994, old institutions have not all been displaced. After a brief experiment with democratising rural political structures and institutions in its first term (1994–1999), the ANC government has increasingly turned to chieftaincy as a means of governing the former homeland areas, reproducing apartheid-era jurisdictions. Chiefs have survived the political transition and reasserted their authority in some rural areas. Constitutional recognition of customary law has raised the stakes of how it is used and interpreted in these contestations. Certainly the concept of ‘living customary law’, developed by the constitutional court and human rights lawyers, aims to decolonize earlier patriarchal legacies, but this remains uncertain terrain.

The chapters offer textured and carefully researched case studies that analyse the detail of local struggles, and how local power and authority have been asserted and resisted. Some of the chapters focus on the platinum-mining belt of North-West Province where there have been particularly intense disputes. Eastern Cape cases also feature strongly in connection with restitution and land rights. The chapters suggest that the former homelands have to some degree survived as spaces of identity and traditional power, if not coherent regions. Chiefs have been able to insert themselves as local intermediaries, often with ANC support. This has truncated local democracy with implications for national and provincial patterns of power.  But contributors also show a push back from communities, who protest about infringements on their rights and go to court when they can find supportive lawyers and researchers.

Peter Delius commented that the book is ‘a timely, accessible and deeply researched collection by leading academics and activists in the field. It will be essential reading for all those who want a better grasp of issues which …  are of vital importance to South Africa’s present and future’. Sara Berry notes that it ‘will prove a valuable resource both for practitioners of land reform and for those trying to understand why it is so difficult to achieve’.

Chapter 2: Was ‘Living Customary Law’ There All Along? – Derick Fay

Chapter 4: Chiefs, Mines and the State in the Platinum Belt: The Bapo-ba-Mogale Traditional Community and Lonmin – Gavin Capps

Chapter 6: The Abuse of Interdicts by Traditional Leaders in South Africa – Joanna Pickering and Ayesha Motala

Chapter 8: Black Landlords, Their Tenants and the Natives Administration Act of 1927 – Khumisho Moguerane

The fundamental role of any university is to promote freedom of enquiry and the search for knowledge and truth. Wits has built a reputation for itself in this role, establishing itself at the industrial and commercial heart of South Africa as a centre for education and research of the highest quality.