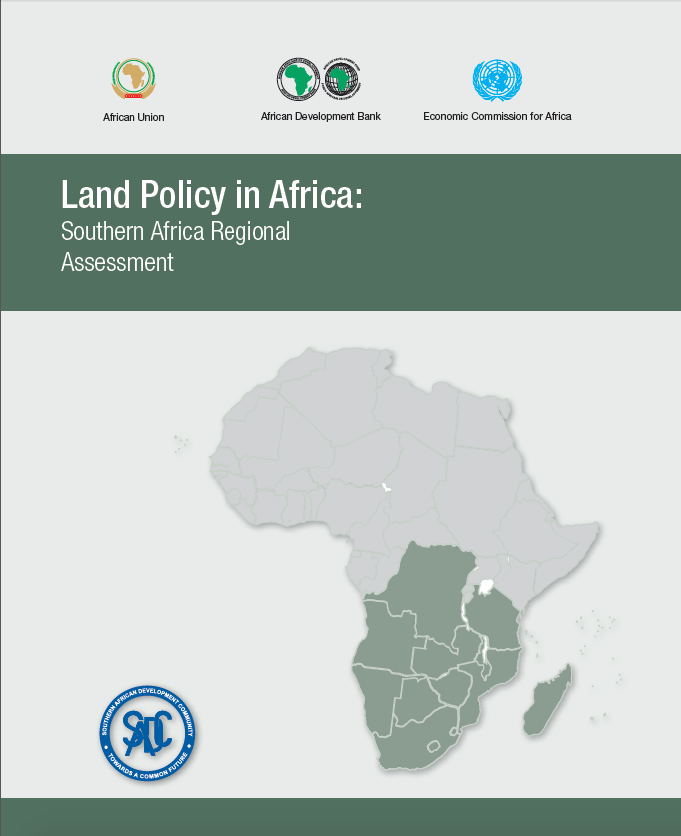 Southern Africa is one of the most well endowed regions in the continent in terms of mineral and natural resources. However, the region is facing serious environmental challenges such as land degradation, deforestation and water stress in specific areas.

The population of Southern Africa is estimated at 185 million people (Democratic Republic of Congo not included). The population is growing rapidly, mainly in urban areas. The rapid urbanization rate is challenged by the need to develop relevant socio-economic infrastructure. In the absence of effective response from the state and local government, informal settlements are mushrooming in urban and peri-urban areas across the region.

The colonial legacy continues to exert a profound influence on land issues in Southern Africa. The entire region was affected by the consequences of colonial land policies such as legal dualism. In addition, former settler colonies in the region suffered massive land dispossession. Accompanying the history of land dispossession was the imposition of hierarchal, inequitable and racially discriminatory land tenure systems. Therefore, key land policy challenges in the region include re-establishing national sovereignty over the land and redressing unequal and race based land distribution. The protection of the commons against land-grabbing and privatization are also major land policy challenges in most countries in the region.

Southern Africa is known as the epicentre of the HIV/AIDS pandemic in Africa and the world. In most countries in the region, the HIV/AIDS prevalence ranges from 12% (Tanzania) to more than 33% (Swaziland). The pandemic has clear impacts on land use, food and tenure security. In affected households, financial resources are diverted from agricultural production to pay for health care and funerals, leading, in some cases to the abandonment of farmlands.

Since the 1990s, the end of apartheid in South Africa, the demise of the socialist system in other countries in the region and the advent of more market-friendly economic policies have driven an intensive process of land policy reform across the region. National land policies are in place in some countries while others have just developed them. The land policy development process is far from being uniform: some countries are considered as models in terms of participatory processes while others followed top-down approaches.

Generally in the region, land is vested in the state. Consequently, the state possesses extensive powers over the land held and used by people under customary law. However, the ongoing land policy development trends give greater recognition to customary tenure systems, even if the development of effective land management systems which protect the rights of local people remains a major challenge.

However good land policies may be, they will be rendered useless if the implementation systems and institutions are not functioning. The implementation process falls under the domain of land administration, a domain where the capacity of countries in the region is very low. The situation is also highly contrasted within the same country as well as within the region. For example, Mozambique is widely regarded as an example of best practice for the implementation process of the 1997 land law, but there are strong concerns about the weakening of local land rights as a result of the awarding of land concessions in certain areas. The fallout from the manner in which Zimbabwe’s fast track land reform programme was carried out since 2000 continues to reverberate through whole the region.

Independent of the individual countries initiatives the Southern African Development Community (SADC), as a regional organization, has established a Land Reform Support Facility. This facility aims to provide support to member states in the formulation and implementation of land policies and programmes in line with their national development priorities. The facility has conducted an assessment of land issues in member states and developed a five-year phased programme that started in 2007 and covers the following four major areas: policy formulation and implementation; capacity building; information and communication; and research.

The overarching objective of the African Development Bank (AfDB) Group is to spur sustainable economic development and social progress in its regional member countries (RMCs), thus contributing to poverty reduction.

The Bank Group achieves this objective by:

On 9.9.1999, the Heads of State and Government of the Organisation of African Unity issued a Declaration (the Sirte Declaration) calling for the establishment of an African Union, with a view, inter alia, to accelerating the process of integration in the continent to enable it play its rightful role in the global economy while addressing multifaceted social, economic and political problems compounded as they are by certain negative aspects of globalisation.

The African Land Policy Centre, formerly called the Land Policy Initiative (LPI), is a joint programme of the tripartite consortium consisting of the African Union Commission (AUC), the African Development Bank (AfDB) and United Nations Economic Commission for Africa (ECA). Its purpose is to enable the use of  land to lend impetus to the process of African development. The programme is governed by a Steering Committee that meets periodically, while a joint secretariat implements day to day activities. The secretariat is assisted by an African Taskforce on Land.

The African Land Policy Centre, formerly called the Land Policy Initiative (LPI), is a joint programme of the tripartite consortium consisting of the African Union Commission (AUC), the African Development Bank (AfDB) and United Nations Economic Commission for Africa (ECA). Its purpose is to enable the use of  land to lend impetus to the process of African development. The programme is governed by a Steering Committee that meets periodically, while a joint secretariat implements day to day activities. The secretariat is assisted by an African Taskforce on Land.